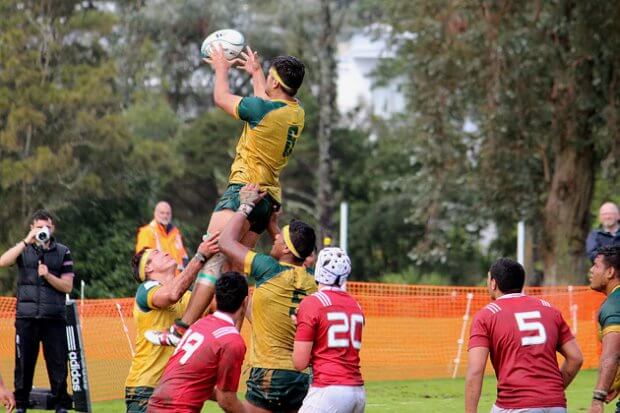 Intrepid Green & Gold reporter “The Honey Badger” was on hand once more to give his report on the match.
.

.
Mt Albert Grammar School has a picturesque, state-of-the-art sporting ground and facilities. The ground was in fair condition for the match following earlier rain, though it was heavy by Aussie standards, and the weather was overcast with showers.

It had a grandstand behind the posts on the Western end which was full, and a large crowd was on hand to watch a double-header – with the other match being NZ Schools v Fiji Schools. 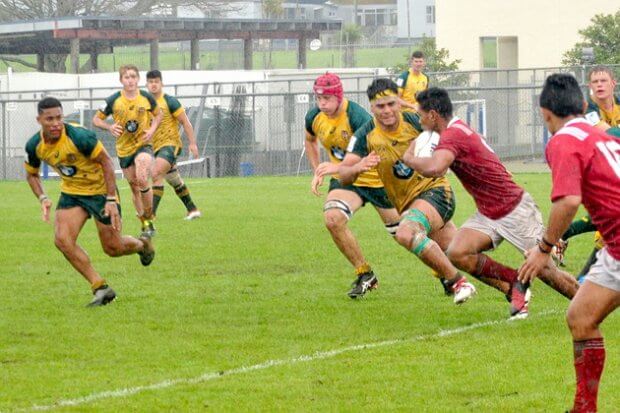 Australia kicked off and after the Kiwis put on some tight play they were penalised, putting the Aussies in the right real estate for an attacking lineout. THP prop Opeti Helu ran powerfully to the line and with a pick and drive LHP Lloyd Gorman crashed over to score.

When 9 Ryan Lonergan converted Australia led 7-0 after five minutes, but the Barbarians earned a scrum penalty in the visitors’ 22 and winger Danny Toala  slotted the goal. 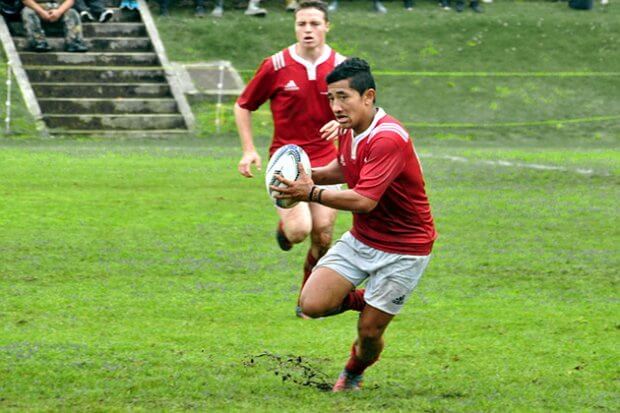 The Kiwis threatened with good field position for some time, and although the Aussies held them for a while, they were rewarded by going for the try and not for the posts. From a lineout maul half-back Folau Fakatava darted from the breakdown to score the home team’s first try.

The conversion by Toala put them ahead 10-7 after 25 minutes but two minutes later Lonergan kicked a 40-metre penalty goal for Australia to tie the score 10-10.

There followed some scrappy play from both sides and you could sense that the young Aussies were not in their preferred habitat, whereas the Kiwi halves were controlling the game well. 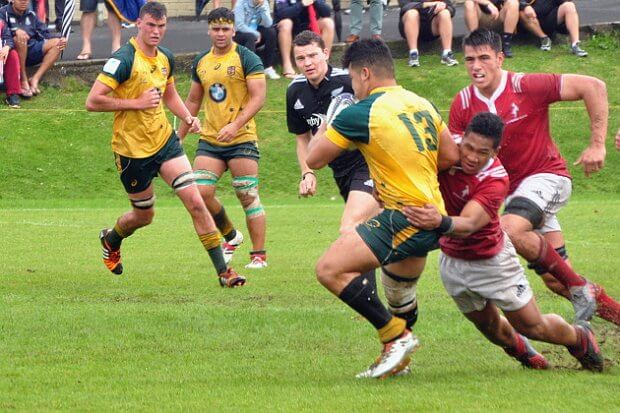 After a well-placed box kick from turnover ball NZ arrived in numbers and turned over the ball again, and winger Connor Garden-Bachop set up a well-worked try for first-five Lincoln McClutchie.  The Toala conversion made the score 17-10 to the Kiwis at 33 minutes.

Things got worse right on halftime for the visitors when they didn’t control a ball after the restart and a McClutchie cross-kick, right on the money, was pinched by  Toala, who scored.  He was arguably offside, but it went on the scoreboard.

It was a killer period for the Australian youngsters .

Danny Toala scores, tackled by James Armstrong after both contested the kick-pass

Australia had a dream start, when 14 Eadie sprinted up the touchline beating his opposing winger before passing inside. Australia were close to scoring before NZ turned the ball over again, near their goal line, and ran it. Australia defended the raid well and it was their time to turn the ball over, from a fumble, and the Australian 13, Hunter Paisami, picked up the loose ball and dotted down.

Isaac Lucas, who had taken over the kicking for the injured Lonegan, converted from the sideline, and the Aussies were back in touch trailing by 17-22 a few minutes in.

Ten minutes into the second half Osborne replaced winger Armstrong. He got into the kicking contest but some of his cannon-ball efforts were too long.

After that the second half was scrappy and the Aussies got a scare after NZ kicked through.  Winger Will Eadie was able to scramble to ground the ball in-goal, but they were under pressure again when the 22 drop-out went directly into touch. 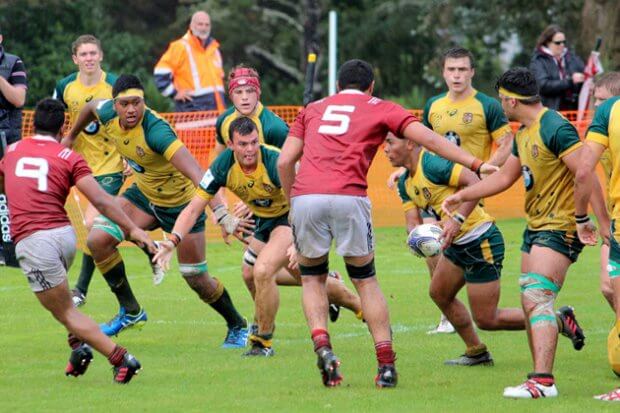 In another danger moment they were able to bundle a Kiwi attacker into touch from a blindside move at scrum-time when a try looked likely.

But New Zealand were applying the pressure and made Australia play deep in their own territory. They deserved their penalty to lead 25-17 with ten minutes to play.

All the subs were on by this stage and Matt Willshire had to come back on to replace injured lock Esei Ha’angana. The reserves did a good job, forcing some turnovers and carrying well, but there was no dividend on the scoreboard.

New Zealand were up to any challenge and kicked a late penalty to put the result beyond doubt. 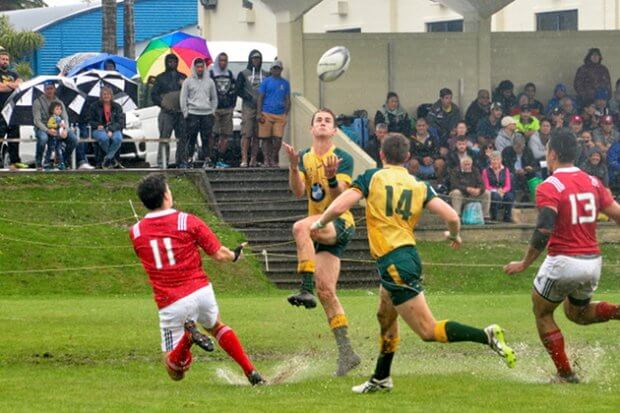 Matt McTaggart takes one of the Kiwi’s high balls

The New Zealand Barbarians were more used to the conditions and played with them better. Their kicking game put Australia under pressure repeatedly—their high roosts and box kicks had chasers trying to turn the ball over when they arrived, according to plan. They got to the breakdown early and were aggressive when they got there.

Australia did not adapt as well to conditions and did not have the kicking game to match the Kiwis. They improved their kicking when Osborne found his range, and they kept New Zealand try-less after the break, but they were unable to trouble the scorers after the Paisami try.

The Aussies struggled to get clean lineout ball, because the Barbarians had their number. They will have to improve the set piece and restarts for the final game, against NZ Schools.

THP Opeti Helu, lock Esi Ha’angana and no. 8 Sunia Finefeuiaki had strong games and 7 Gersekowski had a high work rate as captain. Winger Will Eadie defended well and had some promising runs. 13 Hunter Paisami had a sound match and scored a well-deserved try.

Lock Cameron Suafoa disrupted Australia’s lineout and hooker Ricky Jackson made some good breaks. In the backs scrummie Folau Fakatava, the captain, and first-five Lincoln McClutchie, set up the win with adept kicking games. Winger Danny Toala had a forceful match and kicked his goals well. 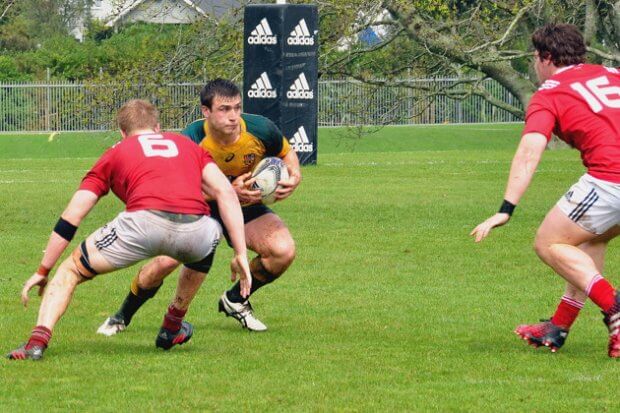 Nick Wilkinson in a tight spot

Thanks for the photos courtesy of the Australian Schools Rugby Union and Getty Images (as identified).  Others  by “The Honey Badger”- thank you sir once again.