Souths head into the match with a number of new faces in the team from the squad that ran out at Ballymore for the Grand Final in 2015, however they will be bolstered by players with National Rugby Championship (NRC) experience in Brisbane City squad members Alex Casey, Andrew Muirhead and Mika Tela, as well as Bond University Queensland Country halfback Scott Malolua.

Eastwood will field their own NRC representatives, with players including Jed Gillespie, Jarred Barry, Cohen Masson and Jai Ayoub having played for the Greater Sydney Rams, as well as 2015 NSW Country flyer Jerome McKenzie. The Sydney club are also the current holders of the Club Championship having beaten 2014 Hospital Cup winners University of Queensland 21-20 in early 2015.

The match will be played at Souths’ home ground, Chipsy Wood Oval, in Annerley this Saturday afternoon. Kick-off at 4:30pm AEST.

For those who can’t make it to the match, Reds TV will be live streaming the encounter via thewww.redsrugby.com.au homepage. 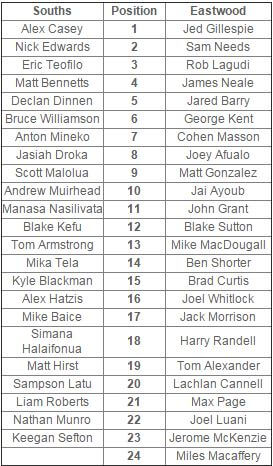