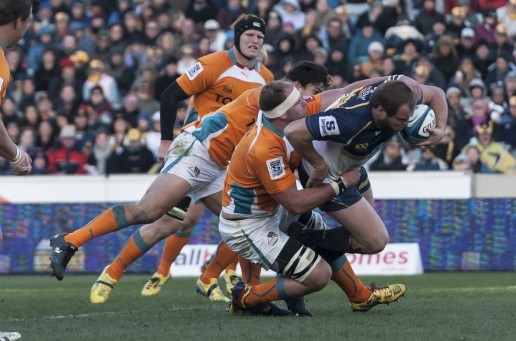 Here it is – the G&GR writers’ Super Rugby team of the week for the Qualifying Finals.

With a great win by the Brumbies and a disappointing Reds loss, who makes this week’s team?

Very strong at the breakdown this week, creating a number of turnovers. Also demonstrated his continually improving scrummaging, absolutely dominating the Cheetahs.

Tried hard in a thoroughly beaten side, showing his strong defence. Also threw immaculately in the line-out to earn the nod over Moore.

A vital cog in a dominant pack. Destroyed opposing loose-head, enabling front foot ball off set-piece for the Brumbies.

Strong in all facets of the game this week, won lineouts, influenced the breakdown and provided a strong running game. Also got through a momentous 15 tackles, the most in the team.

With Horwill clearly hampered by injury, Carter gets in this week with his consistent hard-working and mistake-free game.

Great game by Kimlin, who was a definite attacking linchpin. Involved from the start with a number of close-in runs. Consistently managed to generate quick ball when in average positions with good footwork and strength.

A bright spark in a disappointing loss. Stood up big time, giving the Reds steals, important tackles and 10 hit-ups. The hardest-working and most impactful player on the Reds, maintained some semblance of respectability.

While Genia tried hard, White was the beneficiary of a dominant pack and exploited the space given to him well. A few good kicks and creative runs as well as some important cover work in defence.

A quiet performance, but enough to get over a battered Shipperley. Ran and tackled extremely hard at every opportunity.

Despite not kicking his best, was very important defensively. Textbook technique, allowing the Brumbies to come over the top and slow down midfield rucks.

Played well in defence alike his center partner. Was also able to add a few good runs, proving very difficult to bring down.

Without the ability to give the award to the entire Brumbies pack, Speight gets MOTW. Extremely explosive runner, breaking tackles and making metres every touch. Definitely a game-changer heading into the championship rounds

Relatively quiet game, but did enough with his booming kicking game and positional play, both important in the Brumbies field position advantage.