At the age of four, little Aelita Andre from Melbourne has become a fêted artist. Dubbed the ‘Toddler Picasso’, she has just held a solo show at the Agora Gallery in Chelsea, New York. Her style is called ‘abstract expressionism‘. 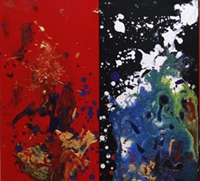 Is she an amazing artist or just a kid splashing paint around on a canvas? It doesn’t really matter what we think, does it, because there are people who love her work and they’re prepared to pay tens of thousands of dollars to secure one of her paintings.

That sounds like a great way to earn a living and I might give it a go. I’ve already created my first four pieces and I’m happy to show you another two today.

What’s all this got to do with rugby, you say? Well, the four pieces I’ve already created come from my article yesterday on how the Wallabies used their possession last weekend against the All Blacks.

By mapping all of the lateral movement of the ball during the Wallabies’ time in possession, I was looking for patterns that may emerge. I now realise that what I did was to (a) get a lot of people scratching their heads, and (b) create some arworks to rival those of Aelita Andre. See for yourself here and then send me your bids for the original pieces on canvas (no frame included).

Anyway, I’m back again today with another two pieces for you to consider. This time I’ve included the position of the Wallaby backrow players in comparison to the position of the breakdowns to see whether Elsom and Higginbotham were seagulling on the wing, as many people have alleged.

You can access the graphics by clicking on the icons below – one for the first half and one for the second half.

What do the graphics show, apart from my genius as an artist?

The main point is that there wasn’t as much seagulling as you might have expected. From 97 breakdowns where the Wallabies took the ball in, there are only 11 breakdowns where Rocky is any significant distance away from the action and none at all where Higgers is any significant distance away. On only three occasions did Rocky stay wide waiting for the ball to come to him, which it did twice. Those three occasions accounted for 6 breakdowns from the 97. Higgers didn’t stay wide waiting for the ball at all.

In my opinion both Rocky and Higgers were doing exactly what you want your ball-running back-rowers to do. They looked for opportunities to get themselves in the best position to run the ball into space and when the opportunities weren’t there they moved to the ball. Pocock largely played on the ball, which I think is what you want your number 7 to do.  McCalman played tighter than Rocky and Higgers but I don’t consider him a typical ball-running back-rower so would expect him to play tighter anyway.

If you’re still struggling to decipher these graphics or those from yesterday, don’t worry: I still haven’t got my mind fully around them either, and given the amount of time I had to put in to create them, you’ll probably not see anything like them again from me.