5 Things to watch out for in Dublin 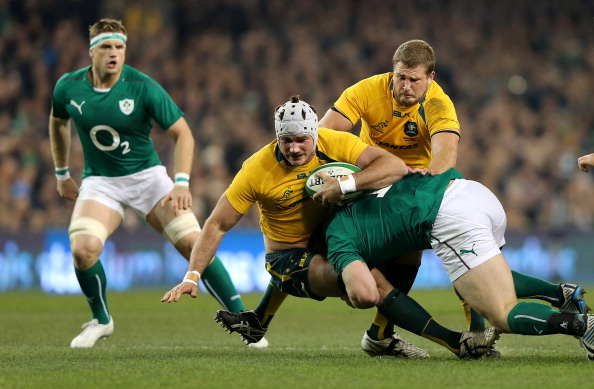 5 Things to watch out for in Dublin

The Wallabies suffered the first loss of the Michael Cheika era to the French last weekend, slipping to fourth on the IRB World Rankings. Ireland rose in the Wallabies place, but to the victor go the spoils: the winner of this match should end the day as the third ranked team in the world.

It will prove no easy feat. The Irish rugby team are the best they have ever been in the professional era. Guided by World Rugby Player of the Year candidate Jonathan Sexton at flyhalf, Ireland powered through their European neighbours to win the 6 Nations a penalty goal away from going undefeated. The Autumn Internationals have gone similarly well, with the Irish recording a 4th win from 8 against the Springboks (themselves coming off a landmark victory against New Zealand at home) and a big win against a Georgian team that is proving to be a giant of the second tier of Rugby nations.

Coached by a cool and calculating Joe Schmidt, the Kiwi who replaced Michael Cheika very successfully at Leinster in 2010 after the former’s 5 year stint rebuilding that club, the Irish have earned a reputation for being supremely well organised in attack and defence with an ultra reliable set piece. As most would recall, the Irish played a key role in derailing Australia’s Rugby World Cup campaign in 2011 as a Brian O’Driscoll led midfield shredded Robbie Deans’ attacking gameplan to bits. With that 15-6 defeat Australia finished second in Pool C, earning dates with South Africa and then New Zealand in the Finals which would prove fatal to championship ambitions.

Remember Hugh Cavill’s open letter to the Wallabies? I can tell you the Irish do…

The return voyage to Dublin saw the Wallabies earn their revenge to the tune of four tries to nil, as a hungry Green and Gold side capitalised on soft defence and the injury of Jonathan Sexton to strike back at the Irish 32-15. However, controversy surrounded the Wallabies preparations for that test – Ewen McKenzie’s infamous disciplining of the 15 Wallabies out drinking several days before the test set in motion a revolution within the team that would eventually claim his job.

From the last five test matches against the Irish, the Wallabies have won three, lost one, and tied one. The Irish maintain a paltry 29% winning percentage at home against the Wallabies. The average scoreline for matches in Ireland is 17-12 in the Wallabies favour.

Don’t forget to check in to Green and Gold Rugby bright and early tomorrow morning for my thoughts on the match live from Lansdowne Road, Ireland. If you want to catch a glimpse of what it’s like to be in the media box at one of the world’s most famous Rugby Stadiums, follow me on Twitter at @NicDarveniza – I’ll be taking photos documenting every step of the journalist’s experience.

With that bit of housekeeping cleared up, here are the five things that every Aussie Rugby fan needs to watch out for in the Dublin test.

VIDEO: A Speight of Reasons to be up at 3:30am aedt Sunday
Wallabies vs Ireland Scoring Summary