The GAGR Social Pages – What It Takes 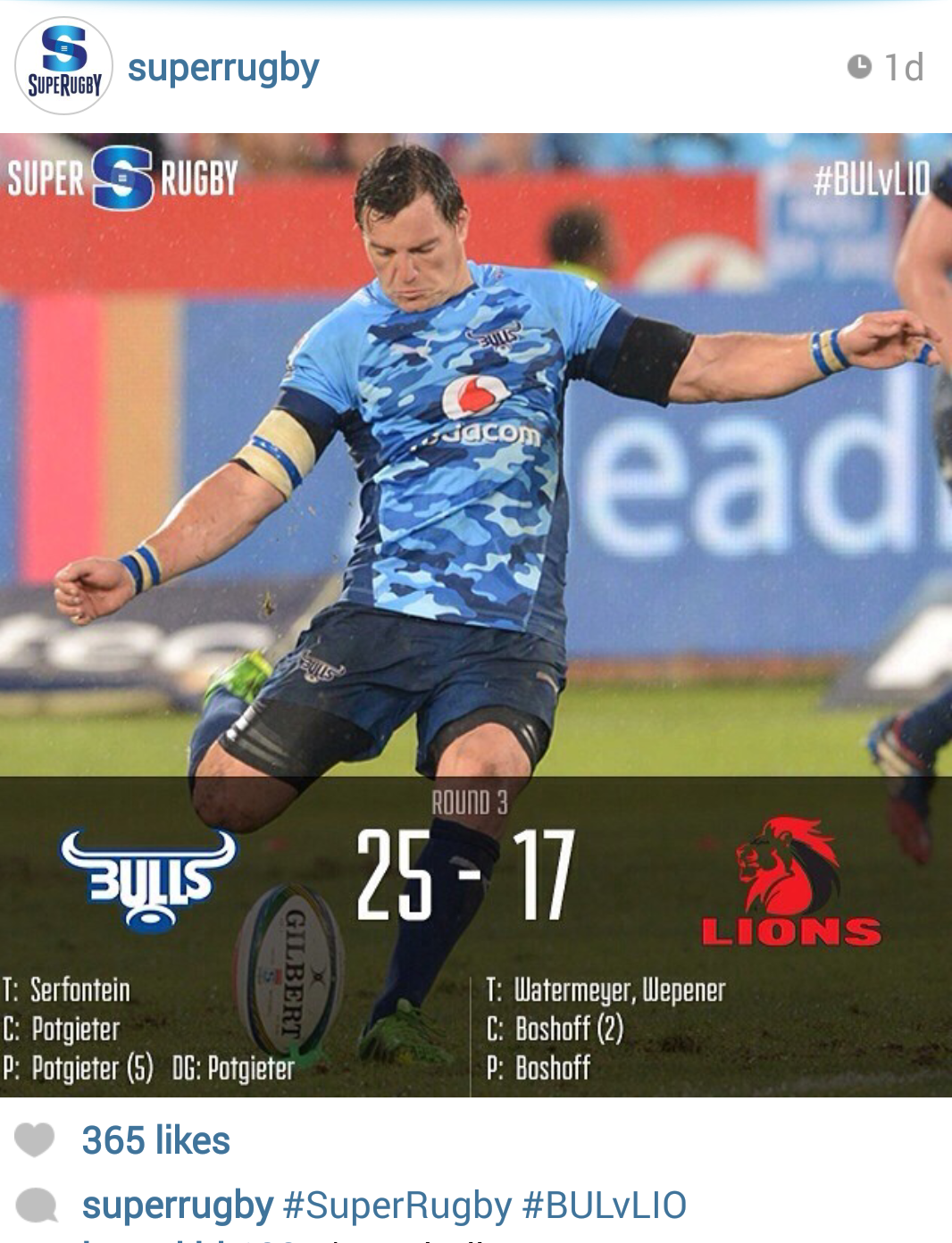 The GAGR Social Pages – What It Takes

In the last Social Pages before the Social Pages as you know it properly kicks off – the end of my trials, if you like – (and my posts become, blessedly, quicker to write!) I wanted to cover the official accounts, and start to look at some of the confusing relationships between accounts and why the Super Rugby Facebook Page ignores South Africa and New Zealand.  Just a warning- this has lots more words and fewer pictures than usual. 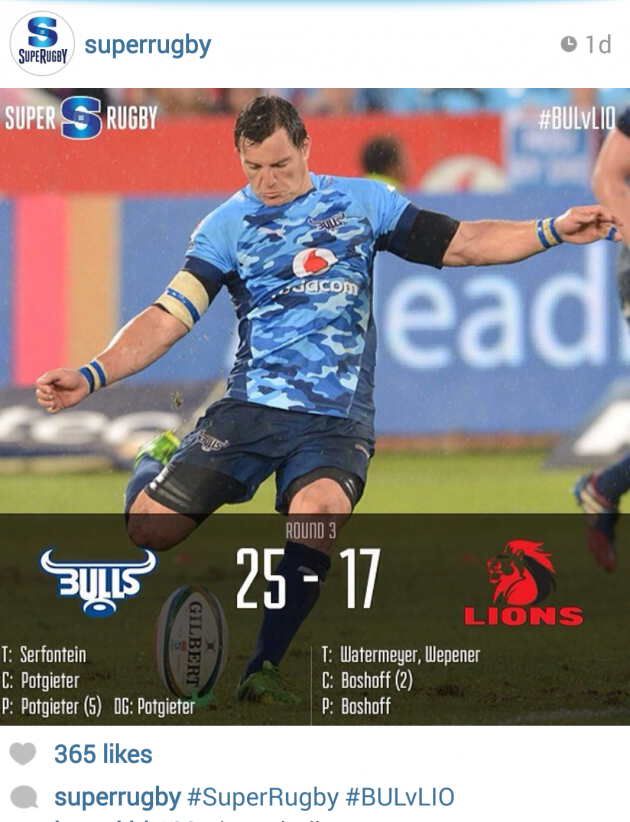 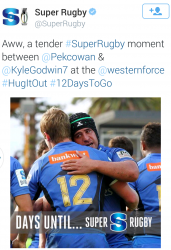 These are the official SANZAR-run Super Rugby accounts. If you like your Super social media to give you a wrap up on all the games across all the conferences, these are the accounts you need to follow.
The photos posted through these channels tend to focus on the emotions of the games; you can expect lots of photos of effort, passion, emotion and yes, international teams too. The channels are all really visual, and what I really like about this Twitter account is that you know what you’re getting: the headlines are clear – gallery, image, match report – and unlike those automated posts generated from Facebook, they seem written FOR Twitter. It’s nice to be able to make an informed choice about what you’re clicking on, or what you’re choosing to skip.

I also like the way the results are posted to Twitter, Instagram and Facebook so that I can wake up on a Sunday morning and immediately see the results from overnight presented in a really visually appealing way.

Yes that’s right, Super Fans, the Facebook address for this one is the same as the last one with a .au at the end. My understanding is that these addresses are run by the ARU, and having them is arguably an unusual approach to take. They’re good accounts – they reply to people on Twitter, they post regularly to Facebook – but their existence, especially the Facebook one, baffles me. You see, these are accounts of the ARU that present information from the Australian Super Rugby sides; they’re diluting two brands here, and I can’t see the benefit associated with doing so.

The first brand they’re diluting is the Super Rugby brand. Followers of this Facebook account would be completely unaware that it was different to the SANZAR-run page if they didn’t carefully read the information bit; if anything I’d personally like to see the page renamed to reflect its Australian focus. If you see anyone complaining about the lack of NZ and SA news, they’re following this page thinking it’s the SANZAR page.

The second brand they’re diluting is the ARU brand, and this is being done on quite a large scale.

Much of the content on the Qantas Wallabies Facebook page at this time of year is only modified slightly from the equivalent Super Rugby Au page (the filters on pics change a bit and the pics that go with the status updates are Wallaby pics instead). But apart from creating more work, why do we need a separate Super Rugby page? There is no transferability of audience – if, instead, the Wallabies Facebook page was used to focus on the Australian-eligible players throughout the Super Rugby season, it would not only attract fans of Australian Super Rugby teams to like the page, it would also mean that when the June-July Test window rolls around, they don’t have to set about re-engaging fans who had been spending their time on their other page.

I  am less bothered by the Twitter profile because the bio is clearer, and the ARU has a twitter account for most business areas.But the link to the website in the bio takes you to one of the least inspiring pages in rugby  – a news article posted on average every 8 days or so, and the most recent scrolling news on the landing page is of the launch event for Super Rugby. The “Official Home of Australian Super Rugby” could do with some upkeep, methinks.

The SANZAR-controlled accounts are run by only one man (@AlistairSANZAR on Twitter) and there is no doubt that this has contributed to the consistency of brand, style and content across all three social media channels. Aside from being sleep deprived for the duration of the Super Rugby season (and a few months either side) he is essentially able to define and operate the social media channels as he sees fit, and this can be a massive advantage.  But given that he posts news, links and content right the way from New Zealand to South Africa and all time zones in between, if you ever see him out and about, buy the poor bloke a coffee. He must only sleep an hour or two a night! (I’ve never met him but I assume I’ll be able to identify him from the bags under his eyes)

The ARU has arguably better resourcing (if there is more than one person with the keys to the twitter account, then they are better-resourced), a long-standing presence on social media, and therefore a much bigger brand footprint to work with. But with this comes some huge challenges to overcome and I don’t envy them for a second:

What would I do?

Sit down for a planning meeting to discuss what we, the ARU, want from  social media. I’m not talking buzzwords like “engagement” and “corporate partners” I’m talking – when people look at our social media and imagine me as a person, what do they envision? Am I someone they’d like to sit down with over a glass of the sponsor’s finest product? Am I the annoying bastard who shouts everyone Golds but asks for a Heineken when it’s someone else’s shout? Am I a wanker who extols the virtues of Chivas over Dimple? Do I have any idea what people see? Does it depend on what social media profile they’re looking at?

Most importantly am I happy with that image?  And if I’m not, how do I get there? 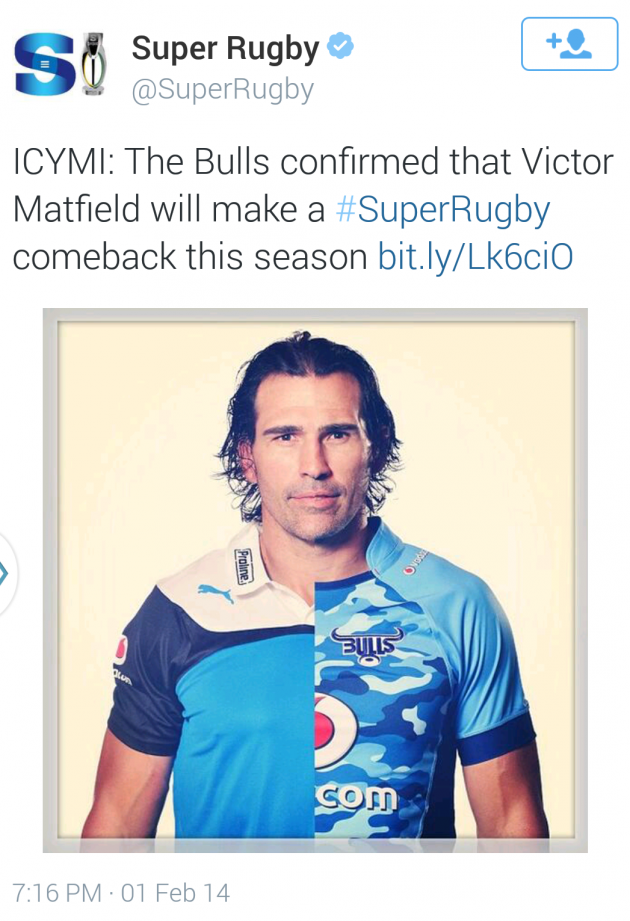