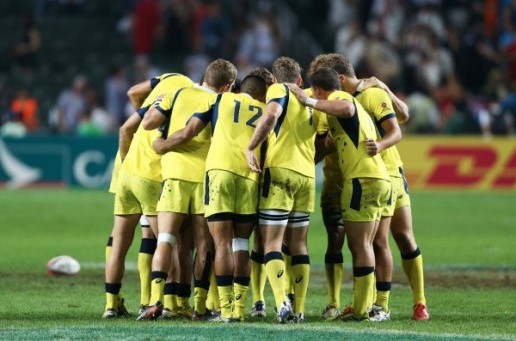 One team that has been grossly overlooked, in my eyes, is that of the best ever Australian Sevens team. I have very fond recollections of watching some of those early Hong Kong Sevens tournaments with the likes of Moon, the Ellas, Lynagh and Campo playing for Australia. But I, like many, have not been able to follow the last couple of decades so can make no assertion as to the quality of players in those times.

But who could? Well Michael O’Connor isn’t a bad place to start.

O’Connor is a legend of Australian Rugby. He debuted for the Wallabies at the end of 1979, less than a couple of years after having toured with the Australian Schoolboys teams alongside the likes of the Ella brothers, Michael Hawker, Tony Darcy and Wally Lewis. Before switching to league in 1983 he managed to squeeze in a couple of Hong Kong Sevens tournaments and has just finished a five and a half year tenure as coach of the Aussie sevens team.

Put that brief resume together and I reckon ‘Snoz’ is a perfect candidate to come up with a best ever team. Again, this is Michael’s best ever team and such a team will always create arguments, but have a read what the man has to say and make sure you leave your comments underneath the article. Who’d he miss, who’d he get right and do you agree with whom he picked as Australia’s best ever sevens player?

But first of all, what do you even start to look for in a sevens player? What elements are there in the traditional fifteens version of a player, that we need to look out for in a good sevens player?

“To start with it’s a misconception that if you’re a good sevens player, all you are is that you are incredibly fast or very fit. What I look for is someone without weaknesses in any part of their game. Team players are very important, players that will work for each other and stay connected. Experience in sevens, and an understanding of the nuances involved in the game, is vital”.

So that’s what Michael is basing a lot of his selection on. Given that, who do you think he picked? Read on below to find out in his on words.