Seven players to watch in Vegas 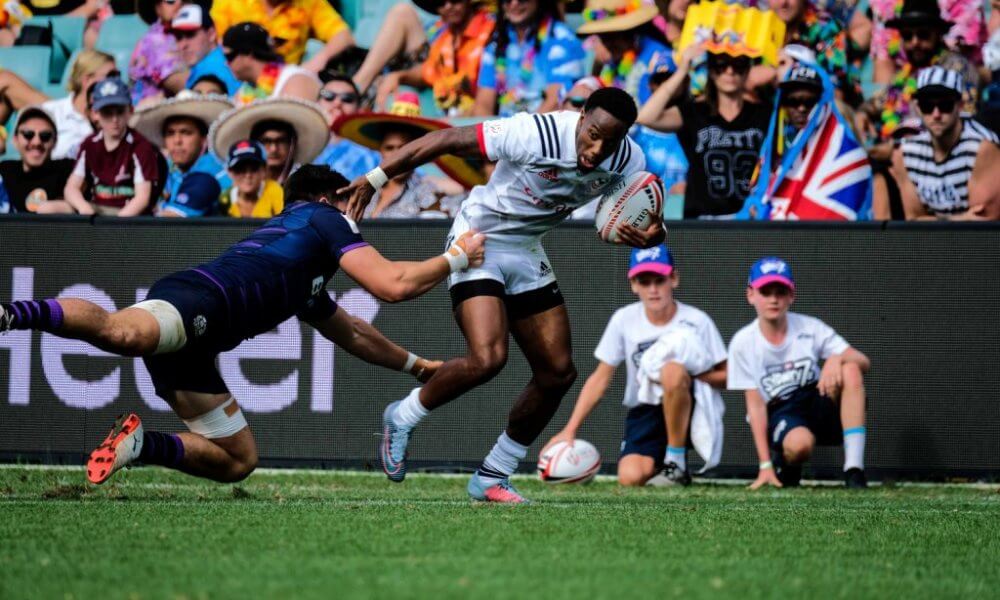 Seven players to watch in Vegas

With the Sevens returning to Vegas this weekend, here are seven exciting blokes to keep an eye out for.

With the loss of Perry Baker, Isles becomes a vital component of the USA side. Isles is essential to taking advantage of the space created by the USAs large forwards busting up the middle with his speed making him an obvious threat out wide. Isles has taken up the responsibility well registering the second most amount of tries for the tournament with 18, despite only recently getting back into the starting line up. With a relatively easy run up to the knockout stages there is a serious opportunity for Isles to help the US go deep into the competition once more.

Naduva is the leading try scorer in the series with 20 despite having only 8 line breaks, showing his support playing abilities. Naduva is an essential cog in the Fijian attack, with the 160cm mystro always popping up at the right moment to finish off the work of Tuwai and the Fijian’s big forward runners. Despite the Fijians being the all conquerors, they face a tough pool with the likes of Australia and Scotland before a quarter final match up with either England or South Africa most likely.

The South African speedster will be one to watch with the Bokka making a slow start to the World Series this year as they chase their first tournament win. With the loss of dominant players like Senatla and Kwagga Smith, the bulk of south Africa’s attack rests on Soyizwapi’s shoulders. So far he has handled the responsibility well with 16 tries, the 5th best in the series, but will need a big performance this weekend with South Africa given the tough task of England in the pool stages.

Never show @Blitzboks‘ Siviwe Soyizwapi the outside. He’s got too much gas!

Despite having only 7 tries this series Barrett is heavily involved in much of the USA attack with his busting runs up the middle regularly creating the space for the likes of Isles and Tomasin. However, with the US unearthing a number of fresh faces in the forward pack, Barrett hasn’t quite reached the heights of previous years, but it is in Vegas were he has produced his most memorable performances. In the corresponding fixture last year, Barrett produced a dominant display and will be looking for more of the same as the US search their first tournament win of the series.

Malouf’s dominant form has resulted in him being named as vice captain for this weekend. A pleasant reward for Australia’s most improved player who has become a vital component for the Aussies with and without the ball. Malouf had a break out performance in Sydney scoring the match winning try against South Africa, while pulling off a number of try saving tackles to keep the Aussies in the game against the likes of Fiji, France and South Africa.

IT DOESN’T GET BETTER THAN THIS.

Time up on the clock. Try needed to qualify for Cup QFs on home soil.

Braid has become one of the most damaging players on the series, with the Canadian displaying a very large array of skills in attack. Braid leads the competition in carries with 88, while also boasts 12 tries to his names. Impressive numbers for someone playing in a lower ranked side. Moreover, with the Canadians being put in the easiest of pools with the only side of substance being the Kiwis, there is a great opportunity for Braid to lead his side into the Cup stages of the knockout.

Canada’s Connor Braid coming STRAIGHT into your living room Braid ices the game, as Canada takes this one by a score of 29-21 over Papua New Guinea CANADA is now off to the round of 16 to take on Argentina @10:25 ET pic.twitter.com/mkHCT5aBDB — CBC Olympics (@CBCOlympics) July 20, 2018

Sione Molia workman like performances has led the Kiwi to the top of the DHL performance tracker, with his consistent performances regularly underlying New Zealand’s success. With the most tackles on the series with 53, Molia is the linchpin of the Kiwis defence allowing the likes of Knewstubb and Ware to focus on attack. Furthermore, with 11 linebreaks and 75 carries Molia plays a crucial role in putting New Zealand in positions to attack. Molia is one of the hardest working players on the series and will be an interesting player to watch in Vegas.