Scrum Analysis: Working As A Pack 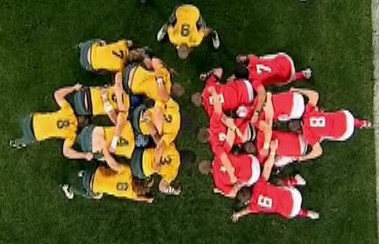 Scrum Analysis: Working As A Pack

My explanation of technique is by necessity fairly broad and if I make it sound simple, it isn’t because no matter how well you understand the technique and the science of forces, rugby players aren’t robots who do exactly what you expect and this is where the dark arts comes into it.  No matter how many articles I, or anyone else writes there is no way to explain what to do if something unexpected happens in a scrum – that you can only really understand by packing hundreds and more likely thousands of scrums.  I should also point out that there are variations to the techniques I outline dependent on what you’re trying to achieve in the scrum and whether it’s your feed or not.

You’ll often hear of the importance of the whole pack working together – I often say it myself.  However, whilst the pack does work together there are some smaller groups whose role within the pack is even more important. Essentially I look at the scrum as two pods of three (a prop, a lock and a flanker on each side of the scrum). Those two pods are brought together at the front of the scrum by the hooker and at the back by the number eight.

This is particularly so on your own feed when the hooker’s main focus is on raking the ball and therefore they initially have no pushing role – well that’s how it worked when the halfbacks had to feed the ball in the centre of the scrum.  These days the ball is often fed into the second row and there is no need for the hooker to rake the ball back.  I hope that changes so that the scrum becomes a real contest again.

In this video I show once again why the role of the flanker in these pods of three is so important and why the number eight doesn’t have as much of a role pushing in the scrum as you may imagine.

The availability of overhead footage opens up a whole new perspective on scrummaging. If you want to see this perspective for your own team, even at a club rugby level, attach a web camera to a lightweight pole using a number of USB leads joined together and plug into your laptop, hold the pole over a scrum in practice and then record – you’ll be amazed what you can see.

Hopefully, this series of videos has provided a little more insight into what’s going on with scrums.  Whilst most of us bemoan re-set scrums and the lost time taken as a result, the scrum is a real test of skill and strength and any team that has a strong scrum will have a really good platform to control the game.