Review: Rebels v. Chiefs – Not Bad. Not Bad At All 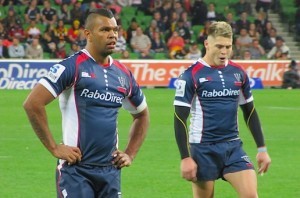 Review: Rebels v. Chiefs – Not Bad. Not Bad At All

In one of the most entertaining matches of 2013, the Chiefs escaped AAMI Park with a 39-33 win.

The Melbourne Rebels lost the match, but started to win back a city.

Seventy minutes into the game, something changed at AAMI Park. The Rebels were throwing everything they had at the defending champions, refusing to accept that they were beaten. The crowd fired up, cheering their team to the unlikeliest of victories. The famed atmosphere of the ‘Stockade’, dormant as the Rebels struggled through the opening half of the season, had returned with force.

This was not the result they wanted, but these were the Melbourne Rebels they were promised, and boy, did they approve. 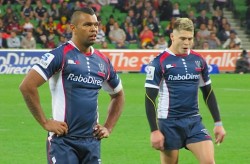 It was a devastating start for the Rebels, The Chiefs take the kick-off, the Rebels fumbled and the Chiefs sent it wide to a killer overlap and the waiting hands of Gareth Anscombe. The conversion missed, it was 5-0 after 1 minute.

The Chiefs kept the foot to the throat, regaining the ball and moving the line up quickly, trapping the Rebels offside. They went for the line with the kick, smelling blood. The Rebels defence capitulated and Bundee Aki weaved his way through what little remained to score underneath the posts. Anscombe converted, 12-0 after 10.

The Rebels needed a spark and captain Scott Higginbotham delivered, breaking from a lineout in the Rebels’ half and finding Tom English. The winger sent an offload back to Higginbotham, who took a tackle and reached over the line. The referee sent the English pass up to the TMO, and though the pass looked to be creeping forward, awarded the try to the Rebels. James O’Connor converted and it was 12-7 after 15.

The game started to settle down, but the Rebels still struggled from issues with defence. The Rebels were hitting the ball up through the forwards before the Chiefs turned it over. Brendon Leonard sent it wide and the Chiefs had the overlap again, the ball ending with Gareth Anscombe for his second. The kick was good, 19-7 after 22.

Five minutes later, Anscombe had his hat-trick, after a break from Tim Nanai-Williams found him waiting in the opposite corner to secure the bonus point. The kick missed, the Chiefs were dominating at 24-7 after 26.

The Rebels weren’t playing badly, but when James O’Connor received the ball from a scrum, only to falcon (verb) Mitch Inman, you got the feeling it wasn’t their night. They refused to give up, though. James O’Connor passed wide to Tom English, centred back to Vuna, who sent it back out wide to Hugh Pyle, who reached over the line. The kick was good, 24-14 to close out the half.

The second half began with the Chiefs camping out in their attacking half, with the Rebels’ scrum getting monstered by the visitors’ attacking intensity. After more scrum resets than would seem sensible, Matt Vant Leven took the ball from the back and popped to Sam Cane, the flanker in the perfect position to touch down. Anscombe converted to make it 31-14 after 51.

Kurtley Beale came on to warm applause, but his start was…inauspicious, skying a restart out on the full. He picked himself up and gave the Rebels the lift they needed, teaming with best bred James O’Connor to spark the Stockade. They got the ball close, but it was Beale’s connection with Hugh Pyle that would pay dividends, the lock reaching over for a brace. O’Connor converted to take the defecit back to 10, 31-21 after 65.

Gareth Anscombe slotted a penalty soon after to put the score to 34-21, but the Rebels were rising. O’Connor teamed again with Beale, pulling off a blind pass on the inside shoulder. Beale shimmied his way through what remained of the Chiefs’ defensive line, went back to O’Connor who sent it wide to a massive Rebel overlap, ending with Nick Phipps to score the try. The TMO had a look at O’Connor’s pass that started the run, and found it flat. O’Connor missed, 34-26 after 70.

The crowd were lifting, the Rebels were running, but again, you got the feeling it wasn’t their night. James O’Connor received the ball and tried to clear, but Brodie ‘Punchy’ Retallick charged down the kick and won the 5-metre race to touch the ball down. The conversion missed, 39-26 after 71.

These Rebels, pretty much outclassed for the entire game, just would not die. It was again Beale who brought the house to its feet, treating the Chiefs’ line with utter contempt as he flew over the line for a try. O’Connor converted for 39-33 after 76.

Anscombe would have a fourth try denied by the TMO, and the Rebels ran themselves into the ground trying to steal the unlikeliest of wins. History will say they ran out of time, but when the whistle blew, the crowd treated them as if they pulled it off.

Sometime soon, maybe they will.

The TMO‘s constant intervention into the game proved a buzz-kill all around. A great game was put on pause as the crowd had the joy of watching a flat pass constantly replayed. Referees need to back themselves, although maybe not this one as he had a pretty rough game.

Hugh Pyle. His steady hand produced a try out of nowhere, then did it again later in the game. He is lifting just in time for June. ARE YOU WATCHING, ROBBIE?

Kurtley Beale. Apart from shanking his first kick-off…good Lord. His interplay with James O’Connor, who had been ordinary before Beale’s entry, would be nothing short of frightening to Warren Gatland and his squad.

Five Lions to be feared
AIC Round 2: SEC v SPC and other scores