Rebels stun Crusaders in upset of the year 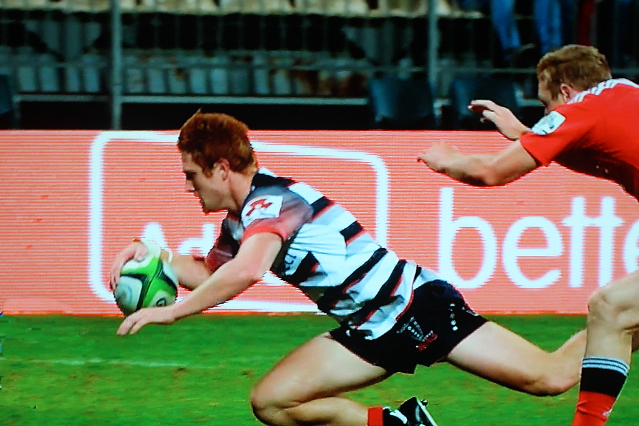 Rebels stun Crusaders in upset of the year

Written off by most as spoon contenders, the Rebels stamped their claim on season 2015, registering their maiden overseas victory against the always-strong Crusaders.

Canny pundits saw the slow-starting Crusaders as a ripe target for the underdogs and the Rebels delivered on their preseason promise. Memories of 2014’s unfulfilled start still linger, but your slightly refreshed correspondent is feeding the flames of optimism after a solid team performance.

The first half was balanced, with both teams matching each other in general play. Rebel tyro Nic Stirzaker grabbed himself an early yellow with an overzealous invitation for Sir Richie GOAT to remove himself from the wrong side of the ruck. Leopards don’t change their spots. Stirzaker must curb that side of his game, or at least disguise his boot work with more subtlety.

An early penalty to Carter saw the Crusaders open the scoring.

Pre-match speculation touched on Tony McGahan’s selection of a five man backrow. The lock pairing of Timani and Jones, both of whom are at home on the flank, gave the Rebels mobility that paid dividends.

A scrum penalty saw Harris bring the Rebels to 3-3.

The Rebels forwards built 19 phases before Timani crashed over for the opening try. Previous Rebels’ outfits would have lost patience and spilled the ball, but the composure was evident and a much welcomed change. Harris converted for a 3-10 lead.

Crusaders were quick to reply with a try to Ben Funnell, converted by Carter. 10-10.

Crusaders’ scrum half Mitch Drummond earned himself a yellow late in the first half. Gaps started to appear for the Rebels and a period of sustained pressure saw Harris kick a penalty after the buzzer to give the visitors a 10-13 lead.

The second half was an arm wrestle. Both sides struggled to build pressure, with referee Briant particularly strict in his interpretations. Most of his calls were correct, albeit with a hair trigger.

The Crusaders pack pressured the Rebels at the set piece. While many Rebels scrums were salvaged, they were under stress at all times. Leafa’s lineout throwing was shaky and resulted in a number of turnovers.

Wallaby sensation Sean McMahon was everywhere, but an overenthusiastic tackle saw the TMO recommended a yellow card. Fans may rightly argue the severity of the punishment, but the tackle landed his opponent with his hips above his shoulders. Slade missed the ensuing kick, but the loss of an influential forward was a potential tipping point in the match.

Scott Higginbotham – played well but had some scratching their heads

Higginbotham’s decisions as captain have sometimes left this writer scratching his head. Down a forward and with a short arm penalty, the Rebels’ skipper chose to pack a scrum. The Crusaders sniffed blood and thoroughly dismembered the Victorians. A few phases later Carter put in a questionable grubber which was snaffled by Stirzaker who ran away for the try. Harris converted, Rebels ahead 10-20.

A fast Crusaders’ reply down the left wing saw a desperate tackle from Hegarty knock the ball into touch. This opened a sustained period of pressure on the Rebels try line. While the Rebels defence was strong through the night, their work while under significant stress from the 65th minute, both in general play and in the scrum, was a highlight. After many phases the Rebels cleared their lines, with the experienced Luke Burgess directing play.

In the end the Rebels were in possession for the final few minutes and ran the clock down; another lump of fuel for this optimist’s fire. Their glee in securing the first victory overseas was evident. Chapeau, Melbourne!

A huge victory for the Rebels and a vindication of their on- and off-field recruiting. They go into their first home game against the Waratahs full of confidence and will gladly assume the underdog tag against the reigning champs.

The Crusaders put together some great phases and dominated the set piece. At full strength they will be a team to beat, and their slow start to the season should turn around.

McMahon’s yellow card could (should) have spelled doom for the Rebels.Would this help the Kiwis pull yet another win out their back sides?

No – the turnover from Carter’s midfield grubber saw the gates snap shut for the home team.

A review of the match in the warm light of victory and away from a post-work pub will offer a clearer view of the MOTM, but the impact of Mike Harris as stand in flyhalf and goal-kicking Dead-eye Dick is a blessed inclusion.

May his boot swing true!

McMahon was everywhere and forced a great turnover on the runaway Fruean. He needs to curb his aggression. The guy’s built like a cage fighter and doesn’t need to assert himself outside the laws.

Harris was solid and his goal kicking is money in the bank.