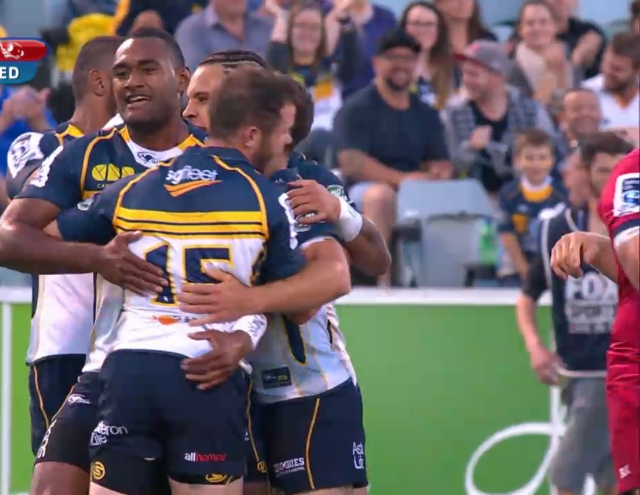 The Brumbies have opened their 2015 season in strong fashion with a dominant 47-3 win over the Queensland Reds in front of 13,570 fans in Canberra.

The win was built on the back off keeping the Reds in their own half and denying the Reds big centre pairing few chances to use the ball whilst using the ball effectively to score six tries of their own.

The Reds were their own worst enemy, with discipline hurting them throughout the game with James Horwill having a tough battle with referee Angus Gardner all night that ended up with him receiving two yellow cards.

The Reds went into the game without a number of regular starters and gave the keys to the backline to new recruit Karmichael Hunt who looked a little nervy with his kick off to start the game that barely went above head height and just over the 10 metre line.

The Brumbies opened the scoring after just five minutes with the ‘Prince of Queanbeyan’ Robbie Coleman on the end of a quick hands move after the had blown two earlier chances from knock ons.

Lealiifano landed his first penalty goal of the night before the Reds thought they had hit back through Samu Kerevi off a back line move but the try was called back due to an obstruction from Chris Feauai-Sautia in the lead up.

The Brumbies driving maul was putting on an excellent display and were unlucky to score after a 13 man maul saw them come up just short with a knock on right on the line denying them on that occasion.

Lealiifano added two more penalty goals in quick succession before the Reds finally got on the board with 40 metre penalty goal from Karmichael Hunt.

Just on half time, the Brumbies extended their lead to 21-3 with a try in the left corner to Joe Tomane after another good run from Robbie Coleman. The try was set up from another penalty kick to the corner and the Brumbies forwards rolled to within metres of the line before Tomane dived over.

In the second half, the home side kept the foot on the pedal to put the Reds out of the game.

James Horwill received his first yellow card of the night for repeated infringements and the Brumbies took advantage of the extra man and scored 14 points in that period.

Almost immediately, Matt Toomua found the try line and was converted by Lealiifano, who seemed to have found his kicking boots after being well below his best in 2014 with the boot.

Soon after, Nic White bagged the bonus point try for the Brumbies after a sneaky kick and regathered it to put it well out of reach for the Reds.

The Reds just couldn’t get any field position and barely had any chances to use the ball in the Brumbies half and were pinned down in their own half.

The Brumbies still had tries in them and Tevita Kuridrani added his name to the try scorers list after a strong run from close range.

Things went from bad to worse for the Reds, with James Horwill shown a second yellow card from Angus Gardner, this time for incorrect entry to a maul, and the Brumbies showed no mercy with James Dargaville diving over on his debut to round out the scoring at 47-3.

The Brumbies head across the ditch next week to take on the Chiefs in New Plymouth whilst the Reds need to regroup before they play the Western Force.

Tomane’s try on half time gave the Brumbies the confidence to go on with the game, which they ultimately did.

A few to choose from, but Matt Toomua lead the Brumbies Wallabies laden backline well

The Brumbies had 12 Wallabies starting and they all played a part in the win whilst the Reds contingent didn’t have a great night, with James Slipper hooked just after half time a telling substitution.

Will Genia tried his best in a well beaten team but couldn’t get anything going with the inexperienced players outside him.

Horwill will appear before the judiciary over the weekend following his 2 yellows/red card.

PREVIEW: WARATAHS VS FORCE
Rebels stun Crusaders in upset of the year