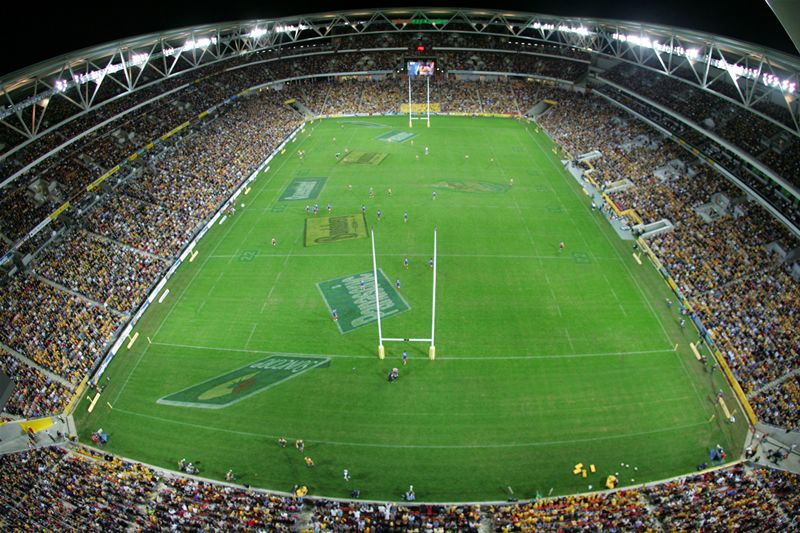 It’s amazing how much has changed since then.

Wikipedia was five months old. Christopher Skase was alive. Ansett was still around, and if you were flying to any of the Tests, the pilot would probably let you have a look in the cockpit if you asked nicely enough.

It’s incredible how much the world changes in front of you, so quickly that you hardly notice it. The most insignificant of events can end up challenging the most deep-seated of beliefs in no time at all.

I will confess – since I began looking forward to the Lions Tour, I never rated the Wallabies much of a chance. I wasn’t sure we had the squad, the management or the game plan to succeed against the might of the combined Home Nations. I believed in our ability to rise to a challenge and give the tourists a contest, but I, like many I’m sure, could not shake the feeling that the Wallabies were heading towards a 3-0 series defeat.

As the Wallabies have not played together in 2013, there was very little I could grasp to allay those fears, and as the Lions overcame the Reds and Waratahs, and treated the Force and Country sides with contempt, the fear that a contest was all we could hope for solidified.

I flew up to Canberra on Tuesday for a game of rugby. The next day, everything changed.

Jake White has found the idol – but can it be delivered to the Wallabies?

The Brumbies’ 14-12 victory against the Lions was one of the most extraordinary games of rugby I have had the privilege of attending. Not for its quality, its historical significance, nor even the simple fact that it was closely contested. It was extraordinary, in my opinion, because it was an uncovering and exploitation of a opponent’s weaknesses, the likes of which I have never seen. The Brumbies didn’t just beat the Lions, they exposed them.

Through their victory, the Brumbies have given the Wallabies a framework in how to defeat the Lions. A brutal defence that refuses to run the ball in its own half, kicks for position and runs maniacally to suffocate the attack, stopping the Lions from rolling the ball through the forwards, and playing the running rugby that they favour. An attack that is patient but quick when an opportunity presents, that knows the Lions favour the centre of the ground and can trap them there with a fast attack out wide.

Warren Gatland said of the Brumbies game; “…they didn’t really play any rugby against us; they kicked the ball and competed at the breakdown.”

And therein lies the secret uncovered on Tuesday: If you cannot beat the Lions playing rugby, don’t play rugby. Suffocate, pressure, grind, and force a reaction out of the opposition.

This was Jake White’s gift to Australian rugby. Or, a subtle submission of his curriculum vitae. Either way, it should be accepted with open arms.

The plan is now in place, all we need is the squad to execute it.

Wallabies coach Robbie Deans has copped his fair share of criticism over his tenure, but, intentionally or otherwise, he has picked for this game a squad that could well pull off a memorable victory.

A look at the Wallabies backline shows how the national side could easily emulate the feats of the Brumbies. High and defensive on the inside, fast and attacking on the wings. James O’Connor has his detractors at fly half, but his tendency to play close to the attacking line and deliver the ball quickly should render him perfect for Saturday night’s role. Christian Leali’ifano and Adam Ashley-Cooper are both talented footballers who can clear the ball and time a pass or run, and Berrick Barnes can kick for position all day.

On the wings, we have two world-class attacking options in Digby Ioane and Israel Folau. If the inside backs can time the pass well enough, these two players are hard to match for raw speed off the line. They will be our major scoring options on Saturday night, but will need to impose themselves on the game quickly in case the game slows or the conditions deteriorate, and the opportunities dry up, as they did to an extent in Tuesday’s match.

The great thing about tour matches like the Brumbies one, is that there’s little to lose – for the hosts especially. It’s just an exhibition match. You can take liberties at certain points in a game, and the worst thing that can happen is that it doesn’t come off. The Wallabies don’t have that luxury in the Test series. They will be held to account for every opportunity they concede to the Lions.

Discipline is, therefore, paramount to the Wallabies’ chances. They can’t hold up the breakdown like the Brumbies did, because the first-string Lions pack will monster them, and trap them into conceding penalties. The same goes for the scrums – they can be conceded, but they need to stay legal. Any penalty conceded within fifty metres of the Lions’ goal will be taken by Leigh Halfpenny, and he will not miss.

The Brumbies solved this problem by refusing to play the ball in their own half. It will be interesting to see if the Wallabies go down the same route.

This match kicks off at Suncorp Stadium, Brisbane, at 8.00pm.

These teams have met twenty times, the Lions winning on fifteen occasions, the Wallabies five.

The last time they met was on July 15, 2001, with the Wallabies defeating the Lions 29-23 at Stadium Australia.

These teams have never met at the redeveloped Suncorp Stadium, but have played on the Lang Park site once, the Lions winning 31-0 during the 1966 Tour of Australia and New Zealand. They have met seven times in Brisbane, the Lions have won all seven.

The game will be telecast live on Network Ten and FOX Sports 2HD.

The referee for the match is Chris Pollock.

This is the battle to watch for in the first Test. Adam Ashley-Cooper has the distinction of being one of the few Wallabies named that have played consistent top-level rugby in 2013. He has been in great form for the Waratahs and his selection was one of the few locks in the lead-up to the Lions Tour. He has an impressive defensive skill set, that he will have to fully utilise against one of the most talented players in world rugby.

AAC – having a Super year

Brian O’Driscoll has been in sparking form so far on tour, scoring two tries against the Force and one against Country. When the Lions’ attack at its best, O’Driscoll is Exhibit A. All three of his tries have come through finding a gap in the centre channel, left by his opposing number. The Irish legend is the Lions’ most potent try-scoring threat, and if he can get the better of Ashley-Cooper’s defensive efforts, the Lions’ task will become considerably easier.

Ashley-Cooper will need to mark O’Driscoll tightly, and force him to attempt his runs on the wing, where, if the tour games are any indication, he will struggle to find support. If Ashley-Cooper can neutralise O’Driscoll as a threat, the Lions will have to resort to kicking to get points on the board. Not a death sentence to their hopes, by any means, but a handicap they would not want to concede to Australia’s outside backs.

I have been thinking about what name I was going to write at the end of this preview since I stepped out of Canberra Stadium on Tuesday. It has changed countless times. I was so sure last week that the Lions were going to take this match out. Now, it’s game on.

There are a lot of variables. The Wallabies have not played a lot of rugby together. A lot of players have been picked on reputation rather than form. Apart from a hiccup on Tuesday, the Lions have run rampant over any opposition put in front of them.

And yet, I can’t shake the feeling that the Wallabies could actually do it.

My head still says Lions, but I’ve got 12 years to use that.

Who wins in Brisbane? What match-ups will you be keeping an eye on? How excited are you?