The Melbourne Rising opened their 2015 Buildcorp NRC season with a hard fought 39-31 victory over Queensland Country on the Gold Coast today. In doing so the Rising become the first team of successfully defend the Horan-Little Shield.

The highly entertaining match featured 11 tries across both teams and, whilst missing the intensity of the Grand Final replay between Brisbane City and Perth Spirit on Thursday night, put a cap on an extremely high quality first round of rugby in this NRC competition.

An enthusiastic crowd of Gold Coasters were out at Bond University in the hope that QLD Country would spring an upset on the 2014 Minor Premiers, particularly after their young openside flanker, Conor Mitchell, streaked away for a try after five minutes, after cleaning up a loose Rising pass.

However with Rising scrumhalf, Ben Meehan,  skirting over for a smart try from the base of a ruck, and flyhalf Jack Debreczeni converting, the visitors took the lead for the first time in the match.

The old man Radike Samo was very prominent early on, making some very strong runs – one in particular would lead to Rising prop Tim Metcher having to be stretchered from the field, a event that would lead to Country dominating the scrum for the rest of the match. 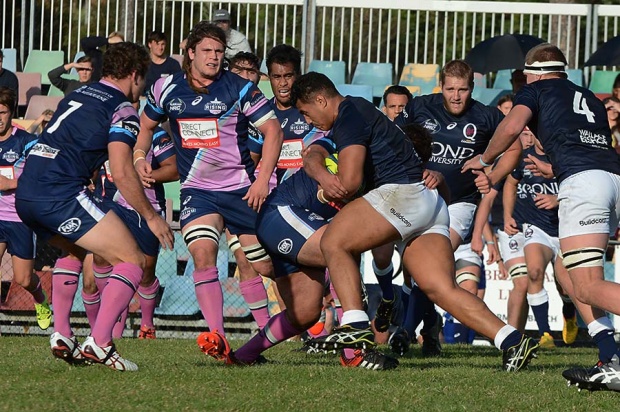 Whilst a strong try to Country prop, Sef Fa’agase, put the home team in front again some soft defense on former Gold Coast Breaker, Lloyd Johansson allowed the Rising to gain momentum and outside centre Leo Taliu would barge over for his first Rising try.

Aimless midfield kicking was becoming a worrying trend for Country and not long after the Taliu try, another off-target bomb saw the Rising running with great width and with Debreczeni showing some classy distribution, captain Scott Fugistaller was soon over for another five pointer to give his team a 24-13 lead.

A potential match turner would soon come with Meehan given a Yellow Card for a professional foul as Country pressured the Rising line. Tom Pincus looked like he would score soon after, however the pass from JJ Taulagi was ruled forward. JJT would do it on his own soon after, forcing his way over from close the line after a series of strong forward pick and drives. The try would give Country some hope as they went to half time 18-24 down.

Hope would bloom soon after the resumption of play with Fa’agase scoring his second try – this one a 40 metre effort (although I am sure it will be 100m by Monday morning) having backed up some nice play between Sam Green and Taulagi.

Once again the momentum was blown with a quick response by the Rising as that man Meehan redeemed himself for his earlier foul with a second try and the Rising were back in front 29-26 just seven minutes into the second half.

Hooker Pat Leafa followed up with a try running onto a delightful  Debreczeni pass, however Country hit back through some rookies with a strong try to replacement prop Reuben Leilua after a great run by winger Izaia Perese and a big hit up by Milton Sikuea.  The Rising were still ahead, 34-31, but the game was still anyone’s with the key being about holding possession.

With just 15 minutes to go, Rising fullback Jonah Placid was sin binned for playing silly buggers with Taulagi and Country had their chance to grab the lead. The Rising however were able to repel their attack and a scintillating try by winger Dom Shipperley with ten minutes turned the tide back Melbourne’s way.

The last ten minutes was Country trying their best to get across the line to even up the scores, however the Rising worked tirelessly and strong defense and excellent work on the ball was enough to secure them the game. 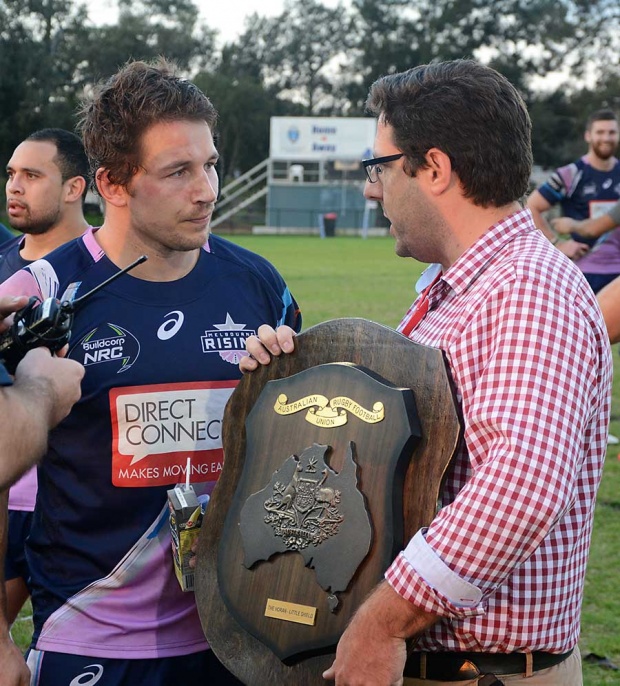 The win means the Rising have defended the first ever Horan-Little Shield challenge and will now go on and defend it again on Saturday afternoon in Melbourne. I was privileged enough to be able to present the Shield to Rising captain Fugistaller after the game and took the time to impress upon him the story behind its creation and the GAGR community’s wish for it to be treated with respect and significance in order to built it’s tradition.

In wonderful recognition by the ARU, a Green and Gold Rugby representative will continue to present the Shield after every Challenge match for the rest of the season, on behalf of the Australian Rugby community.

It was very much a game of ‘we score, you score’ for most of the match, with anytime one team seemed to get the edge, the opposition hitting back. In the end it was a wonderful try by Dom Shipperley with ten minutes to go that sealed the deal for the Rising and seemed to put an end to any Country revival.

It was a closely run thing between the Rising halves, backrow and the Country front row, particularly two try hero Sef Fa’agase. Whilst Debreczeni controlled the game delightfully and displayed a full variety of kicks, it was his scrumhalf Ben Meehan who provided the spark for his team and looked the most dangerous man on the field.

With the Rising seemingly chock full of contracted players, it was in the Country team that the ‘unheralded’ players were most noticeable. Two young University of Queensland forwards really caught the eye of this reviewer. Openside flanker Conor Mitchell was prominent across the park, scored a special try and secured a number of turnovers at crucial times. Lock forward Phil Potgieter (Phillipus Rudolph Potgieter, apparently) proved a hard working and effective man in the midst of the Country pack. Having missed this year’s Australian Under 20s team through injury, the NRC will provide him a great opportunity to showcase his abilities.