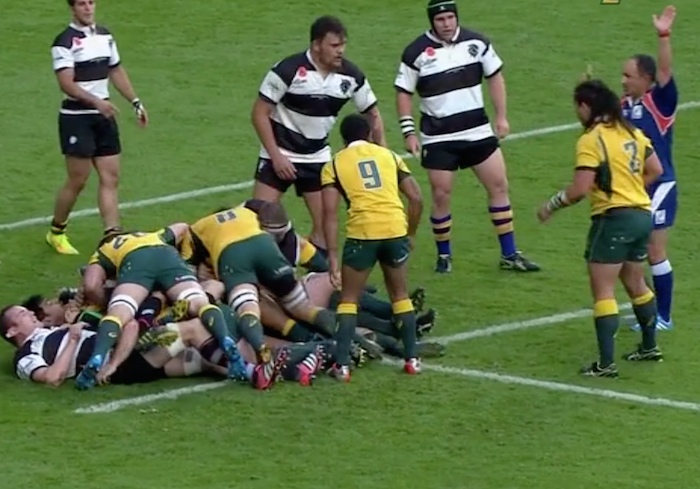 The first match for the Michael Cheika Wallabies – even though it wasn’t quite what he would have wanted on the scoreboard – showed a lot. Indeed, the last game under McKenzie showed a lot. There were some real positives and plenty that appear to be a hallmark of Cheika coached teams.

I thought that we had a massive change in the work rate of some of the forwards – its the best I’ve seen Horwill play for years. We continued with much better ball carry, with Sam Carter continuing to be much improved. It looked to me everyone knew that unless they produced the goods in terms of work rate they weren’t going to get a start next week.

The choice of second row is tricky – it looks like Cheika wants two of Horwill, Simmons and Carter starting and Skelton on the bench. My problem with Horwill and Simmons on the field at the same time is the number of penalties they give away.

I can add in Scott Higgenbotham for praise in his time on the field with his contribution and carries in close. We all know what talent he’s got and if he can keep this up we may see the best of him yet.

In what must be one of the best Wallaby debuts of all time, Sean McMahon was outstanding. He has the pace, acceleration and power of Hooper, as well as the work rate – I’d have him on the bench. He was terrific and I believe he won a couple of line outs to boot. With his power from the ground, one decent lifter will make him an option.

When Nic White and Bernard Foley came on there was a massive lift in our attacking threat. This came from swift and accurate ball distribution straight off the ground (even though Greg Martin was pleased with Genia’s running – it hampered our attack). Foley was very flat, threatening the close-in defence. This made a huge difference in the shape of our game and created our period of real dominance.

In terms of other individual performances, Toomua’s work rate was outstanding. I don’t think he’s quite good enough to be a starting player in a World Cup winning team, but that may come. He certainly showed he wasn’t in the slightest bit hampered by any descent bouts of concussion. Rob Horne was excellent and has to get a start in the test team.

Let me say it for the 400th time – we have to have Kuridrani at inside centre. If we have Foley, Kuridrani and Ashley-Cooper in the inside channels we will seriously threaten and make space for our back three.

Speight wasn’t seen very much but it was his first game for a while and Checka might want to take a punt with him. With Speight and Horne on the wings you could have the centre pairing I’d advise. You need good defenders on the wing because the Welsh wingers are a threat.

We need to do something about increasing Folau’s speed over a distance. His acceleration and agility are great, but anything over 30m and he gets pulled in. This can be worked on, but not on tour (I certainly would’t be dropping him).

What would I have said to the team? Fantastic, but you don’t have to score every time you get the ball. You have to question the defence and keep the play going. It doesn’t have to keep going with the pass, but with the ball recycled off the deck.

All in all that was a pretty good start to the tour but Nathan Grey has a lot of work to do in the next week. The Barbarians certainly threatened with their attack, but so will Wales.

PS – Can any of G&GR commenters come up with a solution for how we get Jaco Peyper removed from the international panel of referees? He totally ignored the laws of the tackle contest. He never required the tackler to release the ball carrier and then would penalise the tackled player for non release. He was bad all through the match, but diabolical in the last 10 minutes.