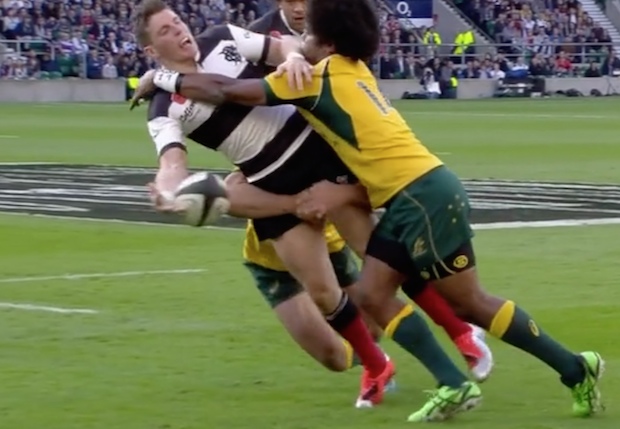 Although only against the ragtag bunch of international misfits this game proved valuable giving the Wallabies a tune up game for their new coach and a good 85 odd minutes of mostly end to end running rugby.

It was, however, hard to tell if their was an improvement in the bench with our starting props and half combination waiting there .

Here are my Wallabies player ratings:

Failed to catch a simple pass early putting gifting the opposition a midfield attacking scrum. Hit back however with a try from close range off a Genia short ball. Would love to see him get involved more.  5

Regressed to his super rugby rugby form, gave away breakdown penalties, forgot how to throw, stripped of the ball in contact. Hopefully this is the game he had to have because we’re in trouble if he cant get back to his Bledisloe 3 form for next week and beyond.  4

Pinged early for his usual scrum side collapse ‘The Hinge’ got the upper hand against his opposite binder early in the 2nd half, however even when he’s scrummaging better in the referees eyes, they still don’t stay up. 4

Carter has improved his effectiveness running into contact and was rightly rewarded with a try. He was looking too much to link up rather than create a new advantage line, but this ability will come with experience as he hasn’t bent the line previously. 6

Horwill played the whole 80 and no doubt tried his guts out, looked to hit more rucks and get more effective carries. Unfortunately missed a few key tackles late in the game. 5

A couple of good runs off Toomua early, gave away a penalty for a deliberate slap down before going off with a hamstring injury (Replaced by McMahon after 20mins). 4

New wallaby captain never short on effort, went to the blood bin early and came back on only to find himself 1 cm too short for a try. Made a key game saving tackle on Todd late in the game. 6

Was able to get into space and show off his speed a little more in this game. One huge play off QC and Speight had him down the right wing in the first half, however we were unable to immediately capitalise from this. Played every minute of the game and made a few nice runs. 6

A good first game back, Genia came back from a poor knock on to have a decent game clearing messy rucks early to hit short runners for trys. Cleaned up a tricky hacked on grubber sweeping. Not the Genia of old but hopefully on his way back there. 5

Seemed to underplay his hand a lot, could have taken it himself especially with the wide rush up defence on display when the wallabies had good set piece ball. Some decent and poor long passes but faultless on the tee. 5

Some fantastic involvements including a highlight reel deck chair fold on Slade. A try of his own from a simple overlap and a quick line to Slipper for Foley’s try. I’m taking a point off however as I don’t think wingers should get chased down even if they have been on the whole 80, this also would have iced the game and I could have not thought we’d lose another after the siren. 6

Called for a forward pass early Toomua had a serviceable game on attack but it was his strong defence and combativeness at the ruck that earned him an extra point. 6

His ability to secure an extra metre and quick ball as well as making the odd line break has made this man one of the most important in the team. Unlucky not to score a few times in this game, Tevita would have finished with the most runs and metres. I almost want to give him an extra point for Samo-ing Adam Thompson during his solo effort early in the 2nd. 8

Not everyone can have a Skelton debut. Henry had a few good involvements early in the first but struggled for room up against former wallaby and Twickenham favourite Nick ‘the honey badger’ Cummings. Showed a couple of times what he was capable of but the Barbarians seemed to have 3 or four players in his channel every weather attacking or defending.  5

Almost got a 5, but those hands for that intercept, surprised he didn’t use his left foot step. Caught out on defence but needs to try those things to further hone his positional instincts. A nice counter attack option to open up Horne after Genia defused a tricky grubber.  Would have finished with the most offloads.  6

Nothing Noteworthy. And so a better game than his reds counterpart. 5

Shows the Hooper like attitude that Robinson lacks, many involvements off the bench, called for a quick line out to put Foley away untouched. 8

Steadied the ship and got involved. 7

Came on for a blood bin and then again for the last 10 (15). Skelton really had little effect. 4

This is the abrasive young, fast back rower we’ve been waiting for I’d seen him do similar things for the Rebels and Rising but not consistently, lets hope he can bring that into his game. Busted tackles at will and strolled over in the 67th minute. 8 MOTM

Nice pass to an open Horne off the back of a ruck. Other than that not much wrong or right. 5

Added a spark when he came on, took on the line a bit more and was energetic. Great game awareness saw him score off some good Horne and Slipper work. Missed one get-able conversion. 7

Broke the line with his first touch and was able to link up with support. 6

10 – A legendary performance to go down in the history books

7 – Good game with a few sparkles