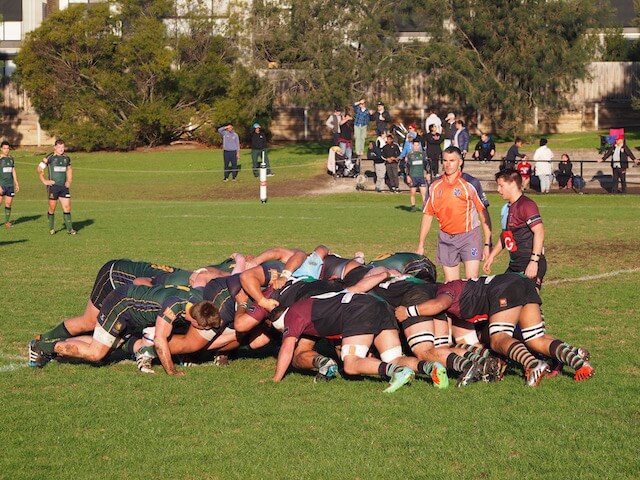 The awaited top of the table Dewar Shield clash ends in an entertaining draw, where both team could have scored a win.

Despite some wasted opportunities, it was a hard-fought battle at Ashwood reserve.  In a tight encounter, both teams were held to ten points each.

The kick-off was delayed, due to a serious injury in the match prior to this one.  Play commenced at 4:10pm, an hour after the scheduled start time.  We wish the injured player all the best in his recovery.

Harlequins were early on attack, and put Melbourne under pressure.  However, they were unable to break their defence, and Melbourne hung on.  A lazy ruck infringement gifted Melbourne a Penalty, well within kicking distance.

Morete missed the penalty kick from 35 meters out, leaving the scores at nil-all. 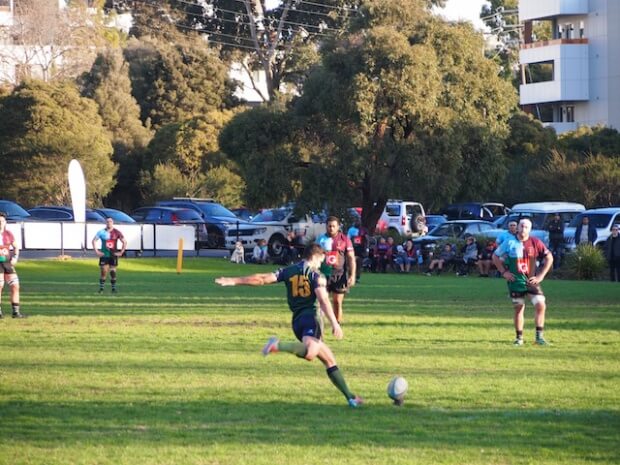 The missed opportunity gave the Unicorns some courage to start applying some pressure on the home team.  Melbourne enjoyed a period of dominance, but Quins were held the line, and didn’t conceded any points.

At the 20th minute Harlequin capitalised on a perfect counter attack.  Mick Snowden kicked the ball deep into the Quins defensive lines from inside his 22.  The ball was caught by Owade who broke several tackles on the right wing before pushing back inside to the support of Van Zyl.

He was quick to see Vole free on the left and the outside centre launched himself towards the chalk line.  He broke three tackles to score the first try of the match.

The conversion missed by Lloyd Johansson, the score remained at 5 – 0 to Harlequins.

Vole celebrates the try with his team-mates 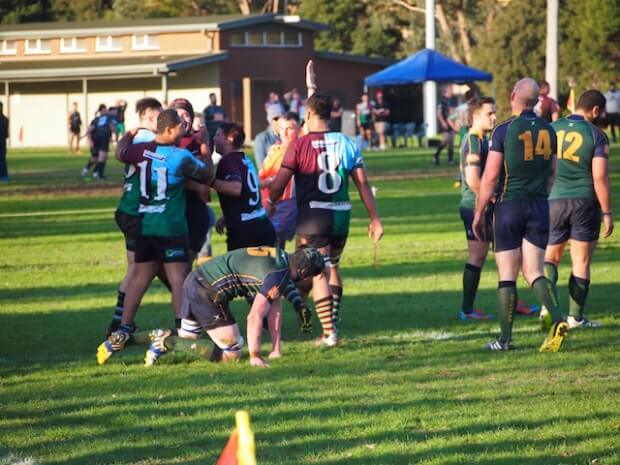 The Unicorns kept their composure and went on the attack, but the Quins’ defence wasn’t showing any holes.

Despite strong resistance, Melbourne found a hole in the defence and scored a Try.  Crichton was the man who found the hole, placing the ball right under the posts.

Morere success converted, moving the score to 7 – 5 to Melbourne at the break.

The second half saw much of the same as the first, with both teams pushing each other to the limit but not finding any space in-between the defensive lines.

At the 45th minute the heat of the battle got a little too much for Lloyd Johansson.  His ill-discipline cost him dearly, with Darren O’Brien sending him to the sin bin.

Despite playing with a 14 men the Quins didn’t gave way to the visitors and the score didn’t changed for the whole 10 minutes.

In a twist of irony, it was the former wallaby to have a chance to put his team in front.  Johansson missed an easy penalty, minutes after coming back from the bin.  Scores remained at 7 – 5 to Melbourne.

Johansson misses from the tee 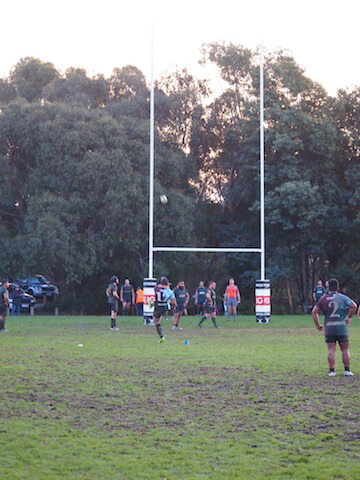 With few chances for each team it was Unicorns’ kicker Deina Morete time to go to the tee.  His first kick went out on the left.  The second kick, it was on target from short distance.  Scores 10 – 5 Melbourne.

Harlequin hasn’t won each game of the season by chance and demonstrated it with a powerful reaction.

Harlequins had to dig deep if they were any chance of a rescue.  Pushing hard deep in Melbourne’s 22, Quins found a way through heavy traffic to score a Try.  Owake was the try scorer, and Harlequins now had a chance to snatch victory.

With two minutes to go Johnasson conversion could have won the game for Harlequin, but the centre instead of placing the kick went for power.  He missed the posts to the left.

Before the final whistle the visitors had the last chance to close off the game, Morete ran away from his half with a counter attack and a grubber kick but, when already deep into the Quins’ half tried to control the ball but lost it forward.

Harlequin’s perfect season has been spoiled by a gallant Melbourne Unicorns. The Quins entered the match with an incredible record of all wins with a bonus point but could have well ended up with their first loss of the season.
Melbourne was looking for revenge after having lost they only game in the first encounter with the Quins and were so close to obtain it.

The draw is the correct result for two teams that had several chances to close the game but weren’t able to do so.

Several occasions were missed and can be described as a non-game changer. Morete’s and Johansson’s misses from the tee could have provided the winning strike to their teams.
Morete’s fumble on the last play of the match could have delivered the win to the Unicorns.

Harlequin’s Antonie Van Zyl directed his team with precision providing quality balls to his teammates.  He had good support from a seasoned player like Mick Snowden, and was up for the challenge.

The other games of the round didn’t provided any surprises and will ensure the final games of the season will be a tight fight for the fourth spot on the play offs with Box Hill now secure of a place in the finals.

The Broncos beat the Students to make up for last week’s  loss against Endeavour Hills and ensure finals actions.
With fourth placed Power House resting, Moorabbin Rams took their chance beating Footscray and getting only one point behind the ‘House. Endeavour Hills also kept the pace with a win against the Pirates.

Next round will see Harlequin hosting Power House and Melbourne Unicorns receiving the Melbourne University, with Footscray and Southern Districts battling for nothing more than honour all the lights will be on the clash between Moorabbin and Box Hill at Keys Road Reserve.