It was with great relief and excitement I read that the ARU had again taken it upon themselves to implement a “Third Tier” competition, one so dearly needed in the Australian Rugby environment.

I have had the pleasure to experience the ITM cup, the national provincial championship in New Zealand, first hand. I’ve also played in a similar concept – the Australian Rugby Championship (ARC) – in which I was fortunate enough to be a part of the inaugural champions, the mighty Central Coast Rays. 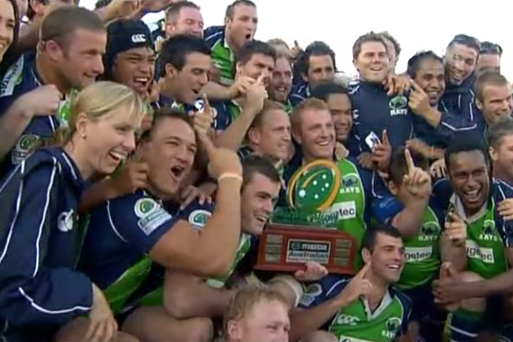 It is no secret that Australia’s player depth is no way near that of either South Africa or New Zealand, with these teams appearing to rarely be tested even when there are injuries to their national team. A prime example of this was last year, with the All Blacks having lost number 6’s Adam Thompson and Jerome Kaino to overseas and had Liam Messam out injured, managed to call on the likes of Steven Luatua. Many people in Australia had never heard of this guy, but they soon knew him after his first game in the All Blacks jersey.

A Third tier competition is also the perfect stepping stone between club rugby and the next level up, Super Rugby. It is a huge ask for a club player who has come out of the Brisbane or Sydney club rugby scene to step up and make the transition into Super Rugby. There are plenty examples of players who have been faced with this situation who have played one, two or maybe three games and haven’t been able to handle the physicality or intensity and are then never to be seen again at Super Rugby level again.

The power of free to air

The ARC competition was well received by both the players – who spoke highly of the quality of rugby and the opportunity it provided for the developing players in particular –  and the viewers, particularly those who had not been exposed to the great game of Rugby Union previously. How did this exposure occur? Two games every weekend were broadcast on free to air television, a great initiative by the ARU. One on Saturday afternoon on the ABC, with the other on Sunday afternoon on ABC 2.

This lead to a somewhat new following for Rugby Union, as the competition was still running whilst the Rugby League finals were on and even continued for a further two weeks past the conclusion of the NRL grand final. In this way Rugby Union was able to reach new markets.

After the conclusion of the first week of finals for the NRL, the next two weeks of finals are played on both Friday and Saturday night, meaning the ARC had no competition for viewers, and many diehard League lovers having no choice but to watch the ARC for further football entertainment.

Being from Dubbo, very much a working class town, a great number of the locals do not have pay TV. My parents only installed pay TV just before the commencement of my second season of Super Rugby with the Waratahs back in 2008 with the old man’s words being “Now we’ve gone and got this pay TV on you better make sure you make that team”. Thankfully for my sake I played 12 of 15 games and was fortunate enough to play in the Super Rugby final that year.

With still only approximately 1/3 of households having pay TV, the majority of the Australians are rarely exposed to our great game except for Tests in Australia or New Zealand (let’s face it’s a hard ask to get  anyone, let alone the League lovers up at two am to watch the South African games). Many of my friends, who are and probably will continue to go without pay TV ask me when they are going to start up “that mad Rugby comp that was on the ABC?” as it filled in their weekend afternoons. These are diehard League fans.

The focus for this competition should not necessarily be solely on generating income, obviously revenue is crucial to the survival, but there should be a great focus on exposure.

The ITM in New Zealand has games on TV from Wednesday to Sunday. With four or five games a week there’s no reason the new competition could not do something similar; providing a game Thursday night, Saturday afternoon, Sunday afternoon and Sunday night, and once the League has concluded moving these game to primetime on Friday and Saturday night. Sometimes over in New Zealand, teams were required to play twice in the same week, generally having a Wednesday night game and the backing up again Friday so as to create another night time slot to watch a game and also to make the season shorter.

The non-prime time games are probably more appealing to pay TV as they need the product more than free to air does at these times and are hence more inclined to pay a higher figure. This could be supplemented by enticing people to attend these games by offering kids or students entrance free of charge. The teams could also offer food packages that could feed the family without charging an arm and a leg, again to entice families to make a night of it and a not to be missed event, with the focus on being getting them in rather than make it a money maker.

Having had the opportunity to hear Bill Pulver discuss with the players directly early into his term as the new CEO of the ARU about the status of the game and where it’s headed in the future, I’m well aware he is keen to get the product of Rugby Union onto free-to-air in the future. Again the ARU will have taken note of how the A-League has now managed to secure one game a week on free-to-air, increasing exposure.

There will be a few sceptics out there, as there always is, but Rugby needs something to reinvigorate it in this country. They mightn’t have got it perfect at first but it’s a start, and one that is definitely in the right direction.  The time is now to implement a new competition, with Australian Rugby needing a new product to increase both exposure and revenue, with the game having gone into a steady decline since the 2003 World Cup after it hit an unprecedented level of participation and following after the 1999 World Cup win, 2001 Lions tour and 2003 World Cup in Australia all came within quick succession.

But hey, what would I know? I’m just a country boy from a working class background that was saturated and surrounded by League growing up and was drawn to this great game by watching the Wallabies win the 1999 World Cup, John Eales kick us to historic Bledisloe victories, school boy rugby games attended by 15000 people, and the great spectacle that was the 2001 British and Irish Lions tour.

All on free to air TV…

Beau Robinson has played rugby for the Wallabies, The Waratahs, Bay of Plenty and currently for the Queensland Reds. He is a co-founder of Suporda.com, a website that provides amateur and professional rugby players and coaches with a safe place to share professional contacts and qualifications.