Sydney Rays bask in glory as Spirit fade in the damp

Sydney Rays bask in glory as Spirit fade in the damp

The Sydney Rays made it two wins from two with an impressive second half performance. Maintaining an unbeaten start to this years NRC with a bonus point victory over an uninspiring Perth Spirit.

What a difference a week makes – I found myself returning to North Sydney Oval having experienced near-perfect conditions last Sunday, in the sort of conditions that make a Perthshire boy feel at home.

Sydneysiders found themselves waking up to torrential rain and the prospect of watching a classic on the only Friday night game of this year’s NRC was slim. The rain did ease slightly and by kick-off those of us hardy souls that braved the conditions were hopeful, if not expectant, of a decent game ahead.

The early stages of the game were dominated by the conditions, with the ball being dropped or lost in the tackle every other minute. This was interrupted by a good linebreak by Brynard Stander, which resulted in fellow South African Ryan Louwrens skipping through a tackle to score the game’s opening points. Jono Lance got the conversion and it was 8-0 to the Spirit after 5 minutes. They almost scored again immediately, however Richard Woolf managed to get across and stop the impressive Anaru Rangi making a break for the line.

The Rays were starting to get back into the game but any promising moves were breaking down in contact and they were giving the Spirit easy ball from poor kicking. 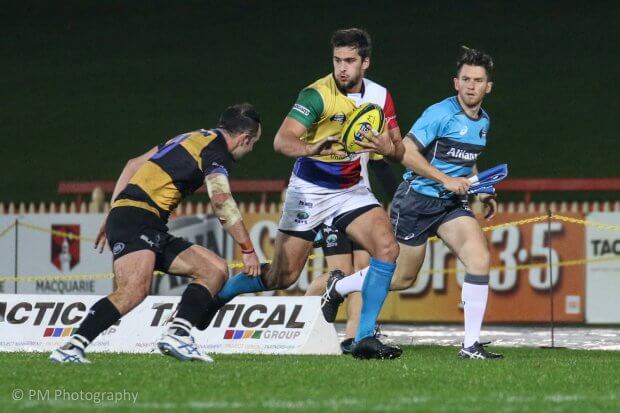 It was going to take something special to break this cycle and on 22 minutes Rays captain Matt Lucas put through a lovely kick turning the Spirit defence and winning his team a lineout. The Rays duly won clean ball and strong runs from Will Miller and Damien Fitzpatrick created the opportunity for Harry Jones to go over in the corner. Lucas missed the tricky conversion and it was 8-6 to the Spirit.

The Spirit then did their best to go into the break as the losing side, first kicking out on the full from the restart then going down to 14 men with a yellow card to Stringer. But it was to remain 8-6 despite an impressive end to the half from the Rays forwards with Miller and Michael Wells making their counterparts lives very difficult.

The second half started perfectly for the Rays. Angus Sinclair made a nice run before sending Seb Wileman away to score in the left-hand corner. Lucas got the tricky extras this time and it was 14-8.

Straight from kick-off Lucas was hit late and the Spirit found themselves down a man once more.

The Rays were gaining momentum and only a great tackle by replacement Hadleigh May stopped the Rays furthering their lead.

The penalty count against the Spirit was growing and on 60 minutes the Rays opted for a scrum after an offside decision, this resulted in Fitzpatrick scoring in the corner, his last effort before leaving the field after a very impressive days work. Lucas again got the extras and it looked like the Rays were safe at 22-8, this was helped by another yellow card being shown to the spirit after the try had been scored.

With the conditions once more taking control, the latter stages of the game were punctuated by knock-ons and penalties. There was one last important score however, another penalty allowed the Rays to kick to the corner. The ball was well taken by Nick Palmer and Ezra Luxton scored from the maul. This made it 28-8 and more importantly got the Rays the bonus point. 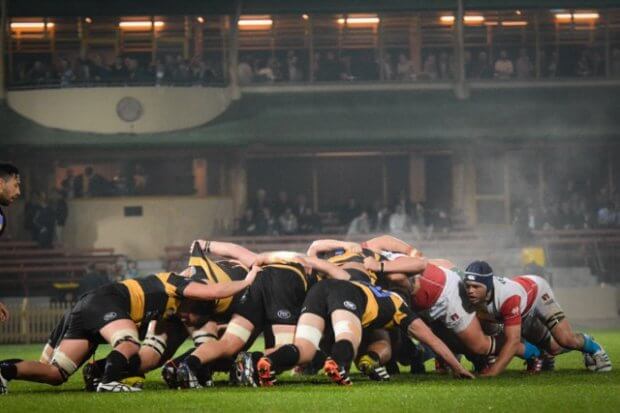 Going into the last quarter of an energy-sapping contest the Spirit found themselves 22-8 down and with only 14 men on the field. Fitzpatrick scored the Rays third try and Hadleigh May found himself on the naughty chair for ten. This took the sting out of any comeback plans the Spirit may have had.

In conditions like today it’s always going to be tough for the backs to show their class, and so it proved with the Rays pack dominating the play.  Almost any of the Rays forwards could get a nomination here (including the replacements) but in the end Will Miller was very impressive both in the tackle and at the breakdown causing much of the Rays turnover ball. Fitzpatrick also had a great game and scored another NRC try while Lucas moved the side round the park and showed the drive and commitment required to take the points in tricky conditions.

Will Miller was the pick of the bunch in a very impressive forward pack, with Luxton, Hunting, Palmer and Hugh Sinclair also showing that they could play at a higher level.  With Irae Simone deservedly getting a shot with the Tahs next year he may be unavailable for the Baabaas but his fellow centre Seb Wileman showed that he could also make the step up.  The Spirit have a few Premier Grade players in the team and the pick of these were Onehunga Havilli, the big number 8 already having a Future Force place and winger Eric Vasukicakau looked like he could be very dangerous on a dry track