Brisbane City recorded their first win of the season to retain the Horan-Little Shield, but they didn’t have it all their own way against the Western Sydney Rams.  The 44-36 victory at Ballymore on a ripper of a spring afternoon, showcased some Brisbane brilliance however the Rams went close to bullying their way to a surprise win.

The Rams have an extremely physical forward pack who love to run with the ball and whilst Brisbane’s defense was willing early on, the Rams were able to make plenty of metres. A strong bust and off-load by the Rams No.8 Tyron Viiga resulted in a try to barnstorming hooker Brandon Paenga-Amosa (his third of the season).

Brisbane City bounced back quickly and following a scrum penalty and a quick tap, Jake McIntyre passed wide to find winger Alex Gibbon with a few defenders in front of him. Gibbon has previously proven his finishing abilities and did so again with a strong burst to the try line.

The impact of two of their Reds stars was soon to come to the fore for City as Nick Frisby spotted space down field and put in a well placed kick. As the crowd groaned to see that hooker Andrew Ready was the only chaser the ball hit one of those famous WACCA cracks, bounced infield and Ready was able to regather. Frisby cleared the ball quickly to the charging Lukhan Tui to power is way over for a 6-pointer.  It was a double blow for the Rams as they lost their damaging winger Fabian Goodall to what seemed to be a broken leg.

It wasn’t long until the big Rams pack were again bombarding the Brisbane line and from a lineout, a result of a Brisbane penalty, Rams (and former Red) Scott Gale snuck over for a try, which was subsequently converted for a 14-all scoreline. In a further blow for City, flanker Michael Gunn was yellow carded for incorrect entry at one of the preceding rucks leaving Brisbane short-staffed for the rest of the half. 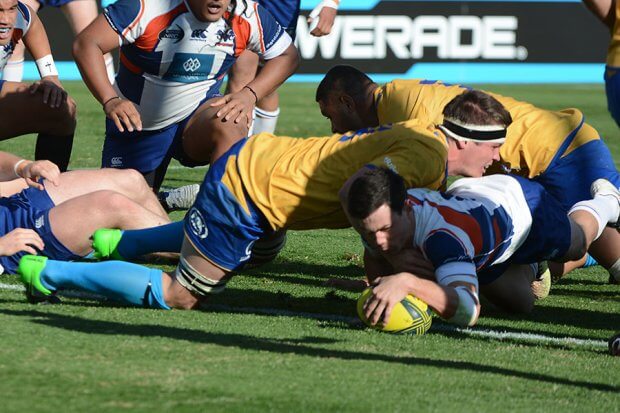 However the numbers were evened up just minutes later when Will Skelton got a yellow himself for perhaps an attempted high tackle? Frisby managed to fall under what may have been a swinging arm and Big Willie was, perhaps questionably, sent to sit with Gunn in the sin bin.

Brisbane kept the pressure on and following a snaffle from Ready the ball was passed through Pettowa Paraka to Luke Beauchamp and then to captain Sam Talakai to barrel over under the posts.

Big Lukhan Tui was then felled by a head high tackle himself, that went unnoticed by the match officials, and whilst the big lock was struggling with the head knock in the background, the Rams shifted the ball into the attacking zone for replacement back Luke Smart to speed away, after some great work from flanker Tupou Sopoaga,  to score right on the siren The teams went to the change room with Brisbane holding a tight 2 point lead (22-20).

City’s discipline was a real concern and a string of penalties against them would soon see Houston take his turn on the naughty chair with a yellow card of his own.  The Rams made them pay immediately as Tyron Viiga crashed over to score from the back of the scrum.

With the score at 30-28 the Rams were putting the City team under immense pressure and proving themselves impressively resilient and persistent.

While it was the Super Rugby stars that had provided the big plays for Brisbane so far, but this time it was an overlooked club journeyman that would next set Ballymore alight for the moment of the match.  Mitch Felsman of the Brothers club was only brought into the Brisbane City squad after injuries to Karmichael Hunt and Junior Laloifi. Coming into the game at the 51minute mark, Felsman received the ball from a turnover just metres from his own line. Mitch then burnt the cover defense to get on the outside of the Rams before weighing up his options and chipping through to regather and score a remarkable try.  If that wasn’t enough he then promptly kicked the conversion from the side line. 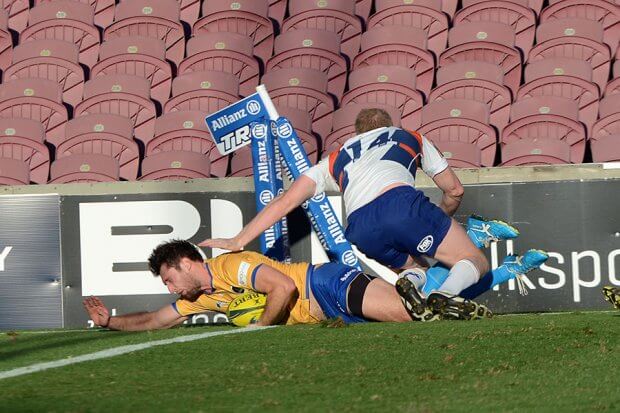 Mitch Felsman made the most of his opportunities with two cracking tries.

It was déjà vu all over again with another yellow card (to Andrew Ready) and another powerful Rams try (Taunaola Kei)  which was converted to keep the margin at two points with just 14 minutes to go in the match.

That man Felsman was at it again though to score his 2nd NRC try, on debut, following a delightful cut out pass from club mate Pat James. The conversion was missed meaning a hectic final eight minutes as the Rams looked to secure what would have been a highly deserving draw. It wasn’t to be however with a Rams knock on whilst hard on attack the final play of the game.

The Rams have a fantastic forward pack, with plenty of size and skill and they love the  physical stuff with their backrow of Sopoaga, Viiag and Rhys Allen at the heart of everything. Brisbane had to rely on some big plays from key players to get their points and, whilst happy for the win, will know they will have to improve big time if they are to retain the Horan-Little Shield next week against the Canberra Vikings.

Mitch Felsman’s  brilliantly taken length of the field try almost as soon as he took the field, and then converting from the sideline. It was a momentum changer in a tight one and seemed to give Brisbane the confidence to hang on.

This was a tough pick for me and I came very close to giving the award to Tupou Sopoaga from the Rams. Nick Frisby was also a strong contender but was replaced at the hour mark, which worked against him in my eyes. In the end I gave it to Brisbane City loosehead prop, Pettowa Paraka who played all but the last seconds of the game and was pulled off some key steals, big hits and strong runs.

The Rams had some wonderful performance none moreso than their openside flanker Tupou Sopoaga. But he was well supported by his Number 8 Tyrone Viiaga and hooker Brandon Paenga-Amosa. For Brisbane City replacement winger Mitch Felsman almost stole the show with two late tries displaying his blistering speed and game smarts. 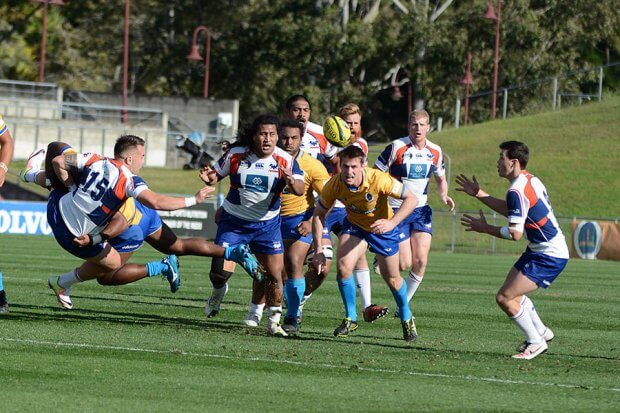