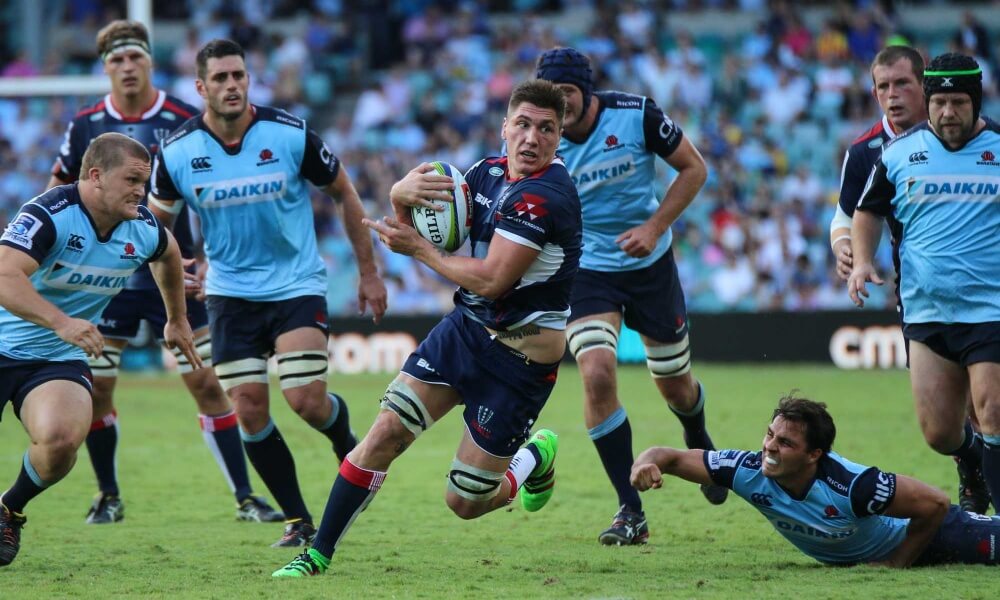 Most of the stats from this game are as close as the final Waratahs 17:21 Rebels scoreline.

Despite being held scoreless in the 2nd Half, the Rebels had done just enough to  get the win.  The Waratahs struggled to turn their 2nd Half Possession and Territory dominance into points.

The Rebels maintained a high level of involvements throughout the match.  The high work rate and involvement of the Rebels Back Row certainly contributed to the final outcome of the match.

The Waratahs bench players, particularly Lousi, Robertson and Palu made significant contributions to the 2nd Half fightback.  Waratahs Ruck Involvements in the 2nd Half were almost double those of the 1st Half.

Mitch Inman’s Ruck Involvements rank him alongside the Forwards.  Other strong involvements from the Rebels were from Tamati Ellison 19 and Reece Hodge 13.

The most Ruck Involvements from Waratahs Backs were from Matt Carraro 17, Dave Horowitz 12 and Israel Folau 12.

The Rebels were the only winning Aussie team from Round 6; the Reds had a bye.

The Brumbies showed the lowest level of Total Ruck Involvements resulting from a low level of Attack Ruck Involvements.  This may have been part of the game strategy to address the counter-attacking strength of the Chiefs.

The Force had the most Total Ruck Involvements due to strong support of their ball carriers against the Highlanders.

The Waratahs again show a fairly even distribution of ruck involvements across all player groups.

The Waratahs Locks had the highest level of involvement due mainly to the efforts of Mumm and Lousi.

The Waratahs Back Row had the least involvements due mainly to Holloway’s low level of ruck involvement in his 40 mins.

The Rebels Backs, had the highest level of ruck involvement of the Backs.

The Waratahs Locks and Force Back Row showed the highest level of support for their team’s ball carriers.

The Force Backs the lowest level of involvement.

Once again the spread of the Defensive Ruck Involvements (DRIs) indicates the main differences in strategies and game plans.  The Force had 60% Possession against the Highlanders.  The other teams generally had close to even Possession (across the 80 minutes).

The Brumbies were very subdued in their Defensive Ruck Involvements.  Pocock and Fardy had nearly half of the Brumbies DRIs.

The Rebels Locks continue to have few DRIs.

Matt Hodgson from the Force had nearly 20% of his team’s DRIs.

As is usual the Rebels Backs were highly involved in DRIs with strong contributions from Ellison and Inman plus Shipperly and Hodge.

Good Ruck Success efforts from all Aussie teams apart from the Brumbies who were generally out-muscled by the Chiefs.  The Chiefs earned 12 Turn Overs Won (TOW) compared to the Brumbies 9 TOW.  Pocock earned an impressive 6 TOW from his 17 DRIs.

The Force showed a poor tackling effort against the Highlanders with 32 missed tackles.

The Brumbies had 22 missed tackles against the Chiefs.

After Round 6, the Sharks lead Super Rugby with an average Tackle Success of 88%.

15 Handling Errors per game is about the average in Super Rugby.

The Chiefs had only 11 HEs.

The Highlanders 23 HEs certainly helped keep the Force in the game until the closing stages of the match.

As usual Back Rowers make up the bulk of the highest Ruck Involvements with strong contributions from Locks, Mumm and Coleman, and the lone Front Rower, Heath Tessman.

Hodgson’s 51 TRI’s is the highest game total so far this season.

After 6 Rounds the higher average TRI’s/80 mins as follows:

Brumbies, Rebels and Waratahs all Byes in Round 7.

Next Ruck Analysis after Round 8 games which has the next Aussie Derby – Brumbies V Waratahs.

The Tuesday Top 5
Podcast 204 – Face to Face on Facebook