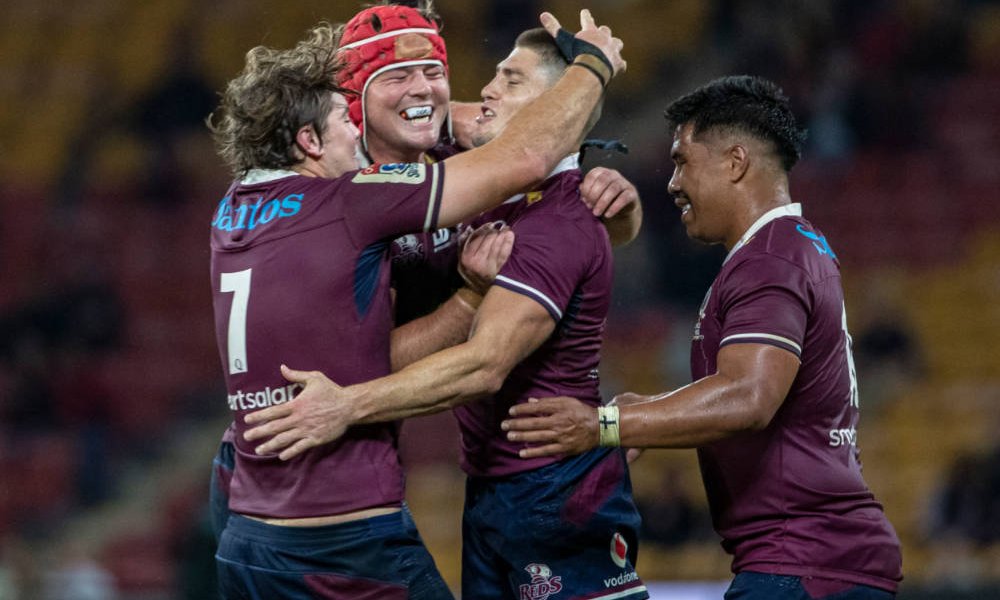 After last week’s not-so-splendid spectacle against the Rebels, the Reds return to Brisbane to face a Force team keen to do all sorts of damage to anyone and everyone they think wronged them. Can the Reds put on a more coherent, structured 80 minutes? Will the Force make the Reds the first victim of their redemption tour? Let’s find out.

Beautiful conditions greet us in Brisbane. calm and clear, a bit chilly by Brisbane standards. The Reds kick off and we are under way! Two early penalties while on attack killed any early momentum the Reds might have been looking for. A third penalty put some pressure on the Reds but some solid maul defence and a turnover in a wild ruck saw it off.  We then settled down for a bit of  kicking duel with the Reds finding the territory advantage.

Lineouts (or the lack of success in them) was again an issue, with the Reds losing two of their first three throws. Ten minutes are down and the Force have an advantage for offside, Jono Lance has a pass knocked down, and ref Nick Berry had the whistle in his mouth, a few Reds hesitated and Marcel Brache gets a great ball to Jack Macgregor on the left and he scores in the corner. A great conversion from Prior and it’s 7-0 Force.

Almost immediately the Force are in again, Brache again linking wide with Stander who threw the last pass to Byron Ralston on the right. Prior again converts from the sideline and all of a sudden it’s 14-0 Force after 15 minutes.

The Reds maintain some composure and hit back. A bullocking Feauai-Sautia run on the right opened space on the left and after both Salakaia-Loto and Hoopert nearly spilled it in succession, O’Connor found Brandon Paenga-Amosa and he crunched Jono Lnace to score. O’Connor made the kick from the side and it’s 14-7.

A mid-field scrum found a great opportunity for the Reds, and they immediately capitalised. Hamish Stewart found Hunter Paisami running a gorgeous line and he burst through the Force line, and linked with Jock Campbell who was able to run it under the posts and it’s 14 all just like that.

The Reds poured it on once more, off a James O’Connor 50-22 kick and the resulting limeout saw several phases of forward plunges until Taniela Tupou burrowed over. With the conversion the Reds have put on 21 points in 10 minutes. 21-10 Reds.

In the shadows of half time the Reds were attacking with numbers on the left. James O’Connor threw a flat ball to Paisami which was intercepted by Byron Ralston who ran 90m for his double. Incredibily, the conversion was blocked by Filipo Daugunu and we go into the sheds with the Reds up 21-19. It could so easily have been 28-14.

We kick off and an early Force error leads to a Reds scrum and on the right, some clever tip passing from Paisami to Stewart and then finding Daugunu on the wing who again hot stepped his way around two defenders to score. Another O’Connor conversion and it is 28-19 Reds.

After 55 minutes, Liam Wright tried a reprise of  his disallowed effort, and came around a ruck and grounded the ball.  The TMO again denied him and ruled a 5m scrum. After all that excitement we are where we were five minutes prior.

We go through the usual doldrums where substitutions interrupt the flow of the game. Taniela Tupou nearly made a mirror intercept of Ralstons earlier intercept, but it was blown up for a penalty.

A window of light opened for the Force with ten minutes to go- Hunter Paisami tipped Kyle Godwin and deservedly got a yellow card. From the lineout, a few phases ensured that ex-Red Andrew Ready dove over. Lance doinked the kick and it is 28-24 Reds with 9 minutes remaining. Squeaky bum time it is.

Some desperation attacking ensued from the Force as they tried to win it from everywhere. A calmer head would have said that a slow march up the field with a man advantage would have likely worked but each to their own. After another Force turnover, the Reds marched downfield and James O’Connor lurked in the pocket. He duly converted with a wobbly droppy an with a minute to go it is 31-24 Reds.

A crowd of 6,890 witnessed the game which was another step in the evolution of this Reds side, and not a disgrace for a Force side that needs games like these to learn after a few years as the big fish in the pond. Too many penalties given away did at some point threaten to derail the Reds but ultimately they prevailed.

The turning point was the second try for the Force. Down 14-0 the REds found a way to wake up and from that point on did not look like losing. There was a sense they had control and could respond when called upon. Still not a 80 minute performance but you take them when you can.

The last ten minutes caused some tension but the way the Force panicked in attack really meant that it perhaps was not as close or as tense as it could have been.

The man of the match was close and really despite throwing the intercept it goes to James O’Connor. His calmness in the last few minutes was a stark contrast to the panic displayed by the Force. Honourable mentions go to Hamish Stewart and Filipo Daugunu. Daugunu got through a lot of defensive work and looked lively each time he had the ball.

Assuming any sort of eligiblity issues are sorted Filipo Daugunu comes into focus on the wing. His three tries in Super Rugby AU have not been through pace but the balance and footwork.  Jono Lance was solid and composed and could easily find his way into a squad at some point. Hamish Stewart is also providing excellent support at 12 to the players inside and outside him. Byron Ralston would not look out of place in there somewhere either.