Waratahs vs Brumbies – things just got very interesting at ANZ… 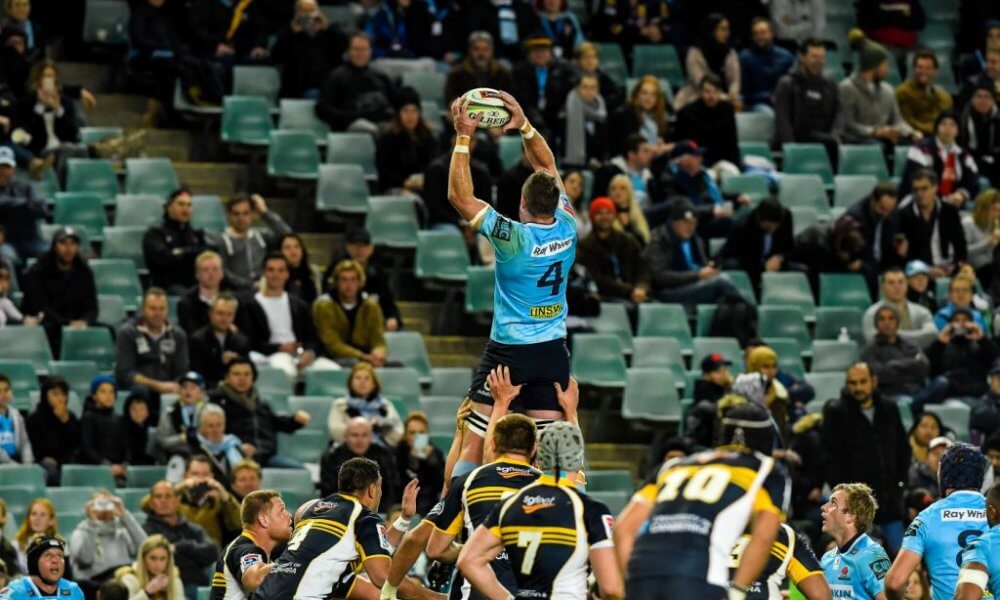 Waratahs vs Brumbies – things just got very interesting at ANZ…

Now that’s what I call a round of rugby!

Following up the incredibly entertaining Reds-Force match was not going to be easy, but low and behold, the Brumbies and Tahs did it!

The Brumbies claimed an incredible last gasp 23-24 victory over the Waratahs in Sydney last night, in a match that had literally everything. The reaction I’ve been seeing online from many Tahs fans has been negative: they choked, Simmons is a bad skipper, no direction, etc. You know, the usual buzzwords. You won’t be getting any of that here. This was, in my opinion, the best performance by the Waratahs in years, and really shows how dangerous this squad of players can be once they finally start getting wins.

The Brumbies came into this game as overwhelming favourites, having started the original Super Rugby season with five wins from six games, before following it up by beating a fast-finishing Rebels side in round one of Super Rugby AU. The team has been riding a wave of momentum since Dan McKellar took charge in 2018, going from middle of the table contenders in an under performing conference to last year being genuine title contenders.

The Waratahs, meanwhile, are in the middle of a much needed re-build, with new coach Rob Penney and his team taking the Reds route and starting to build talent for the future. A close loss to the Reds in round one was followed by a clutch win against a dangerous Force side in round two, with a fantastic second half performance that demonstrated a level of maturity around the game plan that we hadn’t been seen so far this year.

And so, these rivals clashed once again on a very dewy night in Sydney. 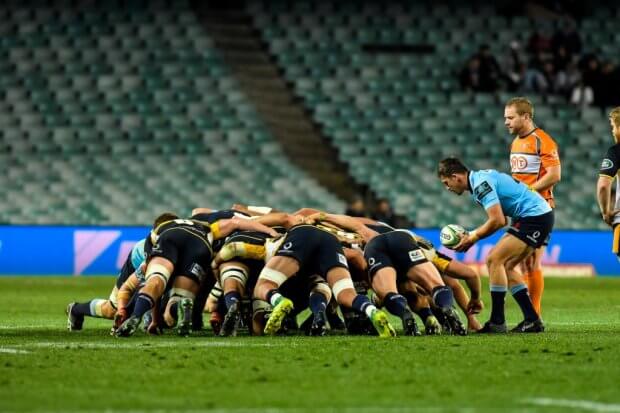 The game started very much how many expected, with the Brums winning back the ball soon after kick-off and working their way into the Waratahs twenty-two. The home side looked to be taking a more aggressive approach to their defence, however a fantastic cross kick from Noah Lolesio saw Will Harrison fumble the ball in goal and Tom Cusack fell on the ball to give the away side the first points in the game. Lolesio failed to convert, but the Brumbies were looking dangerous already, 0-5.

This was a critical moment in the game, as the response of the Tahs would be critical if they wanted to keep pace. Off the kick-off, the Tahs defence immediately got to work, and began to put considerable pressure on the Brums. When James Slipper was forced off with a concussion injury, the home side were able to regain the ball off the scrum and an upbeat tempo saw the Brumbies pinged for being offside. Will Harrison took the penalty goal, and the Tahs were on the board, 3-5.

Four minutes later, the Brumbies were pinged for being off-side again, and Harrison stepped up and converted another penalty to give the homeside the lead for the first time, 6-5. Just before the 20th minute, Jack Maddocks then passed the defensive line, and although the Brumbies were able to regather, they found themselves down a man when repeated infringements saw Andy Muirhead sent to the bin for ten.

The Waratahs turned to the maul to give the Brumbies a taste of their own medicine, and a genius move from Mitch Short saw Tom Horton peel around the maul and dive over to score a try on debut. Suddenly, with the try converted, the Waratahs were up 13-5, and had the Brumbies utterly rattled. 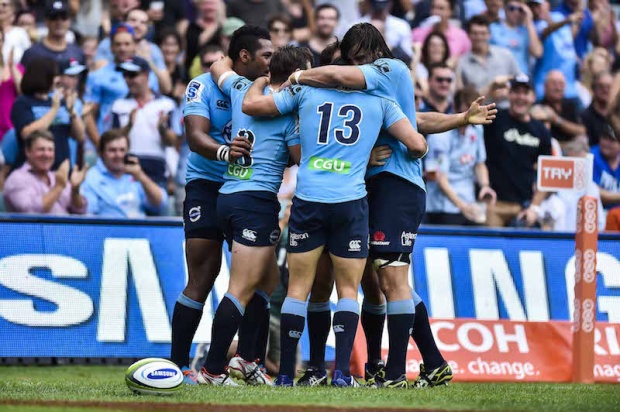 The Waratahs were also starting to show them up at scrumtime again, with the hosts starting to pull penalties over their more fancied opponents. At the 28th minute, off the back of more mistakes from the Brumbies, Harrison produced the try of the game with an excellent cross-field kick to James Ramm, who took advantage of the overlap and scored in the corner. Harrison converted, and the Tahs pushed out to a fifteen point lead. The fans were up in arms. This was proper champagne rugby.

The night got worse for the Brumbies soon afterwards, when in the 32nd minute Noah Lolesio went down with a bad hamstring injury, ruling him out for the rest of the match. The Brumbies turned to young gun Bayley Kuenzle, who started to immediately bring a bit more control and discipline to the backline. With them chasing the game, the Brumbies went to clutch-mode, and suddenly found themselves with penalty down on the Waratahs line. Turning to their maul, they were rewarded with a try to Folau Fainga’a. Kuenzle failed to convert, and the score was 20-10.

Suddenly, like a switch had been flicked, the Brumbies suddenly switched the tempo up. The Waratahs defence held strong until the 37th minute, when Tom Wright bust through on the short side again. Support arrived, and Rob Valentini picked the ball at pace to produce another barging try. Kuenzle converted, and suddenly the Waratahs lead had been whittled down to three points. The Brumbies attacked again, however the Tahs were able to hold them out until the hooter sounded, and the teams headed off for the oranges, ending a fantastic first half of footy.

Last week, the Waratahs came out a different side in the second half, and much like they did against the Force, they came out determined and focused. With an opportunity to take a critical win not only for their campaign, but for the confidence of this young team, they certainly needed it. The Waratahs worked their way into the Brumbies territory, and sustained pressure led to another penalty. Harrison converted, and the Waratahs were up 23-17.

The second half then turned into a real arm-wrestle. Both teams turned to their reserves, emptying their benches to try and gain some dominance. While the Brumbies looked dangerous every time they got the ball, the Waratahs were beginning to show them up at set piece, with their scrum disrupting the Brumbies. However, the most impressive performance was in the lineout, with the Tahs winning SEVEN lineouts against the throw. Add to this, Karmichael Hunt looked to be injecting himself into the game, breaking the line on several occasions and combining with young gun Joey Walton.

In the last ten minutes, the Brumbies finally started to challenge the Waratahs in general play. However, with every scrum and every lineout, the Waratahs would steal back the ball and boot it away, looking to pin the Brumbies down in their own half. The game was on a knife-edge, and despite the fact that they had somehow been outplayed for most of the game, the Brumbies were still in sight of winning.

Finally, in the 77th minute, over the back of sustained pressure in the Waratahs twenty-two and eleven phases  of forward play, Isaak Fines suddenly switched the point of attack and made his way through a gap to score right next to the sticks. Kuenzle wasted no time with the conversion, and suddenly, against all the odds, the Brumbies were somehow ahead, 23-24.

The Waratahs desperately looked to try and win the ball back, but the Brumbies kept it close and tight to wind down the clock, and as the hooter sounded, kicked it into to touch to to snatch the most unlikely of victories. 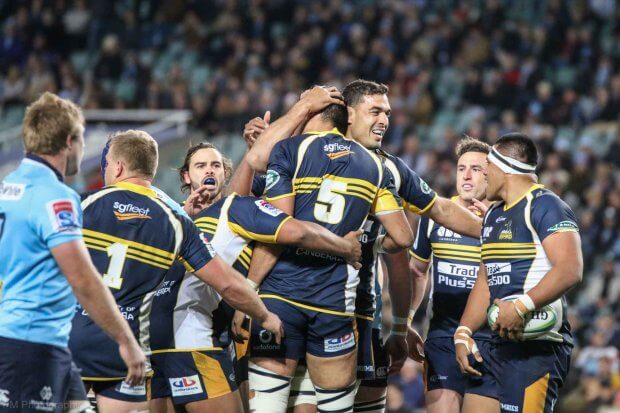 This win sees the Brumbies go five on the trot against the Waratahs in Sydney.

The only criticism I can give this Waratahs team in terms of strategy is their decision to repeatedly kick the ball away in the final ten minutes, but even then I can see what they were trying to do in terms of trusting their defensive abilities to bring them home. In terms of everything else however, this Waratahs side left everything out on the park, and then some. This was the best performance I have had the pleasure of seeing from them in years. The pressure they put the Brumbies under for the majority of the game was excellent, especially at set piece. Frankly, and I’m saying this as a supporter of the Brums, the Tahs were the better team for the majority of the night.

Rugby can be a cruel game, and I for one know personally what it is like to play a game where you outplay the opposition in nearly every way, yet they still find a way to win. To say however that this team choked would be flat out wrong. I, for one, will definitely be coming back to watch them again at some point this season, and if you are a Tahs fan reading this, you should too. This is a team that is going places.

But as much as I can praise the Tah’s efforts, I also have equal praise for how the Brumbies, despite being shut out of the majority of the game, still found a way to snatch victory. This win came from them playing together for the best part of three seasons, and trusting themselves to get the job done, no matter the method. Great teams are the ones that, despite being matched up in a game, still find a way to somehow win. The fact this Brumbies team is doing that speaks so much about how far they’ve come under McKellar, but also how far they can still go.

In the end, this was a game where rugby was the winner. It was a game that reminded us how good rugby can be. As a fan, I cannot ask for more than that!

The Tahs response after the Brumbies first try. The Brumbies have shown that if they take an early lead, they’ve often run over the top of the Tahs in previous encounters. The Tahs decision to slow the game down and claw their way back was a brilliant move, and gave them a critical edge to make the Brumbies earn their tries.

This is a tough one, as this match was a game of great team performances. For me though, the best on field for the Tahs was a tie between Joey Walton and Rob Simmons, Walton for his impact off Hunt and Simmons for turning the Brumbies lineout into chaos. For the Brums, Andy Muirhead played a brilliant game, looking dangerous on the wing and injecting himself all over the game.

The hooker role has been somewhat weak through much of this competition, but Tom Horton had an excellent debut at hooker with a try for his efforts, while for the Brumbies Irae Simone had to dig deep with Lolesio being forced off, and did extremely well to maintain composure in the Brumbies backline.