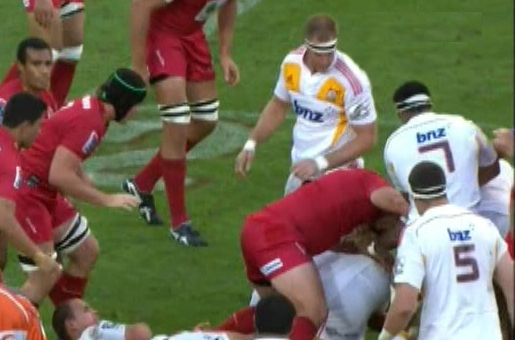 After the Brumbies good win over the Highlanders last night, the Reds needed a win in Hamilton against the Chiefs today to stay in touch with the Australian conference leaders; and they delivered a strong performance.

The Reds have had the better of the Chiefs in their last three matches dating back to 2010. Their match at Suncorp Stadium last year was a cracker with the Reds triumphing over the eventual 2012 champions 42-27. However the Chiefs came into this match in good form and only the Stormers had beaten them so far this year so not surprisingly the Reds were the underdogs.

On the back of Quade Cooper’s omission from the Wallabies logistics camp he had the chance today to show Robbie Deans what he’ll be missing out on if he continues to ignore him for the Lions tests. Cooper’s clash with Aaron Cruden was one of the talking points going into the match as was whether Anthony Faingaa could shut down Richard Kahui who has been in scintillating form for the Chiefs since his return from injury.

Chief’s coach Dave Rennie made the tactical decision this week to select his three most mobile backrowers in an effort to combat the Reds trio of Liam Gill, Jake Schatz and Ed Quirk who have been prominent at the breakdown this year.

It was all the Reds early on in the match with several good chances including James Horwill held up over the line in the first minute but it was Rod Davies who scored the first try after intercepting a Cruden pass before the Chiefs hit back midway through the half with a try to Bundee Aki. An attacking kick from Quade Cooper then pinned the Chiefs in their own 22 and when the Reds won a penalty they opted to take the lineout rather than the shot at goal. From that lineout several of the backs joined in and Schatz scored on the back of the driving maul for the Red’s second try.

The Reds had the better of play in the first half and dominated at the lineout but Greg Holmes was struggling at scrum time, giving away two penalties. The halftime score was 14-10 to the Reds.

The second half saw plenty of attack from both teams but again the Reds did a little more with their opportunities. Cooper scored a nice try after the Chiefs conceded a couple of penalties in their own half – his step back inside to break the line suggested that there is no longer any doubt about the knee he injured in 2011 and his conversion took the score out to 21-13. The Reds were then denied a try by Gareth Anscombe’s desperate work in cover after another intercept but not long after Davies crossed for his second after a wonderful pass from Will Genia. Cooper’s conversion made the score 28-13 and the Reds had already booked a bonus point.

Then the Chiefs started to come back at the Reds and the pressure started to tell with the Reds giving away multiple penalties and Anscombe kicking two more penalty goals. After Aki dropped the ball cold from a kickoff the Reds earned another penalty and Cooper was accurate with his kick to extend the lead back to 31-16 for the Reds. The Chiefs continued to throw everything they had at the Reds and after Anthony Faingaa was penalised and received a yellow card the Chiefs went in with the conversion narrowing the gap to just eight points, leaving it at 31-23 to the Reds.

The last fifteen minutes was action packed with both teams really stepping up the intensity and the Reds having to scramble in defence on a number of occasions to hold the Chiefs out. Cooper missed two penalty goal attempts in the last few minutes but the Reds did enough to hang on.

The Reds performance was their best of the season so far and certainly suggests they are going to be a genuine contender in this competition. With the bonus point secured they close the gap to the Brumbies to only two points ensuring that next week’s match between the two teams at Suncorp Stadium will be one of the matches of the season so far.

Quade Cooper’s try for the Reds in the 47th minute came on the back of the decision by Horwill to press on for a try rather than take a chance at three points – it set the Reds on the path to victory.

It’s hard to not name the entire Reds team but Rod Davies scored two tries (although he made some defensive errors), James Horwill and James Hanson were both very strong in tight and Will Genia was again very good. The Reds backrow also put in a fantastic performance.

If Robbie Deans wanted to spark a response from Quade Cooper, it seems to have worked – that was Quade’s best performance in some time scoring 16 points including a nicely taken try. He directed the Reds well in attack and defended well.