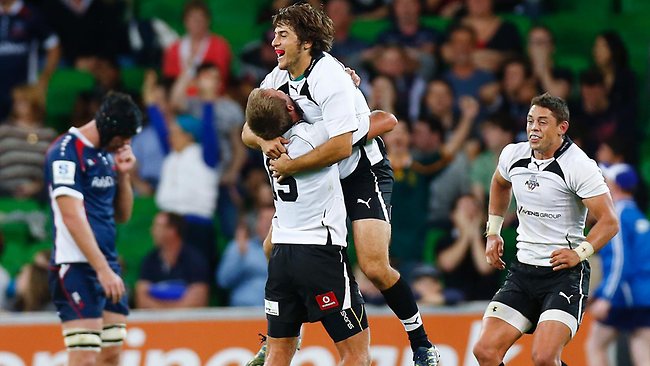 Tonight, a team whose province had fought tooth and nail for years to enter Super Rugby, with their doubters in droves and their backs to the wall, played with the intensity and grit of 22 men who would die for their jersey. They forced their opposition to give up the match, and took a deserved win. They were the Southern Kings.

When the Melbourne Rebels defeated the Western Force for the first time in 2011, I took it as justice. We had defeated the side who had cost us our rightful place in the competition. The Force didn’t deserve the honour of playing Super Rugby, and we showed them why. Cut to tonight, and I can’t help but think that the Eastern Cape faithful are saying the same thing. The Kings are a joy to behold – a club on a mission to unite their province. The Rebels, meanwhile, are in reverse. 70 minutes in, leading by a try, they gave up. You could see it.

While the Rebels play well on occasion, they don’t play like a team who want to play Super Rugby for their club, and capture the imagination of their province. There’s no pride in the jersey, and it took seeing the mighty Kings in the flesh for me to realise that.

The Rebels were on the attack for the first five minutes, but ball security was absent, the home side struggling to hold on to the ball. The Kings capitalised with some good runs, and made it count in the 9th minute, Andries Strauss setting up George Whitehead for a brilliant run, passing off to Ronald Cooke to touch down for a try. Demetri Catrakilis converted for a 7-0 lead after 10.

The visitors’ momentum continued, and they were soon down again thanks to a brilliant run from Shaun Venter, who ran half the length of the field to cross for the Kings’ second. Catrakilis converted again, and the Kings were up 14-0 after 15, Richard Kingi leaving the field after landing awkwardly in a tackle trying to save the try.

The home side had the ball camped out in their attacking half, and pointed to the posts when David Oosthuizen infringed at the ruck. James O’Connor converted and the margin was reduced to 4, 14-10 after 32.

The Kings did well to recover possession, and sent the ball close to their line. Hugh Pyle obstructed Demetri Catrakilis in a chase for the ball and conceded a penalty. Catrakilis converted and made it 17-10 after 34.

The small but vocal crowd at AAMI Park did their best to lift the Rebels as half-time approached, and they were rewarded when Jason Woodward broke the last line of defence, creating the overlap to send Angus Roberts over for his first Super try. James O’Connor converted and the half ended 17-17.

The Rebels carried the momentum into the second half, putting pressure on the Kings and forcing them to concede penalties. The Rebels were using the lineout to great effect, though the Kings did not seem interested in contesting many. The Rebels hit the lead in the 46th minute, when a penalty at the breakdown was sent over the crossbar by James O’Connor, making the scores 20-17.

The Rebels were dominating possession, but committed Kings defence stopped them at every turn. It took an amazing (for Melbourne) eleven-phase play for the Rebels to be able to send Mitch Inman over near the corner flag for their third try, in the 53rd minute. O’Connor converted and the Rebels led by 10, 27-17.

From there, the Kings flicked the switch. Trapping Jarrod Saffy offside at the breakdown, the visitors earned a penalty in front of goal, and Catrakilis made no mistake to reduce the deficit to 7, 27-20 after 56.

The Rebels conceded silly penalties in droves, and each time (bar one) the Kings denied the kick at goal, turning the pressure up a bit more, running at the Rebels and forcing them deep into their own half.

The Rebels lost all focus, and looked like a team preparing to lose. When Jordy Reid was sent off in the 75th minute after repeated tackle infringments, the jig was up. The Kings threw it wide and Wimpie van der Walt touched down to put the Kings within two. Catrakilis continued his great game, tying the scores with his conversion, with mere minutes to go.

Indeed, Catrakilis would prove the hero for the Kings. When the Rebels conceded a scrum on the siren, it was Catrakilis who positioned himself perfectly for the drop goal. He sent it over, and the Kings rejoiced, clearing the benches in jubilation. Their point, you feel, was made. They deserved to be here.

So we ask the question, after another performance devoid of passion, intensity and – importantly – points, do the Rebels?

Jordy Reid‘s 75th minute sending-off proved the nail in the coffin for the Rebels. The Rebels looked to be holding the Kings well, but when Reid walked for a tackle infringement, the extra man led to a try being conceded.

Jason Woodward – almost every backline move hinged on his efforts, and he gave everything he had on the field. A real find for the Rebels.

Scott Higginbotham – has been serviceable, without being spectacular, so far this year, but things are starting to click for the moustached Wallaby forward. He is communicating well with the pack and having more of an impact on games. His line-out work especially has improved.