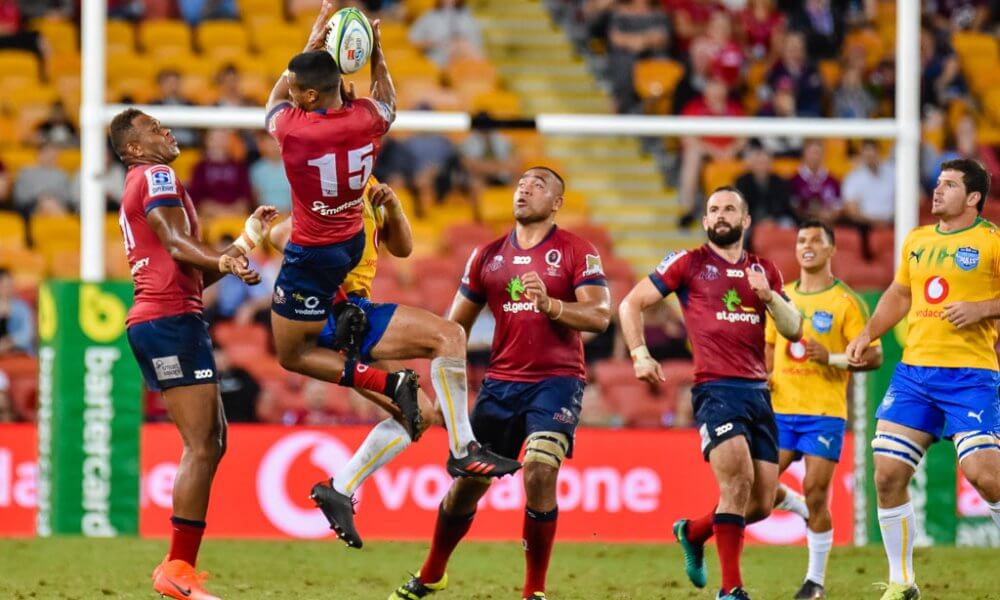 The Reds show up in Buenos Aires with two wins under their belt. They might have been ugly but they are still in the book as wins. Part of me is happy that this trip comes this early in the season. As Sully pointed out the other day, lapping around the world is hard enough without the pressure of playing professional rugby every 7 days while you do it. Even if they only hold the Jaguares out for more than 30 seconds I will call to a win.

The Jaguares clocked up their first win last weekend when they, ahem, burned the Waratahs. This will be their third game in a row at home in a five game stretch, so they were looking to put some more points on the board before an extended trip through Australia and New Zealand.

After a few minutes of the teams feeling each other out the Reds were awarded a penalty when one of the Jaguares players was a little slow to roll away. James Tuttle stepped in to make the score 0-3 after 4 minutes.

The restart was taken cleanly by Jono Lance but it came undone with a forward pass by Samu Kerevi trying to put Chris Feauai-Sautia in some space. From the subsequent scrum, after a few resets, Joaquin Tuculet was put through a yawning gap in the Reds defence and was over under the posts. The try was duly converted by Nicolas Sanchez and the home side was up 7-3 in the 9th minute.

Most of the rest of the first half was spent between the 22’s with both side blowing opportunities with handling errors, both forced and unforced. Eventually, the Reds were awarded a penalty when Tomas Lavanini did a Superman through a ruck just outside the Red’s 22. Lance kicked the hell out of the ball to make touch inside the Jaguares 22. A good 40 plus metre gain!

What followed was successive infringements at lineouts by the Jaguares which drew the Reds back to the same five metre mark four times. The forwards then got sick of having to run, banded together in a huddle and drove Brandon Paenga-Amosa over the line for their first try. Tuttle missed the conversion but the Reds were in the lead 7 – 8 in the 31st minute.

From the restart, the Reds systematically worked their way back up the field assisted by an error at the lineout by the Jaguares. Caleb Timu struggled to get his hands on a Tuttle pass so a scrum was set just inside the Jaguares half. After a chat from the ref about both packs not holding their weight and a reset, the Reds won a penalty when the Jags front row collapsed. Tuttle stepped up and hammered the ball over. 7 – 11 the score.

A few phases after the Jags recovered possession at the restart Angus Scott-Young hit Sanchez. Hard. Really hard. And maybe a touch late. Play continued for a few minutes until Lance kicked the ball into touch and the local broadcaster decided to help the Jaguares out with repeated replays. ASY was then penalised and the Jags got the opportunity to have the final say in the first half.

All came to nought however when first CFS and Lance held Lavaini up over the line and then Kerevi knocked the ball loose in a tackle and it was judged that the Jags had lost the ball forward. The Reds had the lead at halftime 7 – 11 after 42 minutes.
Embed from Getty Images

The second half started as the first half finished – handling errors passing possession back and forth between the two sides. The Reds pack was starting to get the ascendancy in the tight work and this was applying the pressure to the Jags.

After repeated penalties by the Jags, the Reds had a lineout just inside their own half. The throw was taken cleanly and the ball was shifted to Timu who was lurking midfield. He busted through the Jags defensive line and handed the ball off to Kerevi, who passed to CFS who flicked the ball onto Daugunu who showed a turn of speed to be over for the last try of the game. Tuttle added the extras and the Reds were leading 18 – 7.

That was the last time the scorer was woken from his slumber. Late in the game, the Jags looked like they were over the line, three times, in the one passage of play. After seeing the replays everybody other than the TMO thought the first time was a try, but Kerevi must have got his boot under it and we returned for a 5 metre scrum. But, the ball was turned over by the Reds and they got themselves out of trouble. Again.

Last week the Waratahs couldn’t think that they had a way of stopping the Jags. Well, I think they might need to talk to Brad Thorn because the Reds seemed to find a way. Although it may seem that the Jags were their own worst enemies, the Reds defence was largely responsible for forcing many of the errors committed. The Reds made their fair share as well but didn’t seem to lose their cool quite as much.

The game eventually died a death of a thousand knock-ons and the Reds had got their 3rd win in a row. The first time in 5 years!

The Reds defence was the difference in the game. One of the best examples was when Hamish Stewart and Ben Lucas forced Leguizamon into touch preventing him from scoring a try in the 76th minute.

Daugunu takes it for me. For a small fast bloke, he shows good strength in both defence and attack. He is evasive and is starting to look for work all over the park very much in the mould of a young Diggers. Special mentions to Timu and Rodda.

What is Daugunu’s eligibility story? Others to keep an eye on include Douglas who appears to be playing his way back into some form, and you could do worse with Timu as a big busting No. 8.

Preview – Are The Rebels a Force?
REVIEW: Waratahs v Rebels