Before they last met I suggested that the parallels between these two teams were striking. This time there are two fundamental differences – momentum (with Australia) and altitude (with the Springboks).

The Wallabies are coming out of a slump with back to back wins in the Rugby Championship (hardly counts as a “winning streak”). They have now re-acquainted themselves what winning feels like.

We came out of a poor Super Rugby season with time to burn in the Wallabies camp. Then we turned up against the All Blacks with the team appearing listless, tired and over-trained. The return game saw perhaps a touch less enervation but more confusion in the game plan which looked in transition. Much improved (ie periods of actual adequacy!) against the Boks. Sheeted home against the Pumas – it’s starting to look like we have a recognisable game plan.

While many on the G&GR forums are critical with the selections, the run-on team is taking a familiar shape with consistency being offered in most areas (other than injury enforced change) – allowing for combinations and familiarity to slowly build.

The Springboks just squeaked home against the improving Pumas. Concerns over transformation quickly took a back step as Springbok fans asked fundamentals – was there any game plan in play at all? It got worse with the Argentina return game. The mess continued with losses to Australia and New Zealand. Concerns lie with Coetzee not coping with a rugby style clash. His usual preference for a more traditional and conservative South African rugby has not integrated with the rampant Lions’ free running style.

The return of players like Pat Lambie, Morne Steyne and Willie La Roux are expected to assist Coetzee return to type. In front of a close to sold-out Loftus Stadium, this may be the game where we see it. The game is on the Pretoria Highveld at approx. 5,700 feet above sea level. The ball flies differently (further) and visitors tire faster.

It is not a happy hunting ground for the Wallabies who have lost their last six games at this venue. Is it time for Cheika to turn the tide of history? Is it time for Coetzee to succeed with a more conservative rugby in the place where this style has performed so admirably? 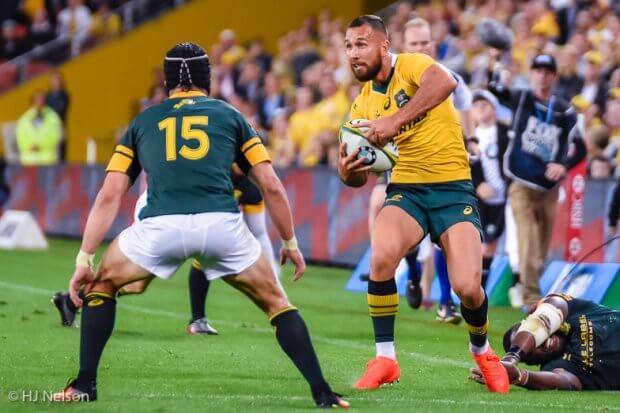 The Wallabies have been in South Africa for a week and are hopefully better acclimatised to the altitude.

The Pooper experiment is over – for now anyway – Pocock is out with a broken hand. This has provided opportunity for McMahon who starts at 8.

For the Boks both Steyne (10) and Lambie (15) have been included suggesting kicking is important. Rudy Paige replaces de Klerk at half with Hougaard remaining on the wing. So we have a new halves pairing and both kicking flyhalfs on the field.

Mick was pretty much the solitary factor universally welcomed in 2016. Brought in for kicking and handling he is now being credited with improvements in the line out and elsewhere. Impressive if true. Our kicking HAS improved. Foley, Hodge and Cooper must all bring their best boots.

The Springboks are frustrated with the absence of an astute tactical kicking game in 2016 – a traditional strength simply demanded by Africans. Ex-Springbok, Louis Koen, has been brought in (from the SARU mobi-unit – a sort of mobile High Performance Unit). He has only had a week, but he is working with Morne Steyne, Willie La Roux and Pat Lambie (also De Klerk and Jantjies). Expect the kicking performance to be much improved at Loftus.

The Line Outs: The Wallaby line out against Argentina finally looked like there are professionals involved. <Hallelujah> Unfortunately the Argentine jumpers were missing a lock and are somewhat short for international rugby. Not a bad hit-out but let’s not get too cocky. Etzebeth in particular embarrassed the Wallaby jumpers in Brisbane. Whitely, De Jager and du Toit are also line out kings. Coleman, Simmons, and Mumm will be doing very well to get anywhere near close to parity.

The 10-12 Channel: Either Lambie or Steyne will increase the targeting of the Wallaby defence in tight and through the centres. The Wallaby organisational shift between attack and defence will be targeted. With or without that, Cooper and Foley can expect a busy night as bullocking Saffers are straightened and line them up.

Coleman and Etzebeth: Both locks are used as enforcers and both have overdone it with cards to their names. Ten minutes short-handed at Loftus will suck out a lot of life (from the legs of the remaining 14) than at sea level in Brisbane. Add Quade to that list. In fact add the whole Wallaby team who are the most penalised team in the Rugby Championship. If it continues it will be costly at Loftus. 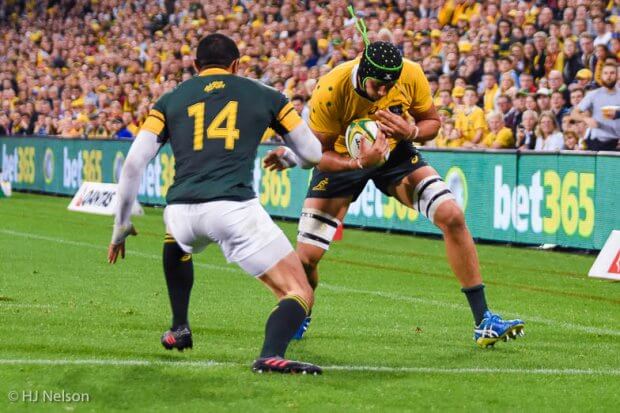 The Wallaby game plan is definitely maturing. The coaching squad is looking much more together than it did at the start of the Rugby Championship. This might be Larkham and Gray doing better. It might be the influence of Byrne. Or maybe Cheika has pulled them together. Who cares, long may it continue.

We are seeing more import on the line out. Simmons impact at the rucks (as shown by the fabulous ruck analysis by Force Fan) is low, but he’s not uninvolved and had good tackles and runs. It wouldn’t work without Coleman though who is now our key lock. More work form the front row would be nice.

Forwards must hold parity and push the gain line. Genia has been fundamental to this. It allows the “double 10” in Foley and Cooper to release the backs. Our 22 exits are much improved. Kicking must continue to improve but the Wallaby strike back on the counter could turn events. Hodges long distance boot is something worth waiting for.

Coetzee’s game plan is anticipated to return to type – 10 man rugby with 12 straightening up the attack. Wide boys on the kick chase and counter. Interrupt the rucks and slow the play. Kick the penalties from all over the park. A score board in increments of 3. Very effective at Loftus.

Southern Hemisphere rugby requires the Springboks to step up (and for the Wallabies to continue their upward trajectory). The bookies suggest this test is the Springboks with a 3.5 point margin.

Thanks to Tangawizi on the game forum: “Are we still undefeated in Tests with Wayne Barnes as ref? Aren’t we 8-0 with him now? That’s a bigger streak than 0-6 in Pretoria so we must be due for a win there.”

It’s all the excuse I need, Wallabies by 3 points. 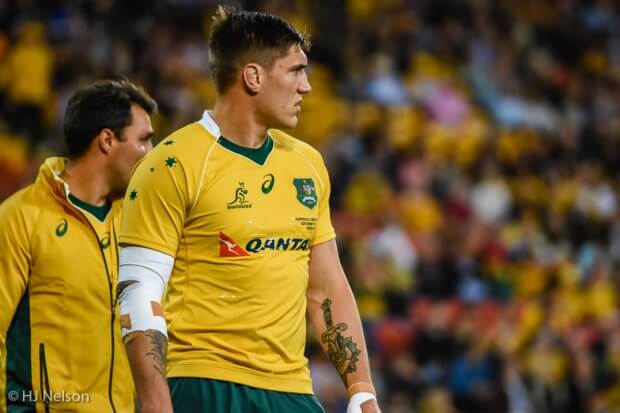