The Waratahs’ season will be on the line when they play the Cheetahs in Bloemfontein on Saturday night.

They have to stay ahead of the Brumbies in the Australian Conference and whatever that team does in the last two games, the Tahs have to do also—at least.

The Waratahs are level on season points with the Brumbies, but are ahead of them in the standings because of a count back—the number of games won. The Brumbies are on the same step of the ladder because they have scored four more bonus points than the Sydney mob.

And a mob is what the Waratahs have been in their last two games. 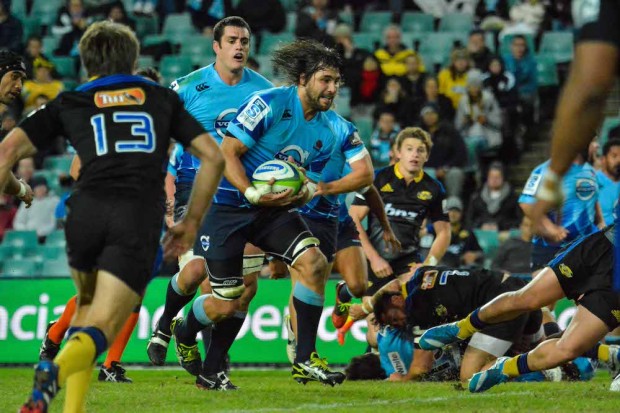 Their recent aggression has been good to see but not the manner in which it has been applied. Tolu Latu was carded against the Crusaders for a lifting tackle and Will Skelton was lucky to stay on the park for his part in it.

Both were cited and received bans, but instead of learning from that, the Waratahs continued their bonehead antics against the Lions last week. Rob Horne, of all people, was carded, cited and banned for the same “uplifting” reason, and reserve Jacques Potgieter went to the sin-bin for a shoulder charge. The Lions scored 20 of their 27 points against 14 men.

It was not all roses for the Tahs when they had a full side either. They were bossed in the scrums, and being 50 kgs lighter than they had been with their top scrum on board was no excuse, because the Lions’ pack was no heavier.

The Waratahs let the Lions control the skies, when the locals weren’t kicking the ball out on the full, and they let them take the outside break time and time again. Nor did the Tahs counter-ruck as well as their opponents did.

For the Cheetahs’ game Matt Carraro replaces Horne on the wing and Jacques Potgieter comes in for Stephen Hoiles on the blindside flank.

They were poor against the Stormers’ last week because the only thing they had going for them was their driving maul. They played only one third of the match in Stormers’ territory and had about the same share of possession.

The Cheetahs were belted in the scrums and are not the Orange Crush anymore. The Tahs should handle them well provided they improve their timing of the hit.

Apart from their wingers, who are finishers, they lack rain makers in the backs when Willie le Roux is absent.

New coach Franco Smith has made seven changes to his matchday squad and named two starting debutants in the key eighthman and flyhalf positions. This should not help them too much except for their getting experience for next year. 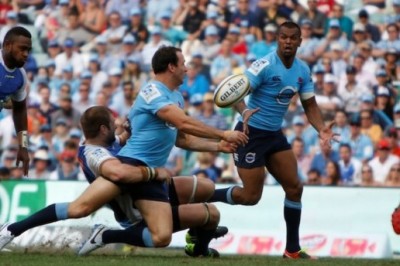 Matt Carraro (L) – will need all his experience to handle Petersen.

Matt Carraro v. Sergeal Petersen
Carraro replaces the suspended Horne on the right wing and his direct opponent will be ex-sprinter Petersen. He will need all his experience to corral the speedster and be careful not to offer him the outside break near touch because he could be embarrassed.

The Tahs were not great against the outside break last week, even with 15 men.

Halves v. Halves
The Waratahs’ halves pairing of Wallabies 9. Nick Phipps and 10. Bernard Foley should have too much going for them compared to the new combination of sniper Sarel Pretorius, the ex-Waratah scrum half, and debutant flyhalf Niel Marais, who was chosen to start ahead of experienced Joe Pietersen.

If the Tahs’ halves can turn that on-paper advantage into points on the grass it should help them to get the four-try bonus victory they will crave. But as it is with other rugby functions: it will be the execution that will be vital.

Ex-Waratah Sarel Pretorius playing against his current club in 2012

Coach v Coach
New coach Franco Smith wants his Cheetahs to have fun and there will be no greater enjoyment than playing out of their skins to impress him, and winning the match. Since they have won the last three games against the Tahs despite bad odds, it is not as strange as it sounds.

Michael Cheika’s challenge is to get his Tahs to channel the aggression without losing men to the bin or having them cited. And truth be told—he has had a decent run with being able to use most of his squad; let’s see how he handles a share of losing key players.

The Cheetahs are comfortably the last team in the South African Conference and have won only two of their last twelve matches.

The Waratahs are in denial about their recent roughhouse rugby but surely they will see the light and use their aggression sensibly.

Video: Anatomy of a Try Crombrink vs Waratahs 2015
Brumbies roll over the Force