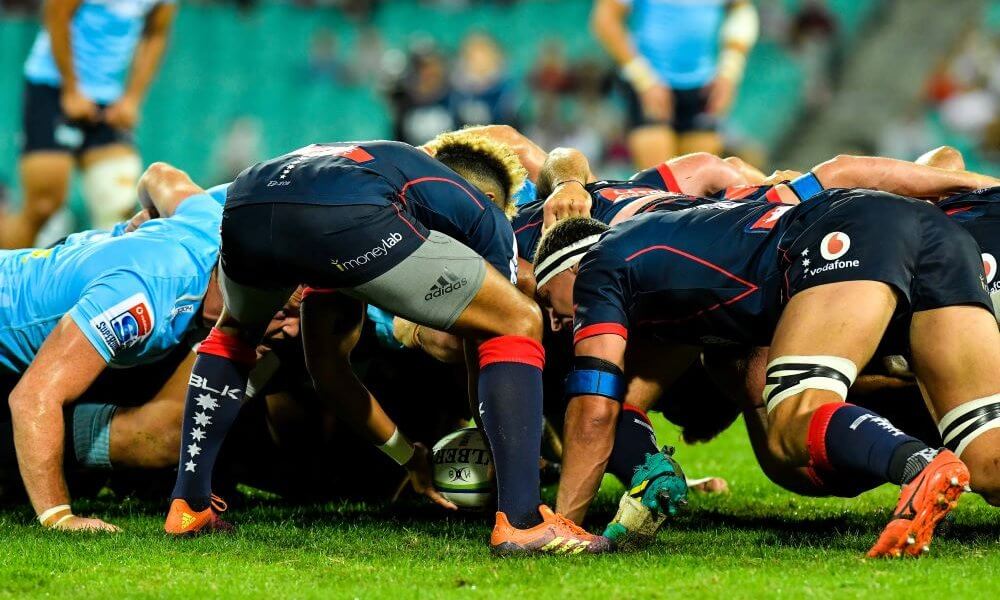 Confirming the absense of this article for the last couple of weeks is in no way an indicator that I am actually Israel Folau writing under a pseudonym about his secrtet love of scrums. I can assure you it’s just me back after a short break and keen to get back into our scrum watch!

The Waratahs were assaulted all across the ground against the Sharks at the New Bankwest Stadium in Western Sydney with the resulting score 23-15 to the Sharks. The Waratahs started with the consistent front row of Harry Johnson-Holmes, Damien Fitzpatrick and Sekopu Kepu. The Sharks were coming of the loss at home to the Reds in Durban starting with Tendai Mtawarira, Kerron van Vuuren and Thomas Du Toit.

The game only chalked up 3 scrums a piece but the Sharks managed to get the rub with free kicks and penalties for indiscretions in the scrum through the 2nd half but all in all the Waratahs scrum held up against a tough Sharks opposition.

I think the Waratahs front row played well considering the pressure on the team currently. Johnson – Holmes had 12 tackles for 13 runs in the game, 1 behind Hooper. Fitzpatrick made 15 tackles with 7 runs and Kepu made 7 tackles for 5 runs. The front rowers are up there or above with the carries the back five are completing. HJH is consistently putting his hand up week in and out and does not look out of place in this team considering the injuries they had at the start of the year with Vui and Robertson.  His scrumming is improving but needs to have the consistency we are seeing with some other looseheads within the Australian setup.  Considering the amount of work he gets through around the park, this is a tough balancing act depending on the style of play the Waratahs have been directed in.

Fitzpatrick is one thing and that is consistent. I’ve seen him in previous years as a link man running wide at times as the man has great handling skills but the Waratahs are not utilising this strength this year. This could also be a result of the Waratahs lack of breaking the defensive line where he pops up as the link man.  He consistently makes a tonne of tackles which you expect but his carries are an area of improvement that needs tweaking to see him in the Australian set up as well as some bulk to ensure his getting across the gain line. Fitzpatrick had an off night with his throw but performed well in the scrum.

Kepu seems to have found his stride in locking down his side of the scrum and involvement around the ground is positive but in a game such as the one against the sharks he should have been sharing his load of carries with HJH and leading from the front. Kepu hasn’t had the luxury of having weeks starting off the bench such as other teams so have to give him credit with his form improvement throughout the rounds but with the writing on the wall for the Waratahs, the question is whether they will give him some rest considering the long year ahead.

Let’s discuss the Elephant in the room and mention Thomas Du Toits reaction to copping an elbow for holding onto Jed Holloways Jersey. I have witnessed people knocked out from copping the slightest hit on the jaw, etc but to react the way Du Toit did was embarrassing for a front rower and rugby in general. Yes it was a red for Holloway but these players hit harder in warm up and is not in the interest of the game to milk these penalties. I would have preferred he was yellowed for milking the penalty as opposed to holding onto the jersey. Has this set a precedent for future jersey pulling as we see in every game?

It was also the return of Tolu Latu after his suspension and straight off the bat he makes me nervous whenever he goes for the pilfer. I’m unsure on his success rate but he needs to pick and choose his rucks a little better as he is borderline on his knees every ruck and will give away penalties when the Waratahs are not in a position to give them away. I think his a liability in this area of the game and should look to pick his moments. The scrums and lineouts are strength for Latu and warrant his inclusion in the team but he needs to clean up the 50/50 penalties if he is to be selected in the Wallabies.

Fitzpatrick had an off night hitting the mark with the resulting ball being overthrown on attack within the 22 giving the Sharks possession back twice. Watching the second throw the Sharks had marked up well on the front and back lifter but the call was made to the back giving Fitzpatrick inches to hit the mark and was not identified by the Waratahs. This was costly considering the amount of attacking opportunities the Waratahs had and needs to be identified earlier to make the correct call to ensure attacking ball is utilised. The Waratahs did win 17 of their lineouts to the Sharks 14 however credit must be given to the defence of the Waratahs winning 3 Shark lineouts.

Tough night for the Waratahs with a very physical team holding up the players all across the field and the Sharks seemed to lift another gear when the front row replacements were made of Rory O’connor, Latu and Chris Talakai. After Talakai was extremely unlucky not to ground the ball over the line resulted in a frustrating sequence of penalties given away by the Sharks. This should have resulted in a yellow card but after a number of resets and a collapsed scrum, the Sharks were awarded a penalty and given a free exit from the 5 meter scrum.

My outstanding scrum is difficult to interpret with what the referee was basing his decision on so I thought I would put it up for discussion. I think both teams apply pressure but the Sharks do a better job after they have come around the corner to show that they were going up the field as well as the number 8 being the only player to stay square on the scrum. Latu does pop out of the scrum first but I would consider this a reset due to the wheel from both teams not a penalty.

I’m not sure what the Brumbies forwards could have done more in the set piece to supply the backline with attacking ball winning 9 scrums, 19 lineouts and 3 lineouts against the Jaguares throw.  The Jaguares only had 3 scrum wins and 6 lineouts in the game but managed to claw a victory with some opportunistic tries.

The game did start off with good attacking ball and a lineout in the 22. Fainga’a looping around off a lineout with an inside switch to Henry Speight who ends up knocking the ball on. The Jaguares then score an 80 meter try resulting from this one missed pass which could also have resulted in points to the Brumbies as there was a substantial gap for Speight to run through. Fainga’a made up minutes later with a lineout 10 meters out from the try line hitting Arnold and 7A’s running around the front of the lineout hitting Fainga’a down the tram tracks, steam rolling over 3 defenders to score.  Fainga’a does have this strength over other Hookers in the Australian teams of being able to carry the ball in these tight spaces and deliver the goods.

The Brumbies managed to piggy back up the field a little later due to a Brumbies scrum that had 7A’s drive straight through Chaparro and earn a penalty. After a knock on by Slipper resulting from the attacking lineout, the Brumbies were awarded a short arm from early engagement from the Jaguares. The Brumbies called for another scrum which they locked down once Medrano could hold his side up and laid the platform for Tom Banks to outpace his opposite and score in the corner. It was excellent to watch the Brumbies back their scrum and collect 5 points as a result.

The scrums throughout the game were contested well from both teams with the Jaguares using a pincer method on the Brumbies scrum below with both loosehead and tighthead aiming in on Fainga’a applying a huge amount of pressure through the scrum. What is evident is the pressure coming from the back five of the scrum resulting in the front rows getting driven out and up but Samu manages to pull the ball out and get it away.

The 3 starting front rowers all had good games and the defence around the 50 minute mark from 7A’s and Fainga’a solidifies there position in the Wallabies. Fainga’a getting another well-earned try and 7A’s a try assist and the number of carries they complete each game doesn’t seem to be effecting their set piece. James Slipper managed his side of the scrum well and locked it down when the Jaguares didn’t collapse. Scott Sio also had this problem early on with trying to maintain to keep his side square with the Jaguares targeting him and using angles to drive through Fainga’a on the loosehead side but this is the reality of the Jaguares aggression and utilised it in defence of the rolling maul which was well contained by the South Americans.

The outstanding scrum was the Brumbies earning a penalty with Slipper working hard on his opposite and 7A’s driving through Chaparro and Creevy demolishing the Jaguares. This set the platform for the resulting Banks 1st try.

With all the talk of not having depth in Hookers, I think  Folau Fainga’a is clearly heads above all contenders. A sloppy pass and a miss throw were his only discretions but his strong carry to score over three defenders, his tackling is getting better every game and hitting with venom. Props to Folau Fainga’a.