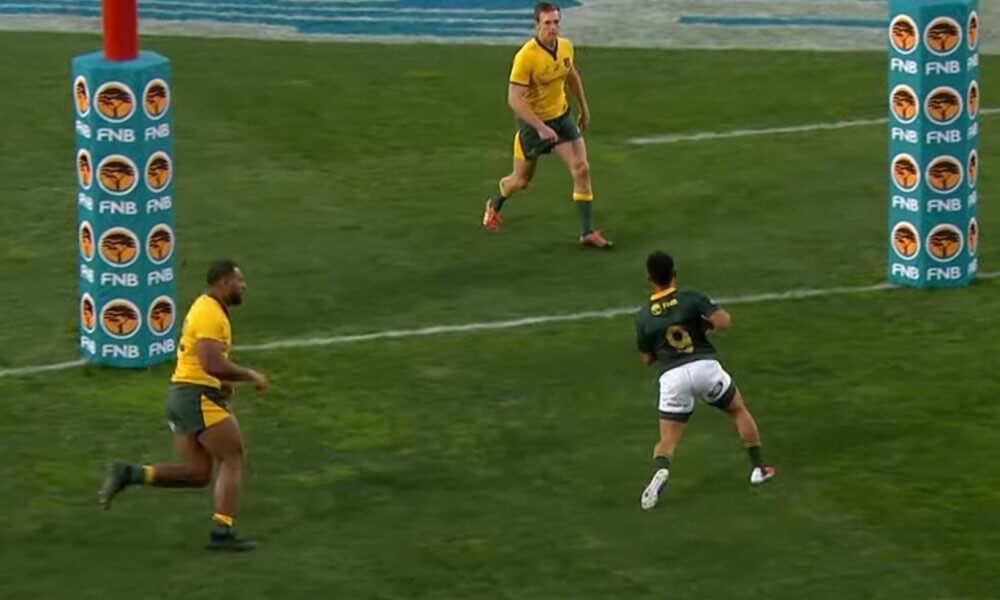 In recent times much has been made about the Wallabies and their traditional playmakers at numbers 10 and 12. However, with the World Cup fast approaching it might be more appropriate to look at the playmaking ability of the number 9s.

Over the weekend all of the scrum halves in The Rugby Championship played a major hand in their team’s attack. It seems attacking shape and structure is so last season and playing direct off the playmaker halfback is so now. Here are a few clips to illustrate the impact the 9s had in the two Test Matches.

The 23 year old Herschal Jantjies from the Stormers made a stunning test debut scoring two excellent tries both featured below.

For the first try he passed to the overloaded Springbok’s right edge and supported the linebreak running a perfect scrum half support line. His second effort was a sneaky scoot down the blind side. A perfect eyes up play that paid off handsomely. Both tries suggest the Springboks have plenty of depth at scrum half.

Remember there are already 15 Springboks in New Zealand preparing for their next contest. In effect this was a back up Springbok team.

Both Wallaby halfbacks also had an impact on their team’s much anticipated new attack strategy.

First it was Nick White launching Samu Kerevi off the back of a Wallaby maul before getting a return offload in order to link up with the Wallaby outside backs. This direct play off the playmaker halfback was replicated again later in the match with Will Genia getting a great pop ball from Matt To’omua, allowing him to launch Kurtley Beale through the scrambling Springbok defence line. Beale’s offload is a screamer, one for the ages.

The Wallabies will be very pleased with the outcome of their new attacking strategy. It’s very much like the way Eddie Jones and his England team played early in his tenure.

In Buenos Aires the All Blacks rested a number of Crusaders players but Aaron Smith from the Highlanders played and left his mark on this Test Match. Usually teams winning a penalty close to the opposition try line slow things down and opt for a lineout or scrum.

However, the Crusaders and now the All Blacks are choosing to pile on the pressure via lifting the tempo. Clearly their halfbacks have licence to tap and go in these situations. Against the Pumas, Aaron Smith makes a brave but good decision to tap and the rampaging 22 year old from the Hurricanes, Ngani Laumape gets the job done.

It would appear that the traditional Wallaby backline including ball players at number 10 and 12 is a thing of the past. The ball playing 12 has been replaced by a power centre with the halfback now expected to be a running playmaker. The attack strategy appears to be shifting away from using shape and structure to create opportunities.

Instead the Wallabies are looking to be more direct off a playmaking halfback before they release the ball to the edges. There were promising signs that the new attack plan was effective in Johannesburg. It will be interesting to see if they can build on their last attacking effort when they face the Pumas in Brisbane.