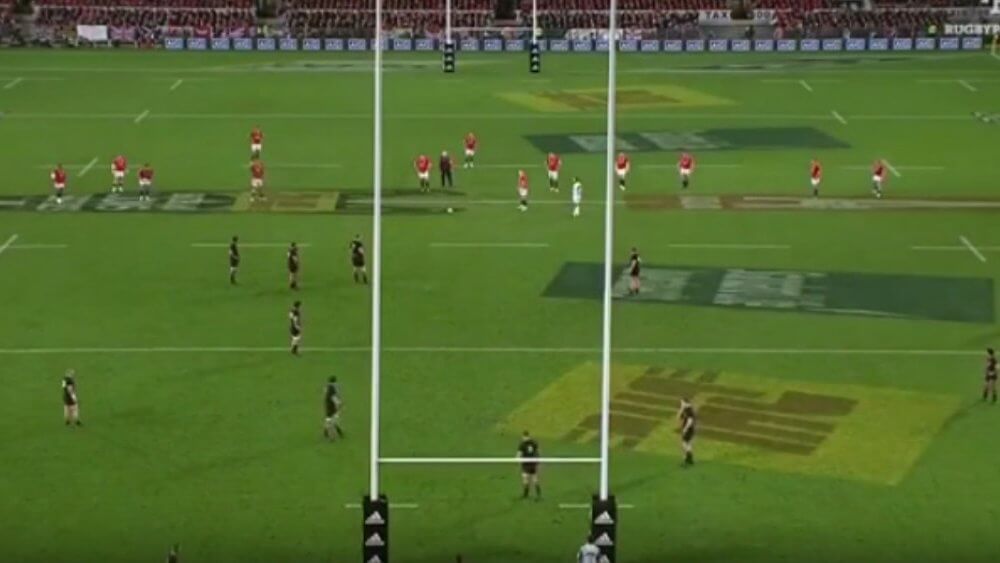 Owen Farrell’s trusted right foot is one of the main reasons Warren Gatland’s Lions have been a success on this New Zealand Tour. And behind the nerves of steel? The trusty technique inspired by the great Jonny Wilkinson.

To be fair, Owen Farrell has excellent pedigree as his father Andy was a rugby league legend for Wigan and Great Britain. Andy was a goal kicking back rower in the Super League and made the switch to rugby for the 2007 Rugby World Cup. Injury forced him into early retirement and we did not see the best of him in rugby union.

However, the former player who’s inspired Owen Farrell and is now overseeing his goal kicking technique is the little maestro himself – Jonny Wilkinson. Have a look at these two clips. The Lions players will be calling Owen Farrell the “Mailman” as they celebrate a series draw against the back to back World Champion All Blacks. Note the composure under extreme pressure.

The first clip shows Farrell banging over a pressure penalty from 45m to bring the Lions all square with the All Blacks at 12 v 12. This is high pressure stuff for a 25-year-old with the hopes of 60 million Lions fans weighing on his shoulders. In the second clip, he’s kicking to draw level at 15-15 and once again his nerve and technique hold up under enormous pressure.

There was a lot more to the Lions game than Owen Farrell’s boot. Warren Gatland’s charges definitely grew as an attacking force throughout the series. The Wales coach should be congratulated for being the first Lions coach since the great Carwyn James (1971) to rattle the All Blacks cage. It would seem that he too has grown a lot on this tour, and he’s been prepared to embrace a new way of playing.

A Work In Progress

The other number 10 in this Lions series is Beauden Barrett.

He’s had a fantastic series with ball in hand, but his goal kicking has probably cost his side a series victory. His creativity and skill set have entertained us and, had it not been for his play making ability, it could be argued the All Blacks would not have scored so many memorable tries.

Going into the series Beauden Barrett was being touted in New Zealand as the best player in the world. His attacking instincts have lived up to the billing as these clips will illustrate.

The first try from the All Blacks came from some clever play from Barrett, as he chipped a cross kick to his brother Jordie as play rolled on under a penalty advantage. It was an effective tactic used a number of times in the game to break up the heavy-blitzing Lions defence.

The next try was a peach, thanks to a flat pass on the gain line from Beauden Barrett to Ngani Laumape. Laumape then popped a brilliant offload to Anton Lienert-Brown, who in turn fired a perfectly timed pass to Jordie Barrett, to give the younger Barrett a try on his debut. Note the accuracy of the backline play.

Throughout the series Beauden Barrett has been a brilliant attacking force, and his skill set and athleticism have been inspiring. He’s the sort of ball player the next generation of ball players will aspire to play like.

For me the turning point in the game and the series came just after half time with the Lions trailing 12-9.

New Zealand won a kickable penalty and decided to kick to the corner looking for 7 points instead of taking 3. This was a bold move. but it ended up biting the All Blacks as they failed to capitalise from the lineout drive on the Lions try line.

Had Beauden Barrett been confident enough, I’m sure he would have told his captain he wanted to take the penalty kick. However, he’d already shanked a straight forward penalty and a conversion attempt in the first half so he was keen to put the ball in the corner.

The following two clips show the turning point in the game in my view:

The line kick turned out to be a beauty as you can see. Unfortunately, the All Blacks then failed to execute in this attacking raid and a near certain 3 points (with a confident kicker) were fritted away.

It’s a lesson to coaches, captains and all players: take the points when they’re on offer in a clutch situation.

To be fair, the All Blacks had a red hot crack from this drive. Israel Dagg and Laumape shortened the Lions defensive line, creating space for Jordie Barrett and Julian Savea. A try was only prevented by Lions’ back Liam Williams pressuring Jordie Barrett.

For those of you interested in goal kicking, here are 3 of Beauden Barrett’s kicks in sequence.

His first penalty kick came early in the match and he pulls this one, as you can see. His technique is poor; did not kick through the ball.

His next kick is this conversion attempt from the right touch line, and he gets his body weight through this one.

It’s a perfect kick, aimed at the right hand post allowing for the natural draw from right to left.

This next kick is the conversion attempt of his brother’s try just before half time. He lines this kick up at the right hand post but kicks across the ball and he again pulls it left.

In cricket they say that “catches win matches”, the same can be said for goal kicking in our game. It’s a shame that so much responsibility should be put on the shoulders of one player, but goal kickers understand this and they generally thrive on the opportunity to step up on the big occasions.

The All Blacks will feel a wee bit robbed in this series.

They got off to a flying start in the first Test winning convincingly (30-15). They had to play the 2nd Test with 14 men for most of the match, and were pipped at the post (21-24). Beauden Barrett only kicked 7 from 10 in this match and the 3 misses were pretty straight forward for any international kicker. In the final Test they led at half-time, scoring 2 tries to none but again leaving points on the pitch due to more kicking wobbles.

It must be remembered the Lions only led on the scoreboard for 3 minutes throughout the entire series.

However, this statistic does not reflect the attacking attitude and the fighting spirit displayed by the Lions. They have made many friends in New Zealand with this approach, and we should applaud them for their efforts after a long European season. They have shown the world that the All Blacks are beatable, something which hasn’t been the case for a while.

Let’s hope our Wallabies have been taking notes throughout the Lions series.