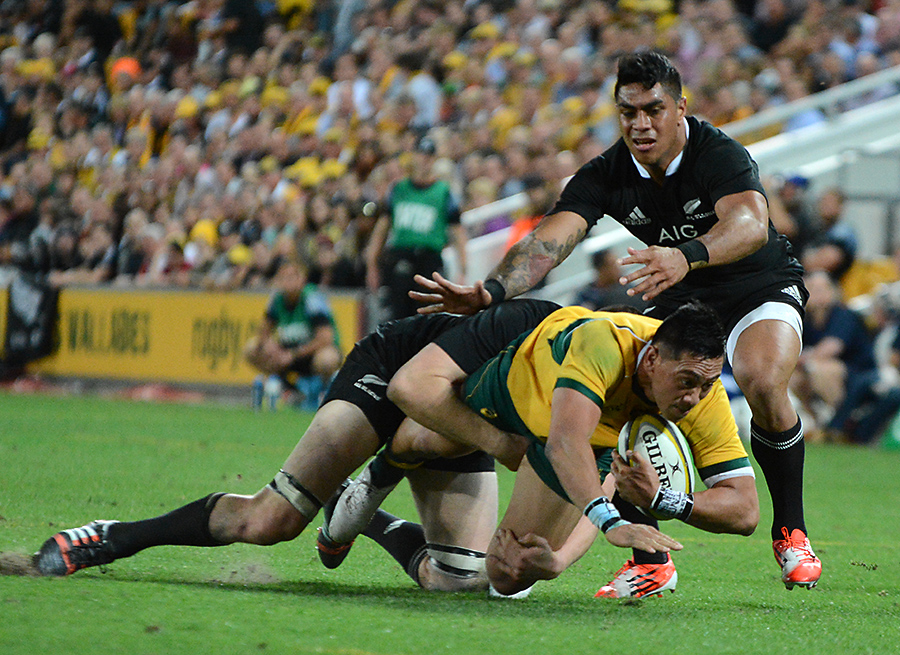 Remember the Bledisloe game in Brisbane?

It seems so long ago now. We were so young, so carefree, so completely unaware of the hell that was about to break loose.

I re-watched the game today, and it picked up my mood considerably. The end result was the wrong one but we played our best rugby of the year. It was fast, skilful and physical, made all the better considering the turbulent week and the situation behind closed doors. Just watch the period between the 35th and 45th minute- it doesn’t get much better than that.

We were over-run physically in the last ten minutes, showing once again our issues with the bench. Forget Nic White, the problems came thanks to weak hit-ups and passive defence in those closing stages.

Apart from a few questionable scrum penalties he was perfect. Ran like a wounded bull, tackled like a… um… wounded bull. I’m erring on the high side with his rating due to his sustained excellence throughout the International season. What a legend. 9

Continued his run of very solid form. He probably doesn’t have the class of a Moore or Polota-Nau but the job he has done in these past three tests has been nothing short of outstanding. Has barely put a foot wrong. 7

I’ve used the term ‘unsung hero’ with this bloke about a thousand times and I may have to do it again. Held up the scrum well, took a number of powerful hit-ups and made all of his tackles. He is in career best form. 8

It was the Carter performance we are too used to seeing- big on activity, light on effectiveness. Made plenty of tackles and a number of runs, but he looked cumbersome. He was badly exposed on both of the All Blacks first half tries. We needed more. 4

Looked like he was struggling for fitness. His stats don’t make for great reading, especially considering he was out there for the full 80- lowest in the pack for runs and rucks hit, and second lowest in the tackle count. Lineout was OK but we never threatened to steal one of theirs. A step backwards. 4

Looks to have finally regathered the form of 2013. Took a couple of great steals, and bobbed up when we really needed him in attack. Tightened his grasp on the six jersey for the World Cup. 7

Just worked all day, as always. Had 16 runs and 9 tackles, as well as a nice pilfer in the second half. Captaincy left a bit to be desired though- don’t think it really hurt us on the field, but he did nothing to silence critics who say he isn’t mature enough for the role. 7

Probably his best game in Wallaby gold. Had a number of nice carries, though I would like to see him get through a little bit more work in defence and at the ruck. He was perfectly suited to the style of game we were trying to play. 7

Like Higgers this was the best I have seen him at test level. Didn’t throw a bad pass, and he had us playing at an unbelievable pace. Orchestrated our first two tries, the second with a bullet-like flat pass to Higgers. Put his hand up at the perfect time. 8

Looked very much at home playing close to the gain line with lightning fast ball. He commanded the backline with aplomb, and can take a lot of credit for the dominant performance put in by the centre pairing. Missed tackle at the end on Fekitoa was brutal, and while you can’t blame him for the try his defence still needs to improve. 7

Probably the best we have seen from him this year. Had plenty of space and he made a number of nice runs, breaking a heap of tackles. Dropped a few balls early but made up for that as the game went on. 7

Where did this come from? He’s been a squaddie for the whole campaign, and has only had a few average NRC efforts to show for himself since a middling Super campaign. But he played like a demon. Flawless in defence, brilliant with ball in hand, creating space for Kuridrani and Folau. The best performance at 12 we’ve seen all year, can he keep it up? 8

Brought up his century in typical AAC fashion, with a solid performance that never let the side down. Made plenty of nice runs and scored a well-taken try. You wouldn’t want it any other way. 7

A good return to form. He topped the run count and beat plenty of defenders. His half-breaks set up two of our three tries. Like Foley he was suited to our fast and wide style, and hope we can see more of it. 7

Played the last 10, and did OK. Would have liked to see a strong carry when the heat was on, though. 5

Like Mann-Rea, didn’t do much wrong in his fifteen minutes. 5

Coughed up a tough pass from Foley, but made a few runs in the closing minutes. He’s no Kepu, though. 5

Had 17 minutes, and probably didn’t do enough. Gave away a soft penalty, and only had one run of note. Needed more from him in the last ten. 4

He’s the people’s favourite, but like Horwill I think we needed more. Made one nice pilfer but only touched the ball twice in his 20 minutes. Lacks the all-over impact that Hooper provides. 4

Picked up where Phipps left off and put in a good closing effort. The box kick was poor but the blame for that lies with the forwards who couldn’t get us out of our own 22, getting the ball flat-footed and being monstered in contact. 6