The Anatomy of a Try – Sean Waniui vs Highlanders 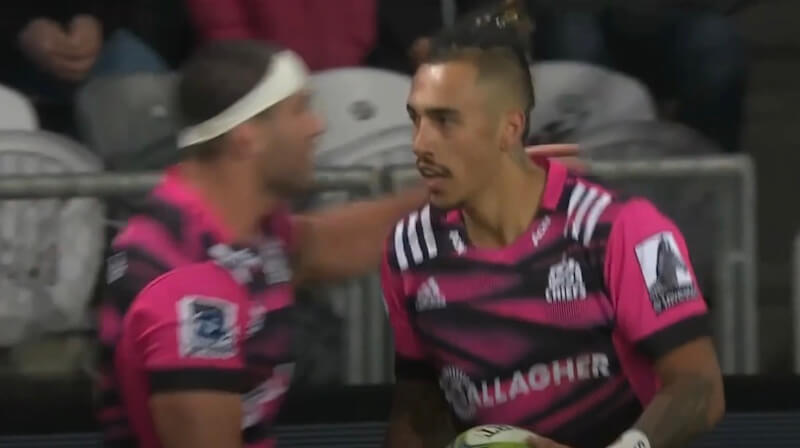 The Anatomy of a Try – Sean Waniui vs Highlanders

Welcome back Rugby. We’ve missed you. I guess it was only fitting that the Country that managed to get back up and running again first was New Zealand I mean they literally lead the way on every other aspect of the sport, so why not this?

The result was two superb games of Rugby. Error strewn? Yes. Penalty rich? Also a yes. But within all that we saw everything the sport has to offer.

The Simplicity of Rugby

Take this try by Sean Wainui. It’s the simplest of Rugby executed at pace and cleanly, a two phase strike move and a clean run in.

It looks like schoolboy Rugby, but against a modern day professional defence it has to be more than that right? Well, the move starts entirely from the set up.

The Chiefs split with a  4 2 overload on the left. The idea is that they thin out this near side with the intent of giving Mckenzie and Stevenson a run into Space. 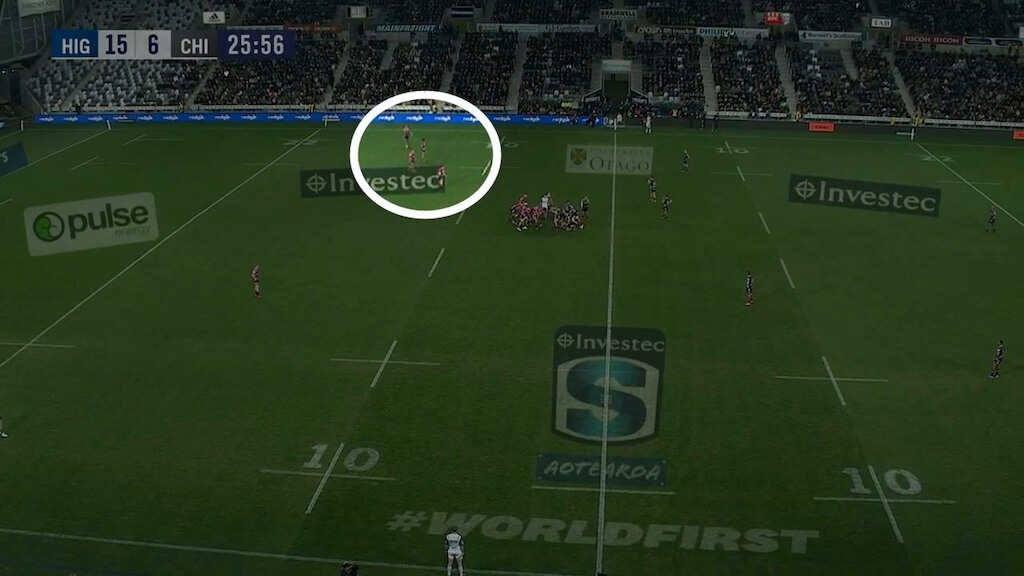 Highlanders have gone for a 3 2 split with Koroi floating able to track the ball. 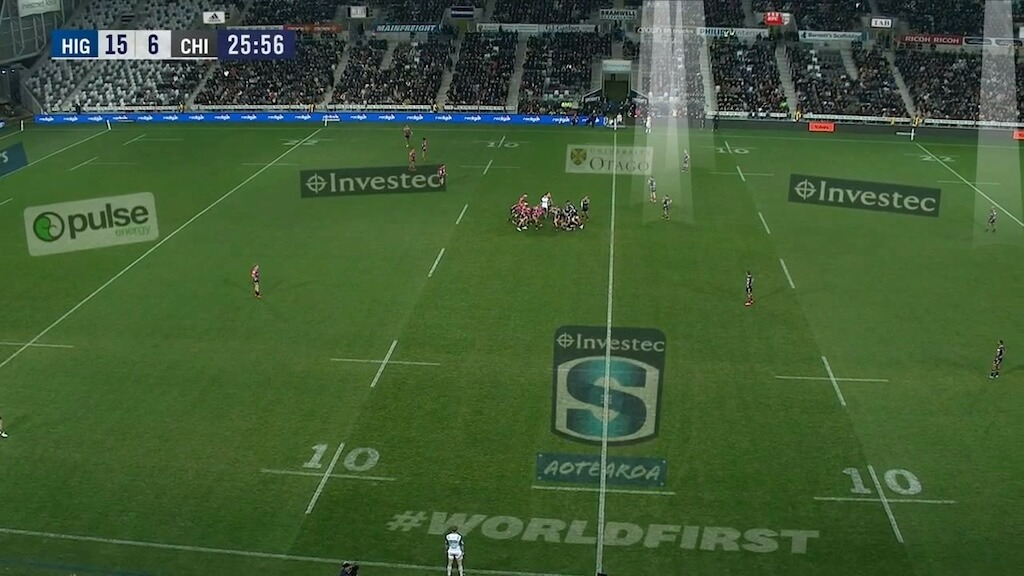 That’s fine the problem is, as we’ll see when this plays out, he’s not in the front line and thus is only really shepherding a kick

So really key to stopping this move is Aaron Smith (kind of).

Smith is on the far side of the scrum with the flow of the ball moving away from him and thus taking him out of the defensive equation – we’ll see him try to address that but it’s simple he’s never in a position to affect the attacking side. 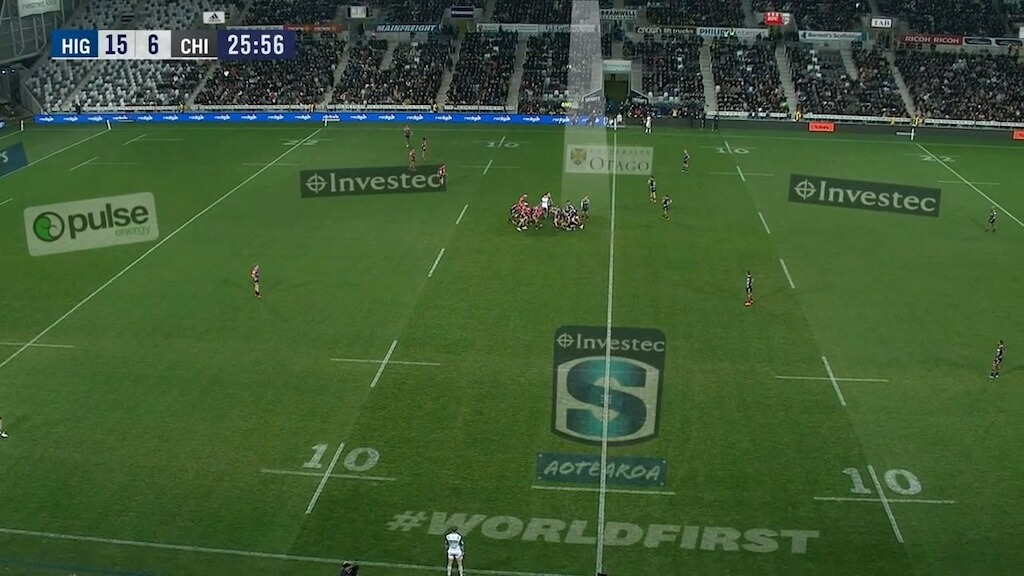 For me a better set up would have been a 3-3 split. If they’d agreed that Smith can make the extra man once the ball is in and covering the far side should they go blind then that would have allowed them to run a 3 man line on this side and Koroi free to track either side behind.

Ball goes in, it’s channel 1 ball and we see Smith drop in behind the Scrum to cover both directions.

Sowakula picks and goes and drags Hunt and Smith with him, with Weber tracking on his shoulder.

Now key here is Sowakula doesn’t just draw and pass, he attacks Smiths outside which means he can’t instantly just push out and has to hold – this is enough to allow weber to get at Smith’s outside shoulder at full pace.

This means he’s always in control and can ride Smith challenge with his fend. 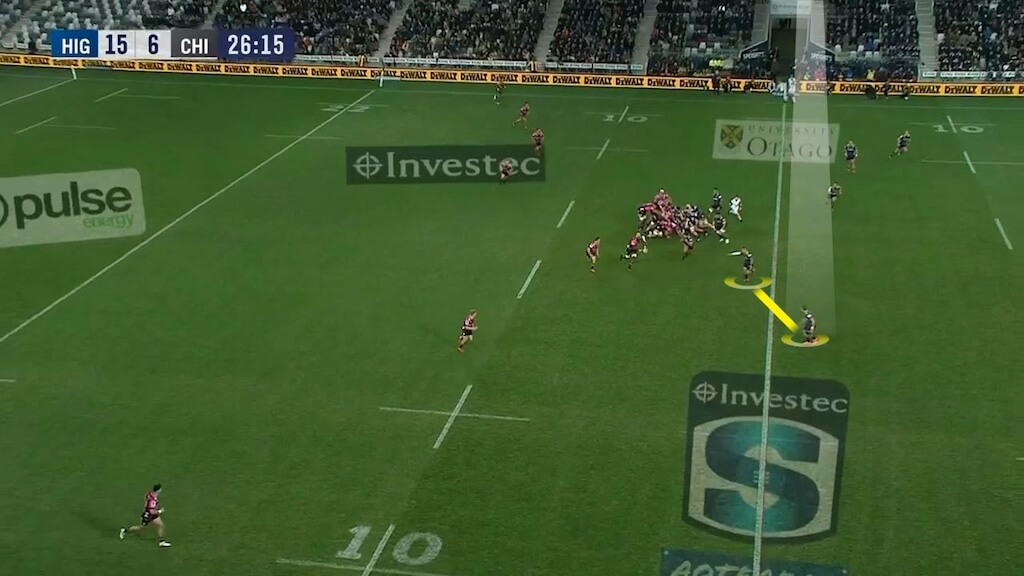 This allows him to get in behind Tomkinson who has had to hold until it’s too late and can’t can’t push onto Mckenzie.

That in turn means Mckenzie can also get in behind the Highlanders tackle line. 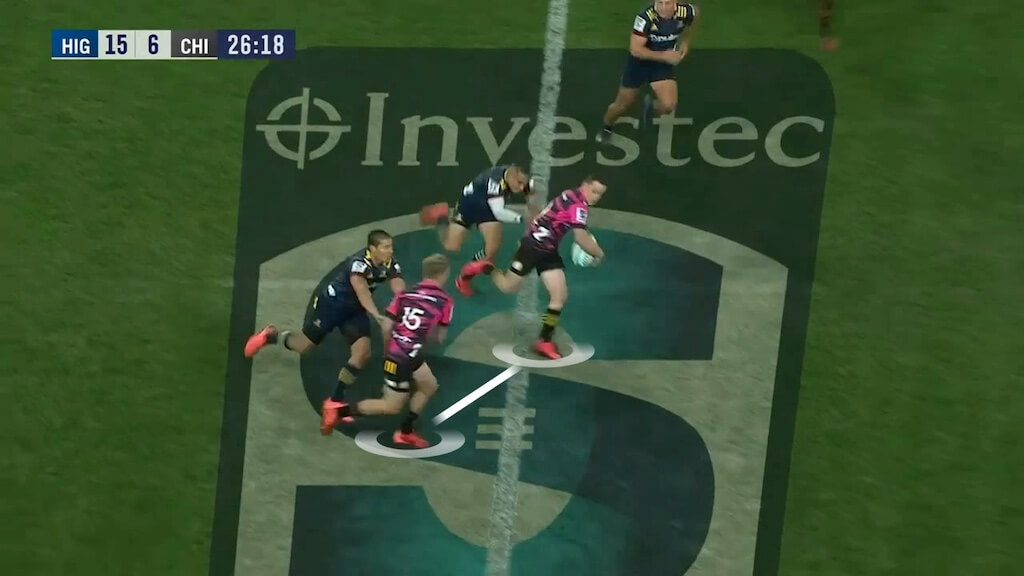 Nareki is beaten and It’s a great Effort by Hunt to chase down Stevenson. Koroi also shadowing him across.

But what we can see here is the Highlanders have had to commit key resources into shutting this attack down. 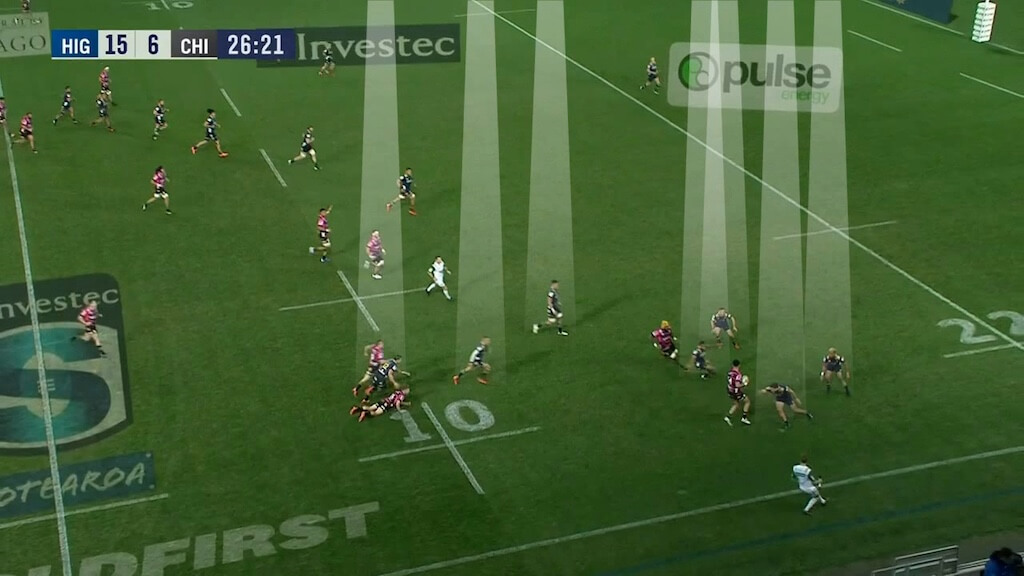 We have Koroi, Hunt, Nareki, Smith, Hunt (Mitch), Tuú and Tomkinson all in and around the 15m on this near side.

And what that means is the Highlanders now have to build their defensive line using these tight 5 players retreating. 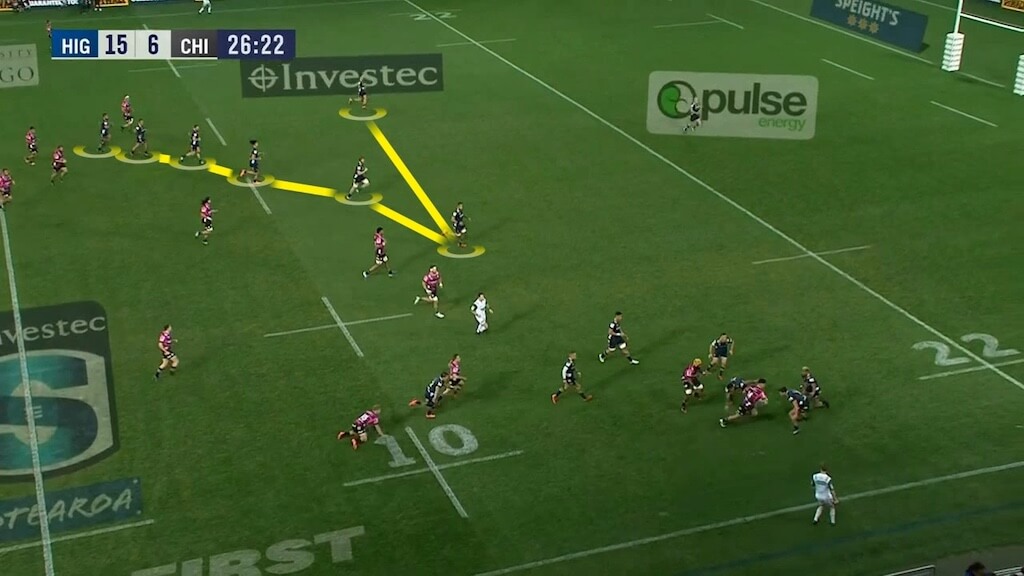 That wouldn’t be an issue, but remember the four Chiefs backs hovering over on the left hand side?

As the ruck forms we can see the Chiefs have got into this position by sacrificing their 8 and Winger. The highlanders have sacrificed: 9, 10, 12, 11 and 15 to close down this move.

Leaving all these defending players now up against a rapidly moving, strike runner, loaded attack line.

More importantly with the return of Mckenzie they have two distributors who can move the ball at pace to the outside edge and attack the thin defence and ball players in the wider channel who can exploit the mismatches. 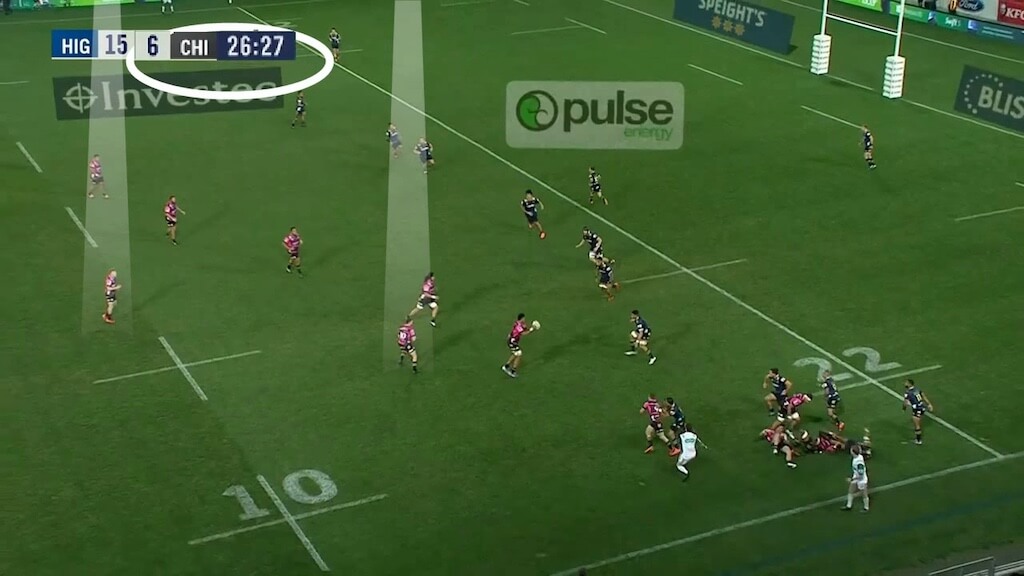 Dickson plays out the back to Cruden – this holds the inner defenders and between Cruden and Mckenzie the ball is moved around 35 m in two passes. Creating a 4 vs 2. 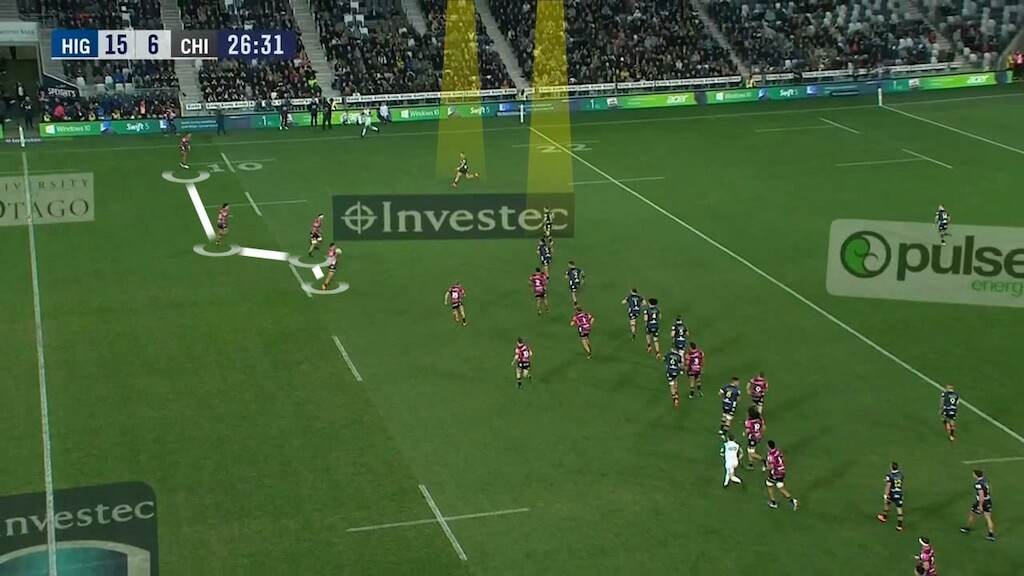 Boshier gets the ball away and Tupaea takes the ball from the flailing arms of Thompson.

It’s then just a simple 2vs1 to finish the try as Wainui canters in untouched.

It’s great Rugby from the Chiefs, it’s a simple attack pattern (dare we say reminiscent of Wales under Gatland, dragging the defence to one side on primary phases and then using the line behind to stretch them again back the other way).

The speed of ball movement and the ability to pass under close pressure in these outside channels is really important and key to their ability to exploit the opportunities their initial jab has opened up.

Keep in mind the Chiefs only lost to a last gasp drop goal, their reaction to this loss will be interesting to watch and track.