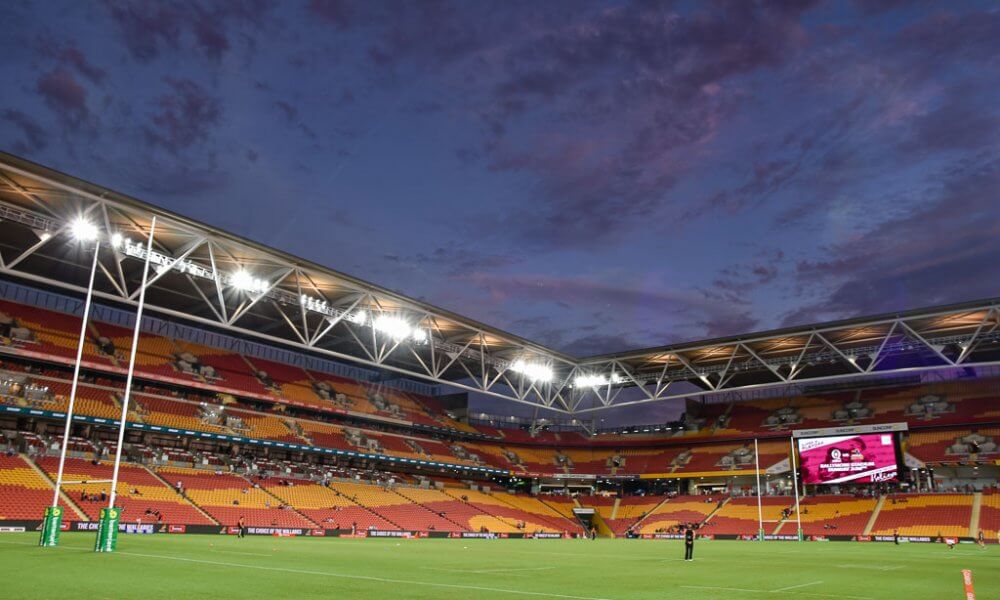 Super Rugby returned to (some of) our screens this weekend gone as the New Zealand version, Aotearoa Super Rugby, returned with two cracking games played in front of two pumping crowds.  The Australian version is a few weeks behind, as we have with most things throughout this COVID19 period, with a new domestic competition incorporating some intriguing new laws, enough to build the anticipation among Aussie rugby fans.

With the tournament still weeks away there’s a lot of time for new developments to play out before that first game, but why not take a look at the current status of some of the key elements of the event.

Steve Lenthall published the draw on release last week.  It is pretty much as we’d expect once we had confirmation the Sunwolves wouldn’t be involved. The Force are back to make a five-team tournament, which gives us a ten-week ‘home and away’ season.

It’s not a true home and away season of course, with the Force still a little uncertain as to if they will get to play their full allotment of home games, in WA. Much will depend on that state’s government guidelines around their borders.

We don’t know where the Tahs are going to play their home games either. One assumes because they have to check if there are any stadiums in the state that don’t need significant upgrades.  Much could be reliant on what size of, if any, crowds are permitted in venue.  If crowds are permitted, based on a percentage of the capacity as suggested, then NSWRU may look to take their games to ANZ Stadium to maximise the numbers attending. 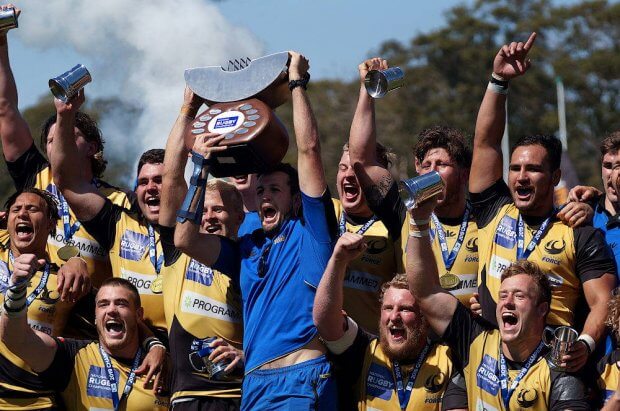 As with the Aotearoa competition, the Aussie version has its own Law Variations, as listed here with notes specific to that law.

Red Card – A red carded player can be replaced after 20min

The goal line drop out and the 50-22/22-50 were both part of the NRC last year, albeit without the same level of criteria built around it. The mark rule should apparently be renamed the Matt rule, as it was pushed by Matt Toomua as part of a law review committee that seemingly didn’t meet too often.  The final law variation, regarding the replacement of a Red Card, may not even be seen this season.

While not being a law variation, the word out of HQ is that match officials will be told to focus on policing the breakdown, limit the number of scrum resets, and get tough on cynical and repeated infringements to speed up play. These has been a similar focus in New Zealand with both games featuring a high number of penalties particularly around the ruck.

The high-profile departure of Izack Rodda, Harry Hockings and Isaac Lucas was the biggest player related news over the break.  Frankly, I still can’t believe we won’t see these players were maroon again.  A damn shame. Henry Speight is off next year, but is expected to play a game or two at least.

The loss of a couple of two-foot locks, one a Wallaby and the other a Wallaby to be, is a massive blow.  Ryan Smith, from the Brothers club, has been brought into the squad as a replacement but we are likely to see Lukhan Salakai-Loto relinquish his #6 jersey and move in tight to partner Angus Blyth at lock. More significantly this could see captain Liam Wright moved to blindside with Fraser McReight getting the 7 jersey to make one the most exciting backrow combinations, with Harry Wilson, in the country. And one that could be very dangerous under the new ruck interpretations. 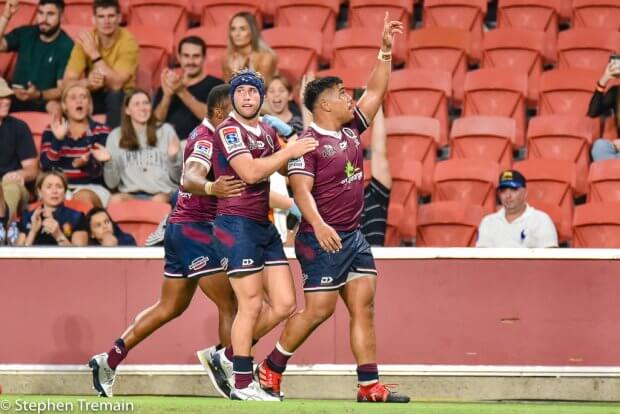 Not a lot of news around the Waratah’s off-season. We know there will be one face we won’t be seeing run out in sky-blue again – that of veteran hooker Damien Fitzpatrick. The highly respected rake has been forced into retirement in a blow to a NSW team that has, in the previous the other season earlier this year, struggled to show much direction or application. No replacement has been announced with Robbie Abel most likely to wear the 2 jersey, at least initially. 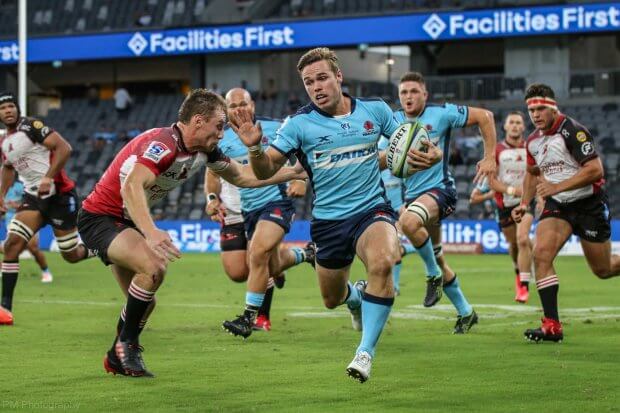 Will Harrison challenging the line.

As you’d expect from the previous conference leaders, the Brumbies are pretty rock solid.  They have welcome back former Brumby, and most recently of the Sunwolves, Ben Hyne. Hyne comes in as injury cover for the injured Cadeyrn Neville who is expected to miss at least the start of the Super Rugby competition. 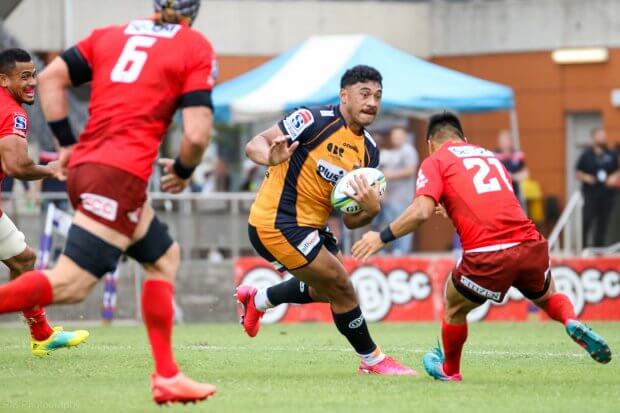 Some intriguing signings down in Melbourne as our Australian 7s players look for some game time with the chances of a World 7s Series in the near future being slim. Former captain Lewis Holland, young-gun Lachie Anderson and the powerful Jeral Skelton have all been signed.  Kiwi rugby has long been able to manage the transitioning of players between the two versions of the game, so it will be interesting to see if these three can match up.  All have an excellent breadth of skills and could be absolute stars, with the younger Anderson and Skelton particularly exciting. 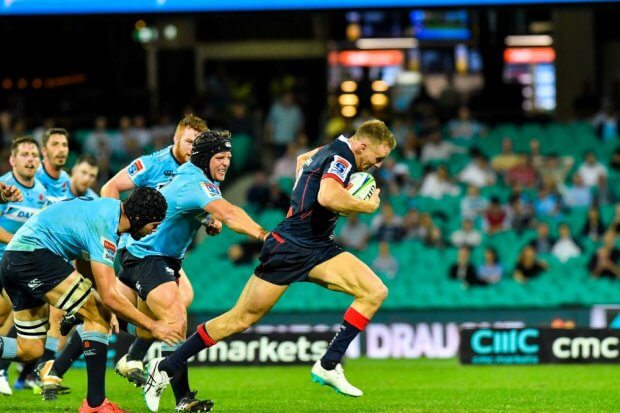 One suspects the signings haven’t stopped for the Force, after their recent announcements of Wallabies Kyle Godwin and Greg Holmes plus former Force-ites Jono Lance and Ollie Atkins.  They might need a couple more big guns in key positions (Rodda, Hocking and Lucas would be a fair start) to really trouble the competition, but they’ll bring passion and purpose to the competition that runs the risk of seeming like a meaningless gap filler.

I don’t see any reason we won’t see much of the same as the previous Super Rugby season.  The Brumbies are absolute favorites for the competition and their canny ruck master, Lord Laurie Fisher will be all over the interpretation of the breakdown.  My beloved Reds showed they were trending up at a good time, but what impact the drama around the ‘Picone 3’ has on their game is anyone’s guess.  I am backing them to finish top two, with the final spot in the top three a battle between the frustrating Rebels, the disappointing Waratahs and the up against it Force.

Moving on from what I THINK will happen, this is what I HOPE happens.  I HOPE the players and coaches look less to the law variations to speed up the game, and look more towards themselves.  I HOPE they take it upon themselves to realise that fast and skillful rugby is just as much fun to play as it is to watch.  And, by God, do we need to have our teams that both our players want to stay and play but our fans want to come and watch.

Which brings me to my other HOPE.  I HOPE the fans get behind it.  It’s time to stop grumbling about Raelene, and Clyne, and Wiggs, and RUPA, and Cheika, and News Ltd, and Israel, and Picone (yes, I note the hypocrisy) and all the other shitty things that have happened in Australian Rugby of late. I HOPE the fans, firstly, CAN get to the games and, secondly, DO get to the games.  The crowds in New Zealand were awesome last weekend. We may not have the same freedom to fill our stadiums, but I sure do bloody well HOPE we get some people in them – as many as we can – and they are bloody well enjoy themselves while they are there.