Analysis: Lessons from a Brumbies autopsy

Analysis: Lessons from a Brumbies autopsy

Sometimes when you look at the stats of a team over a season, they don’t really tell the story of that team on the field. But when it comes to the Brumbies in 2011, the story is not only writ large, it’s also fascinating (in a car crash on the side of the road sort of way).

What makes it so interesting is the extremes that the Brumbies occupy, in measures both good and bad. Much has been made in the press (and incessantly by Fox Sports commentators) of how good Aussie fans loathe kicking and love running. Well if that’s the case, the 2011 Brumbies are the team for you. 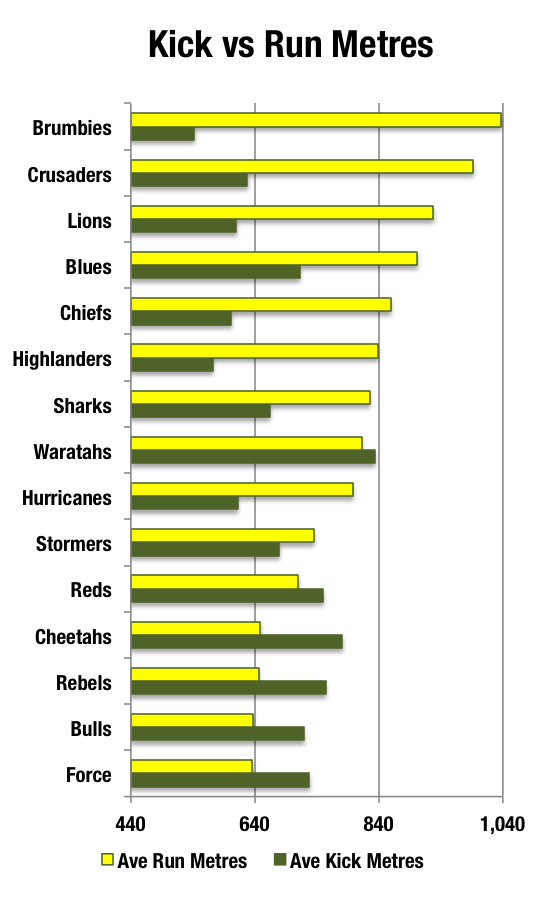 Combine this amount of possession with

and you have the team that runs more metres than any other in Super Rugby. In fact, they’re the only team to break 1,000 metres per game. And joy of joys, they kick less than any other team! Just 16 hoofs per game for 542 metres gained (you won’t be surprised to hear the Tahs kick the most: 26 kicks for 833 metres). See the chart opposite (click to embiggen).

So, with attack stats like these, how is it that the Brumbies are scoring just two tries per match, sitting at 13th in the table with two wins and nine losses, and chalking up 12-year record lows in crowd numbers?

We know that “Stinger” Rea has a few theories on the root causes, but with all these metres gained, what are they doing wrong on the field to stuff up these attacking movements?

Penalty-wise they’re not doing well, averaging 12 per game, though the least-penalised teams are conceding nine. What stands out is what’s happening, or rather not happening, at the breakdown. The Brumbies are second-last on the table (above the Rebels) in terms of how well they defend their own ball.

Once every 14 breakdowns they get turned over. Compare that to the Waratahs, who lead the field on that score with once in 22. At the same time, the Brumbies commit more men per breakdown than any other team. They also have the lowest amount of fast ball from their own rucks, at 18 per cent (the Highlanders average 29 per cent).

The picture is becoming clearer: the Brumbies are playing an extreme run-at-all costs game plan, without the pack to base it off. Phase upon phase can be strung together, gradually working the ball out of their own half, but eventually the opposition will disrupt them at the breakdown – first slowing the ball, then sucking more runners into the ruck and  making it harder for the next phase to make the gain-line. Eventually the attack breaks down through turnover or penalty.

In the face of the following facts:

the question for me is why they’ve continued with it! In our latest podcast, Brumby hooker Stephen Moore even admitted that it has been discussed, but then ploughed on with — oh to be a fly on the wall! I wonder what an experienced head coach might have said in those team meetings?

The next time someone tells you a team just needs to run it more, tell them to be careful what they wish for.

John O’Neill, the ARU and the Politics of Envy
The Crooked Feed No. 4