World Series Rugby kicks off with a Force win 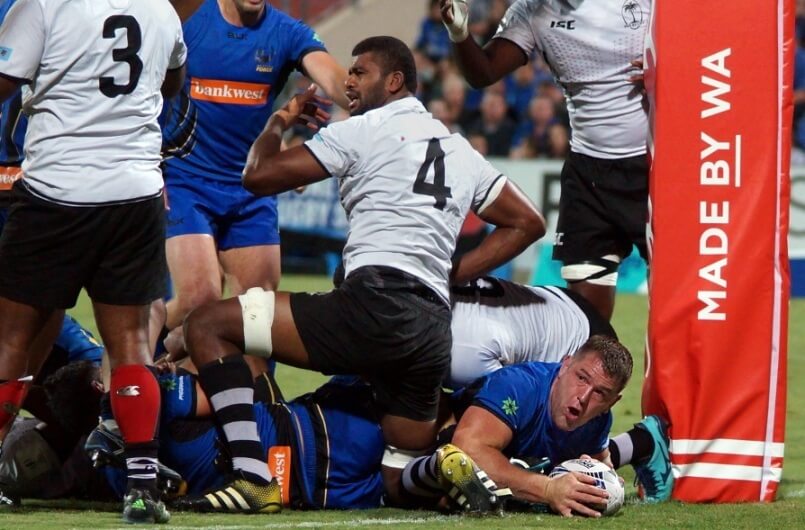 World Series Rugby kicks off with a Force win

It was a beautiful night for rugby in Perth as the reborn Western Force ran out in front of a capacity crowd to face a Fiji team full of talent looking to push for places in the world cup squad later this year.

The participation had been building all day and the mood was already jubilant heading into the ground. By the time the pregame entertainment featuring Wolfmother, dance troupes, fireworks and skydiving mascots had subsided the crowd was at fever pitch and absolutely exploded as the Western Force finally returned to the playing field.

The Fijian haka was answered with an Aboriginal war dance which were both well received and the game got underway. It was clear from the outset that this was no training match. Both teams attacked the ball with ferocity and looked for opportunity to break the opposition line wherever they could only for the gaps to close hard. Fiji had the first opportunity to score in the first few minutes but pushed the penalty shot wide. When the Force got an opportunity at the other end they made no mistake, sending Marcel Brache over in the right corner for the historic first try of World Series Rugby.

A Fiji yellow card for a no arms tackle gave the Force a second opportunity and they promptly made it 14 – 0 through a good forwards try under the posts. The Force managed a third try before holding out a concerted Fiji effort on their own try line to go into the half 19 – 0 up.

The second half began after another short Wolfmother set and immediately Fiji increased the pressure leading to an early try to get on the board. The pace of the game started to tell on both teams during the second half with the introduction of subs disrupting the rhythm of both teams a little. Heading into the final quarter the Force got a 4th try to pull out a comfortable lead but when Fiji pulled one back with only 5 minutes left to make the gap just 10, the game came back alive. Both teams were well aware of the “power try’ on offer and threw caution to the wind with the Fijians especially showing some of the great skills they are famous for as they pushed for the chance to take the game in the dying minutes.

The Force defence held firm though, forcing a mistake deep in their own 22 to secure a hard fought, emotional 10 point victory 24 – 14. You could feel how much it meant for the players to secure a victory in front of the ‘sea of blue’.

There were some very promising performances on both sides tonight, but the real man of the match was the man that made this game possible at all, Andrew Forrest. This was rugby as a spectacle and it was thoroughly entertaining. If World Series Rugby continues in this vein I cannot see it being anything but a success.

ReinFORCED – they’re back!
Force make it 2 from 2 with win over Tonga