Fans have been waiting almost 300 days to see a rematch of the 2014 Super Rugby Final and this Saturday at ANZ Stadium it will finally arrive. What fans might not have been expecting however is that it features the sixth and ninth ranked sides in the competition.

The Waratahs’ topsy turvy season continues to roll on after a shaky win at home against the Sharks last start which has helped put some distance between them and their dismal performance the week before against the Force. It’s there for the taking for the Tahs; a favourable run home should see them top the Aussie conference if only they can string some decent performances together. If they falter however, they could very easily see themselves missing out on a finals spot altogether.

The Crusaders have had their own up and down season. After another traditionally slow start, the team from Canterbury probably thought it was business as usual however this year the script they’ve been reading from has been very different. 2015 has seen the meteoric rise of the Hurricanes and Highlanders which have all but extinguished the Crusaders finals chances. They need to win their last four matches with plenty of bonus points to stand any chance of progressing.

Hooper v McCaw – the young buck against the old bull

Crusaders coach, Todd Blackadder must be a fan of theatre because he’s edited his usual script to put Richie McCaw back in the number 7 jersey for a terrific matchup with Michael Hooper. This will be the final visit to Sydney in the famous red and black of Canterbury for Richie McCaw and Dan Carter and Waratahs fans will be hoping it’s not a happy one. McCaw has spent much of the year flitting between number 6 and the bench but this week he replaces Matt Todd on the openside of the scrum. McCaw will be hoping for an old fashioned scrap at the breakdown and the Waratahs will be hoping to hear the immortal words, “hands off red 7” from the mouth of South African referee Marius van der Westhuizen.

Hooper’s running game continues to be his strength and a couple of line breaks and a try assist last week showed just how dangerous he is. He’ll still be smarting from dropping a ball cold after making a line break last Saturday against the Sharks. Maybe he envisioned stepping the fullback and running 70 metres to score a little too soon?

What is certain is that both men will be very influential on the outcome. Hooper leads the Tahs in defence and gets the pack going forward with ball in hand. Whether he can get keep McCaw busy chasing him instead of spoiling the Tahs breakdown ball will have a substantial impact on proceedings. 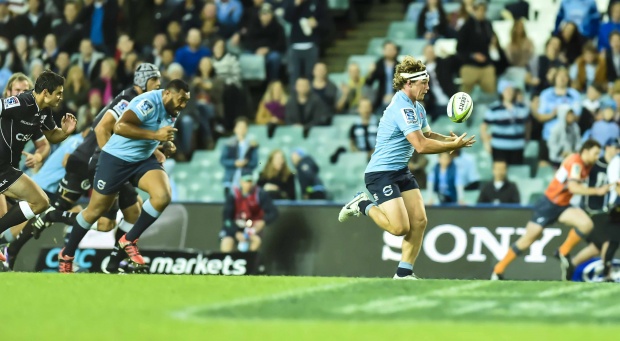 Michael Hooper spilled his lollies against the Sharks

If the History Channel makes another series of “Greatest Tank Battles”, we may well see it featuring Naiyaravoro and Nadolo, the two biggest wingers in Super Rugby. After being equal leading tryscorer in 2014, Nadolo has arguably lifted his game to another level in 2015. He’s been an absolute standout for the Crusaders and has been the crux of their attack particularly in the early rounds when the rest of their backline was really struggling. With a deft kicking game adding another string to his bow, Nemani will be one for the Tahs to watch out for.

Contract rumours have been persisting around Naiyaravoro for much of the season. What was originally a link with Edinburgh is now a confirmed contract with Glasgow. If there’s any chance of Taqele remaining in Australia it revolves around receiving a Wallaby cap in 2015, thus making him ineligible to play for Scotland in the future. Whether there’s any truth to that is still uncertain but regardless, Waratahs supporters will be hoping Big T has another big game. Two barnstorming tries in consecutive weeks have tongues wagging and everyone will be hoping there’s more in store on Saturday night. 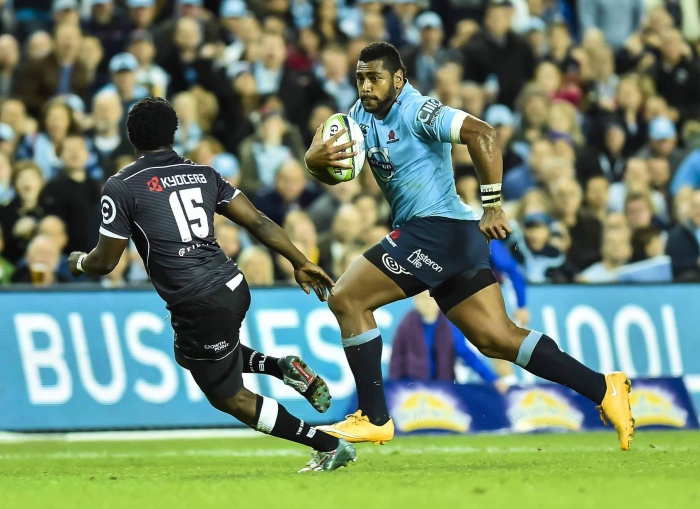 A fullback for ants? Mvovo would need to be at least 3 times bigger to stop Taqele.

It’s now or never for the Waratahs. To have a realistic chance of defending their title, they have to top the Aussie conference. If the Tahs play anything like their last couple of outings they’re unlikely to be good enough. Working is their favour is the fact that they’ve managed to produce their best performances in the biggest games in 2015 and they’ll have had their eye on this fixture since the draw was released. Colin Slade has been in career best form for the Crusaders and if he fires again they’ll be hard to beat. That said, everyone loves a good fairytale so the Waratahs should get home in a nailbiter.

Thursday’s Rugby News
Reds v Sharks – Whose blood will be in the water?