Canes too fast, too strong for the Force 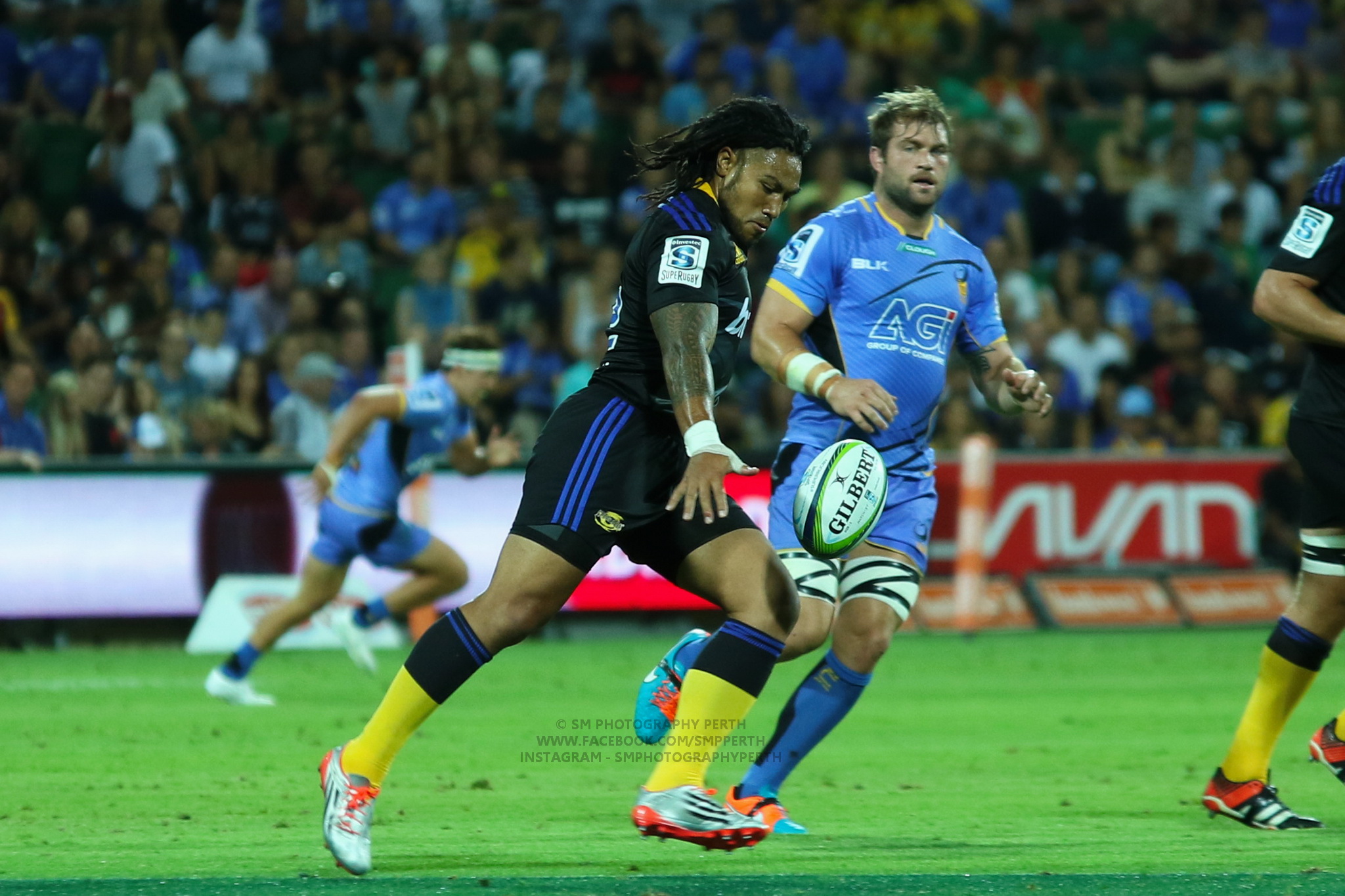 Canes too fast, too strong for the Force

The Hurricanes drifted early before blasting past the Western Force in their Round 4 Super Rugby clash at an old speedway track in Palmerston North.

The visitors made a match of it for the first hour of the game, but five tries in the last twenty-odd minutes made it a 41–6 caning in the end. It was a well deserved bonus point win to the Hurricanes.

Peter Grant, starting at flyhalf for the Force in place of the injured Jono Lance, opened the scoring after 14 minutes with a penalty goal from more than 40 metres out. The seasoned South African was also taking the ball to the line early in the game. He was clobbered by Hurricanes captain Dane Coles in a late tackle with no arms, though, which gave him a chance to double the lead. But his long-range attempted penalty kick went wide.

His opposite number Beauden Barrett also missed a few shots at goal so it wasn’t a exactly a kicking masterclass. Perhaps more worrying for the Force was their clearing kicks not going into touch. That can cause problems when facing a back line stacked with All Black caps, and the Hurricanes did manage to get their trademark free-flowing game going. They were sweeping up the field with ease and popping passes to the next man in – but just couldn’t finish off the movements. A forward pass, foot in touch, or scrambling defence from the Force managed to keep them out.

It took a lineout play from close range to get the home team on the board. Coles threw to Victor Vito at the front and then got the ball back. He was tackled short before using the old extender arm to plonk it down on the try line. The TMO gave approval for the try and Barrett added the extras from the sideline for a 7-3 lead in the 25th minute.

The Force also had their chances in the first half. Winger Marcel Brache ran a perfect line to bust into the 22. The ball was sent to the right through Grant to Dane Haylett-Petty out wide but was knocked on a few metres out under pressure from the Canes defence.

And a few minutes before the break, Alby Mathewson threw a dummy after taking the ball from a scrum and made a long break into opposition territory. The ball was recycled before Nathan Charles injected himself into the line and threw a wide cut-out pass Cooper-style … but unfortunately it wasn’t Quade on a good day that he was emulating and the ball went straight to Cory Jane. The Canes were called back for offside so it was worth a shot but still, Charles should probably stick to working on his lineout throws.

Dane Haylett-Petty was unluckily pinged for a late tackle when standing his ground after a kick ahead from TJ Perenara. Barrett’s penalty shot extended the lead to 10-3, which remained the score at half time.

Ben McCalman hits it up for the Force

Following the break, a couple of penalties to the Force put them on the attack. They never looked as dangerous as the Canes when putting the ball through hands, though. So when Barrett was penalised in front of the goal, Matt Hodgson pointed to the sticks and Grant slotted the kick to reduce the margin to 10–6.

After yet another Force clearing kick went to opposition fullback James Marshall instead of finding touch, the Canes went straight on attack. Winger Julian Savea made it over the half way line before the ball went to big lock Vaea Fifita running at speed. Fifita gassed Junior Rasolea on the outside and ran 30 metres down the sideline. He looked certain to score in the corner before Dane Haylett-Petty cut him down and into touch with a try-saving bootlaces tackle.

The home team were continuing their pattern of the first half, making much of the play but also leaving most of the points on the field. Final passes going forward or being knocked on were keeping the Force in the game. Matt Hodgson’s work at the breakdown was also a big factor for the visitors. After winning his third or fourth turnover penalty at 55 minutes, the Force kicked for touch and set up an attacking lineout 7 metres out. But while the Canes had managed to convert a lineout into a try, the Force couldn’t manage it. The ball was lost in the rolling maul within sight of the try line.

Perenara booted it downfield and the counter-attack was on for the Canes when Brache was turned over on halfway. Julian Savea carried it over the 22. Strong runs from lock Mark Abbott and then Coles and Fifita took it on, before Perenara got the ball to Marshall who crashed over in the tackle to score! The last pass might have even been forward but the side-on view in the replay cut to a front-on view at the right time and all was well. Barrett missed the extras from the sideline and the score was now 15–6 with 22 minutes to go.

The Canes then put the pedal to the metal in the final quarter. Perenara finished off a great team try after multiple phases. A further three tries were scored after the bench was emptied, with Blade Thomson, Ngani Laumape and Ardie Savea crossing the line. Replacement centre Willis Halaholo was most impressive for the Canes, twice putting on a massive sidestep to break through the line, and he was instrumental in two of the tries.

While the Force did well to stay close for three quarters of the match, the Hurricanes always had an extra gear and their class showed through in the end. After a poor showing in the early rounds, the Canes might now be ready to recapture their minor premiership-winning form of last year. Final score: 41–6.

TJ Perenara was a livewire for the Canes at scrumhalf

The Force losing possession from an attacking maul in the 56th minute within sight of line and still with hopes of taking the lead. One minute (and 95 metres) later the Hurricanes were 9 points clear and never looked back.

TJ Perenara – the battle of the scrumhalves was a feature of the match. Alby Mathewson had his moments but TJ had the greater influence. Popped up everywhere around the field – a real thorn in the side to the Force. Matt Hodgson was probably the best for the Western Australians.

Dane Haylett-Petty showed he knows how to defend at the back with that standout try-saving cover tackle on Fifita. He did lose the ball once on attack but still had a good game overall. Could be a chance for a Wallaby squad call-up this year.