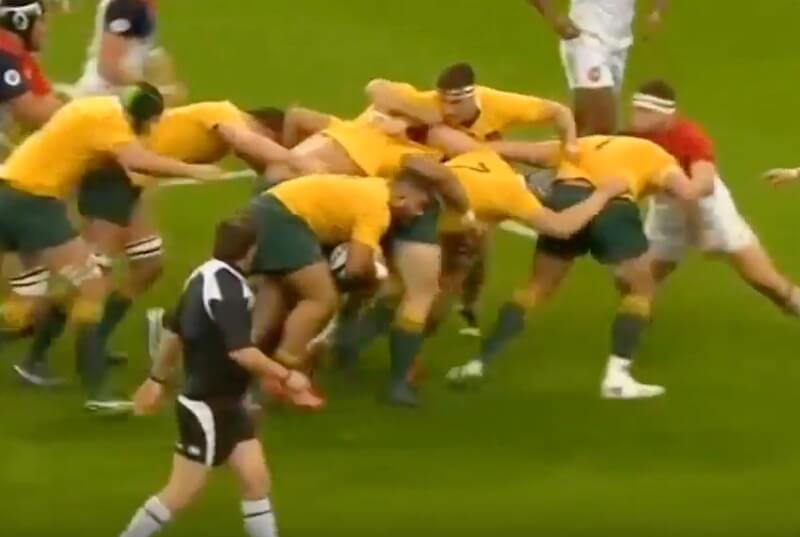 The French national anthem (La Marseillaise) is a stirring call to arms where the French people are called upon to take up arms and march to protect their families. “Marchons, marchons” means “let’s march, let’s march”. I reckon Micheal Cheika and the Wallabies were singing the French anthem on the team bus on the way home from the Test match. They march on to Lansdowne Road where the Irish will be plotting their Grand Slam downfall.

The win in Paris brings credit to the entire squad and their coaching staff. The boys certainly deserve to savour the moment and enjoy their sweet victory. Winning at the Stade de France is not easy, but to win with what was mostly a second string team speaks volumes for Michael Cheika’s troops.

The Wallabies will take great confidence from the win but no doubt they’ll reflect on their performance over the next 24 hours. Today are some thoughts on what they did well. Tomorrow – what they will want to work on.

We were very clinical in the oppositions 22m zone throughout the match. It started well for us when the stand-in Captain (David Pocock) decided to go to the corner from a penalty about 20 minutes into the game. The Wallabies ran a tempo lineout to win the ball easily and the 6+1 set up enabled them to set a great drive which resulted in a penalty try. Note how the Wallabies used tempo to establish an advantage over the French pack.

Early in the second half, Will Genia took it upon himself to take a quick tap in front of the posts. Not sure the coach or the the captain were too impressed until the Wallabies scored and turned a certain 3pts into 7. The try came off the back of some tough close quarters running and the Australian backs having a crack on the left edge. Foley’s running line off Genia was brilliant and the pair are developing a terrific halfback combination.

Soon after the Foley try, the Wallabies created another chance in the same corner. Foley did well dropping Luke Morahan into space, he in turn did very well getting a ball away to Sefanaia Naivalu who was tackled early and the Wallabies were denied what may have been another try. Coach Cheika would not have been happy with the call but with the Wallabies coming out of the sheds firing, it seems he chose the right words at half time.

Australia eventually created a chance in the opposite corner with about 20 minutes to go. Genia made a terrific line break in midfield before he threw a monster pass to Tevita Kuridrani who scored one of the best finishing tries you’ll ever see. The quality of the finish will have made some amends for last week’s selfish score and reminded the coaches that he’s a selection option at 11, 13 or 14.

The Wallabies can be delighted with their Red Zone Attack efforts. They scored 3 well taken tries and should have had another. Had they not been so clinical in this part of their performance it may have been a different result.

Last week the Wallabies had trouble getting out of their own 22m at lineout time. We were turned over twice at the front of the lineouts and these errors almost cost us victory against the Scots. This week we were very clinical with our lineout exit. Notice how effective the combination of taking the lineout at tempo and throwing to the back can be.

Whilst our exit lineout was very effective our exits from kick off receipts could be better. France kicked long with a big chase to apply pressure and trap us inside our own 22m. We tried playing a bit of rugby before we set our kick chase team loose. In the following clip, you’ll notice Bernard Foley’s kick landed in line with where the ruck started. We essentially made 3 passes back before we kicked and this resulted in us being under pressure with a loose ball on the deck in our 22m…not good.

In hindsight, the Wallabies may have been better off box kicking from the original ruck and putting the French under pressure on the halfway line. It always easy to have 20/20 vision in hindsight but with so much at stake in the next 2 x Test matches we may want to consider simple “Exit Easy” tactics from kick off receipts.

The Wallabies Attack Coach (Stephen Larkham) is doing a great job designing new plays for each Test match. It’s not an easy job managing all the changes in personnel and coming up with new material that has to be run accurately on limited training time and reps.

I particularly liked the cross kick run around 10 minutes into the Test match from a lineout on the left hand side of the pitch. Our midfield set up was designed to encourage the French defence to blitz creating space for Bernard Foley to clip the ball into. Whilst this play didn’t come off, it certainly might have and it sent the French a message – if you keep blitzing we’ll keep targeting your isolated back three.

The Wallabies also unveiled a new 5-man lineout play against the French. They ran a spread option for Sean McMahon to find space as well as a more direct option for Tevita Kuridrani.

Both plays were designed to keep the French guessing and throw smoke for the Irish defence analyst. I don’t expect the Wallabies will use these starter plays next week.

Great stuff from the boys. Tomorrow – what they’ll want to work on.