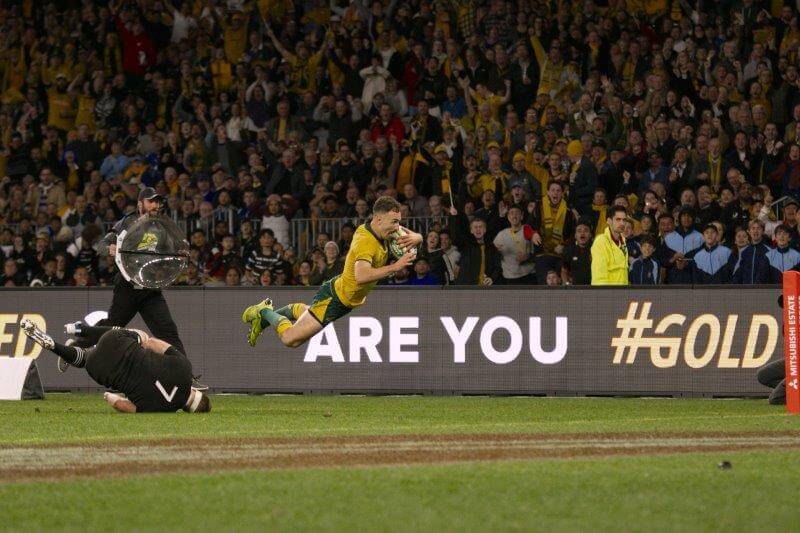 The Wallabies have been searching for an effective combination behind the scrum and after their performance in Perth they must feel they’re close to bullseye.

What was impressive in this performance was the mix of balance and power. The Wallabies six-try blitz showcased a wide range of attacking threats and we’re going to have a look at a few of them here.

James O’Connor was the perfect link between Christian Leali’ifano and the talented Wallaby back three. This first try shows his brilliant vision and skill set.

Remember this pass was made with his left hand and he’s a right-handed player. Only an incredibly confident player even attempts this play so early on in his come back game.

We need more Wallaby backs with the talent and freedom to express themselves.

Samu Kerevi plays rugby like Sir Vivian Richards played cricket – with splendid power. His centre of gravity is so low that almost nobody can tackle him side-on or front-on.

His Super Rugby stats have been incredible for a few seasons now. He breaks tackles for fun and offloads for kicks. He truly is a world class centre.

The late great Scottish rugby commentator Bill McLaren once said that Irish internationa Simon Geoghan was more slippery than a Congo Eel. When I see Kurtley Beale running off Will Genie it reminds me of that description.

Kurtley has started running off Will Genia late in games and he’s scoring tries. What’s most impressive about this wriggly run is that it’s a second effort. He carried the ball in the lead up to the bust.

The Wallabies backline is really looking sharp but they will have to repeat their Perth efforts this weekend in Auckland to demonstrate their true quality.

In this column we looked at the X-Factor skills of O’Connor, Kerevi and Beale. We haven’t even mentioned the speed king Marika Koroibete.

So the Wallabies certainly have plenty of strike power and the great thing is there’s still room for more speed if they go with another flyer ahead of Reece Hodge.

It all starts with ambition: A schools rugby analysis piece
This will have New Zealand worried