AIC Round 3: Eddies run over Ashgrove, other results and table. 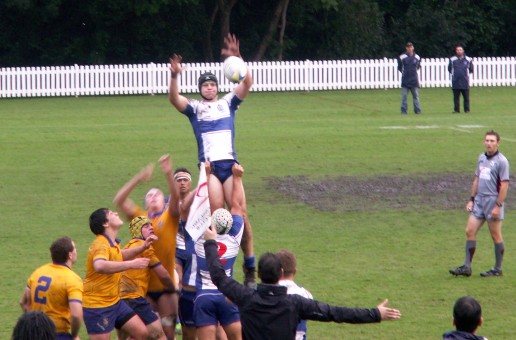 AIC Round 3: Eddies run over Ashgrove, other results and table.

St. Edmund’s have affirmed themselves as premiership contenders defeating Ashgrove 20-12 in round 3 of the AIC schoolboys competition.

Playing in wet conditions the game started slowly and scrappily and Ashgrove elected to play a territory based game early on with inside backs Mitch Treleaven and Henry Devine kicking often in the early stages. There were many knock-ons because of the greasy ball and numerous wins against the feed and throw at scrums and lineouts in the early stages. 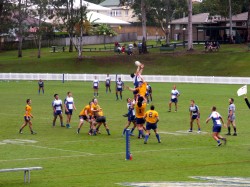 Eddies scrum-half Daniel Turner put insurmountable pressure on his opposite number at scrum-time, wrapping him up before he could clear the ball 3 times in the first half. This pressure then flowed onto the rest of the Ashgrove team.

Eddies asked many questions of Ashgrove’s defence and their first real attacking chance of the game came with Humphreys and Flanker Jacob Lindsey linking well, but the slippery pill proved to hard to hold onto.

Minutes later Eddies were back on the front foot and an infield kick from Humphreys whilst straddling the touchline ended up with an attacking lineout in the Ashgrove 22.

After winning back the ball lost in their attacking lineout, Eddies lock Ryan McCully picked the ball from the ruck and ran through some weak high-tackle attempts by Ashgrove defenders to run 20 metres down the blindside to open the scoring.

Eddies’ attack gained momentum from there and some destructive running by their centres and slick counter attacking from dangerous fullback Clifton Setu began to seriously split the Ashgrove defence.

But Eddies weren’t able to add more points thanks to some desperate last line defence from Ashgrove and the difficult conditions. The first half ended with scores at Ash 0 – SEC 5

The victory by Eddies fans in the half-time sumo-suit wrestling showdown proved to be an ominous, if humorous indication of what was to come. 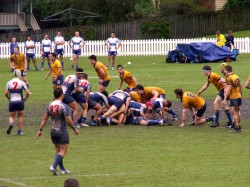 The game opened up in the second half and a huge 50 metre break by Eddies replacement backrower Brock McNulty set the tone for the rest of the match. Eddies continued to exploit the opportunities in the centre channels and fly-half Carter Auld provided a good inside ball off a backline play to put Turpin through a gap to score.

Ashgrove started to fight back with some good running from Devine, and they were finally on the scoreboard after fullback Jacob Manning made a streaking run down the side to be tackled 10 metres from the tryline, but was able to pop it up to winger Danny Conway who scored with his first touch of the game. Treleaven added the conversion.

Despite  Lindsey receiving a yellow card off the ensuing kick off for interfering with a player in the air, a man of the match performance by Turpin who split through the Ashgrove defence whenever he had the ball, even making a 70 metre break in the second half and some strong carries by tighthead prop Lui Afele made sure Eddies kept the momentum swaying in their favour

What looked like a certain hospital pass turned into a whole field effort as Humphreys slide out of the attempted tackle from his opposite number and ran 60 metres before drawing the fullback and passing to his centre counterpart Turpin to score his second of the game. 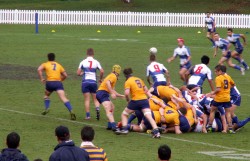 Eddies on the attack

Humphreys again provided the catalyst for another Eddies attacking effort, scooping up a dropped ball and looked to have spoiled the opportunity, pushing the pass to no-one but it was knocked back into him by an Ashgrove player deeming him onside and two passes later the ball found its way to the ever present Setu who beat his man on the outside and managed to dive over in the corner.

Ashgrove managed to stay in the game however, and some strong running from the back of the ruck from loosehead prop Joe Cloake aswell as a good wrap around play between Manning and winger Seb Fahey got them into Eddies 22.

After some overwhelming pressure off a 5 metre lineout and disciplined patience, Ashgrove skipper Sam Clarke burrowed over in the corner, rewarding himself for a commendable performance in a beaten team.

Ashgrove refused to give up, and even after another scoring attempt by Eddies which saw Setu tackled out 5 metres before the tryline after exploiting a 3 0n 1 overlap, Manning sliced through the line in his own 22 to run 60 metres into the Eddies half, however he was covered by a waiting McCully and the match ended minutes later.

AIC Table after Round 3