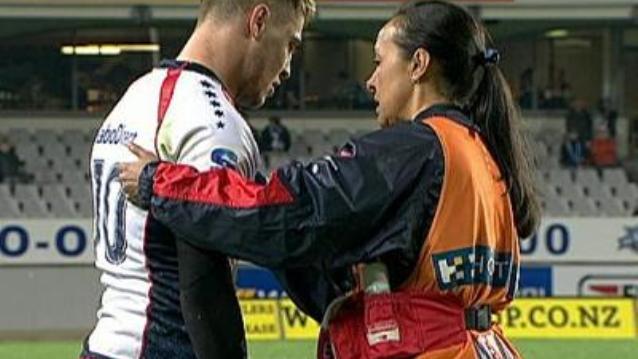 A brilliant second half by the Melbourne Rebels couldn’t make up for the mistakes of the first, going down 36-32 to the Blues in an 11-try pie-fest in Auckland.

They’re Jekyll and Hyde, these Rebels. Depending on when you switched on the television, you would have seen some of the most laughable attempts at defence possible, as opponents just waltzed through the outside channel to score, or some of the most exciting attacking plays in the competition, made possible only by a team willing to throw everything they’ve got at the opposition.

I wrote last week that the Rebels were coming, and that parts of the puzzle were starting to click together. I still believe that, but for the Rebels, it almost entirely depends on which Rebels team shows up, and when. If the team from this match’s second half shows up from kick-off against the Stormers, that might be enough to take the win, even if sloppy defence rears its head later in the match.

The job of making the Melbourne Rebels into a serious contender is half done. They just need to decide which half.

From kick-off, it looked like teams were going to have to resort to putting the ball underneath the sticks, with James O’Connor and Chris Noakes missing three straightforward penalties in the first 10 minutes. Frank Halai opened the scoring after 10 minutes with a great run out left, but again the kick was missed.

The Rebels hit straight back, with Ali Williams fumbling the ball into the hands of Nick Phipps, who sent it to Scott Higginbotham for the line break. He sent a quick pass to Mitch Inman, who drove himself over the line for the try. The kick was skied for the fifth time in succession.

From here, the Blues took control of the game. The catalyst was a very dubious try given to Francis Saili, who looked to have knocked on an offload from Rene Ranger before chipping and chasing the ball down over the line. To the bemusement of even the New Zealand commentary, the try was awarded, and again the kick was missed.

The Blues again took advantage of sloppy defence by the Rebels, putting on sustained pressure before Charles Piutau sent a wide ball to Frank Halai for his second. To the Bronx cheers of the Eden Park fans, Noakes converted for the first time in the match.

James O’Connor looked to go down after that try, clutching at his chest, and his cause wasn’t helped by a rampaging Rene Ranger running straight into him when he first got up. He immediately left the field and went later for scans. Francis Saili was in again in the next phase, going underneath the posts to almost no defence from the Rebels. Noakes made the kick with ease.

The Rebels were down to their fourth-choice 10 before half-time, with substitute Angus Roberts leaving the field with a dislocated shoulder, replaced by debutant Bryce Hegarty.

Scott Higginbotham was able to capitalise off another Ali Williams mistake at the kick-off and score a second try for the Rebels, but it was immediately cancelled out by a third try to Frank Halai, who received the ball from Rene Ranger and had half the field and only Cooper Vuna to beat. 29-10 at half time.

The Rebels looked like a different team in the second half, immediately putting pressure on the Blues line. Both Scott Fuglistaller and Scott Higginbotham looked to be over soon after the restart but were deemed to be held up. A surprisingly stable scrum and great forward work in open play soon sent Lachlan Mitchell over at the expense of Rene Ranger.

Save for a questionable drop goal attempt by Baden Kerr, the scoring opportunities started to dry up in the middle of the second half, but the Rebels were playing like men on a mission. The Rebels had to wait until just past the hour to be rewarded for their dominance, Higginbotham taking a quick tap at a penalty, Phipps throwing a bullet to Mitch Inman, who is unbeatable within 5m of the line. Jason Woodward scored his first conversion for the Rebels and, suddenly, they were within a converted try.

They would creep further into the match minutes later, with the Blues pinged straight in front for offside. Woodward took the ball and pointed for the posts. The successful penalty got the Rebels within 4 points with 13 minutes remaining.

Luke Braid would prove the saviour for the Blues, coming on and having an immediate impact. He turned over a Rebels ruck in their attacking half, then made the break as the Blues got their first attacking chance of the half. Charles Piutau sent it to Rene Ranger, who touched down for a crucial try to the hosts.

The Blues would soak up enough time between then and the whistle to secure the win, but the Rebels would not be silenced that easily. From a scrum on the halfway, Mitch Inman made a splendid break before curling a pass around Ranger to send Jason Woodward over, securing a deserved double bonus point result.

Luke Braid‘s 55th minute entry into the game saved it for the Blues. He turned over a Rebels ruck deep in their attacking half, then proved crucial in the try that followed, giving the Blues the buffer they needed to win.

Mitch Inman. He is coming along in leaps and bounds at the Rebels in 2013. Inman has found a new element in his running game, able to pick gaps in the opposing line with ease. In addition, he is simply unbeatable within 5m of the line.

James O’Connor’s sternum copped a few big hits in succession against the Blues, and he came off in obvious discomfort. The results of scans could have a major impact on the Wallabies’ chances, especially with Kurtley Beale still at a crossroads.