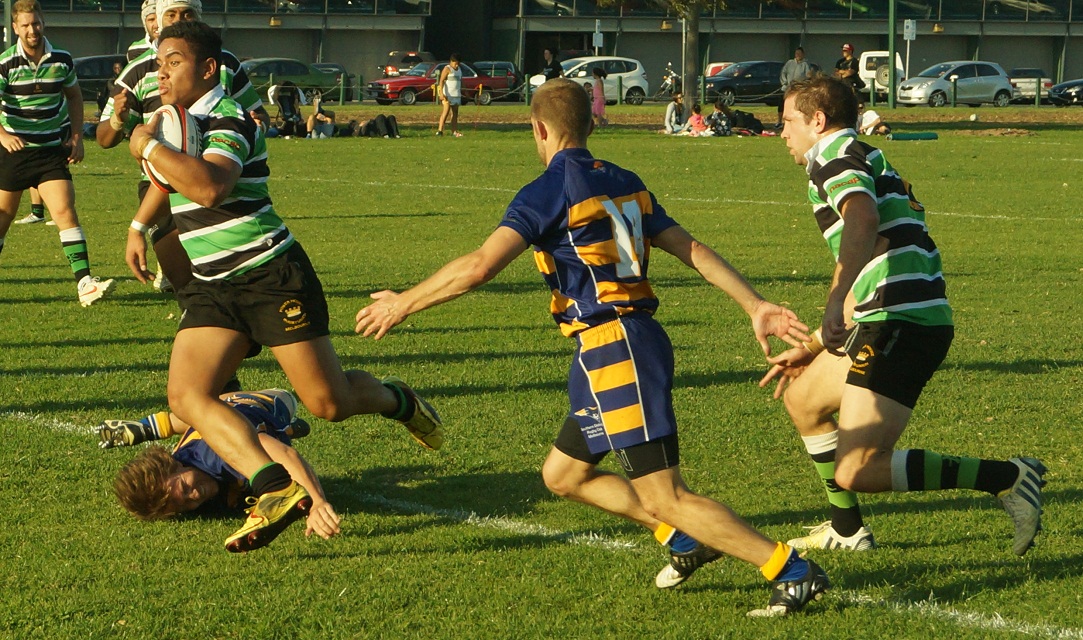 Power House continued their unbeaten run with a come from behind 32-29 victory against Southern Districts at Albert Park on Saturday.

Power House, running in to a stiff breeze in the first half, quickly found themselves behind when fly-half Wayne Mataiti, crossed under the posts after taking an offload from a barnstorming Tom Broughton. Southern Districts were over again just two minutes later following a Power House turnover inside their own quarter. Southern quickly shifted the ball to Gasa Tiatia, who took off down the left hand side and carried two defenders over the line to extend the lead to 12-0.

Tiatia was back in the action on twenty five minutes when he was shown a yellow card for a dangerous tackle and with the home side starting to dominate the possession stats, the numerical advantage gave the Power House forwards the momentum. The home side mounted an attack from halfway that stretched fourteen phases and ended up with the try being held up over the try line. From the ensuing re-start the forwards took control and when half back Stacey Knowles scooted of the back of the ruck from five out, the score was 12-5. Momentum had taken a major turn and mobile Power House flanker Junior Illie Bolalalai was in the thick of it, breaking through the midfield with regularity. In the 34th minute Bolalalai broke through off the edge of the ruck to feed Samuela, and was in support to receive the final pass and cross the line, and the sides went into the break trailing 12-10.

The home side came out firing with winger Danny Hicken crossing in the corner after just two minutes. With the Power House in the ascendance, their halves looked to send the ball wide at every opportunity. The tactic cost them ten minutes into the second period when an intercept try to Bryce Foothead put the Pirates back in front. They were over again minutes later with when Sakaria Noa scored after a powerful run from number eight, Junior Tuala, stretching the lead to 24-15 to the visitors.

The sides traded tries with Power House going over through unit Chris Aho, only to see Gasa Tiata finish a text book exercise in draw and pass to score in the corner. With five minutes left the visitors were in front 29-20.

House threw everything at the visitors and were again held up over the line after a prolonged attack. When man of the match Bolalalai crashed over from close range House were within four with time all but expired. From the kick off it went wide and a couple of missed tackles the home side broke free down the left.   When fly half Makesi Stowers broke through the line and put the ball through the hands, the Pirates’ defence faltered and replacement Hugh Parker ran through to score next to the sticks to send the visitors back down the M3 pondering what should have been.

In other fixtures, the students gave Melbourne a scare within one point of the title favourites at half time. Melbourne put on a masterclass in the second half to run out winners 51-28. Footscray travelled to struggling Box Hill and came home with the points 55-12 and Endeavour Hills went down to premiers Moorabbin 50-14.