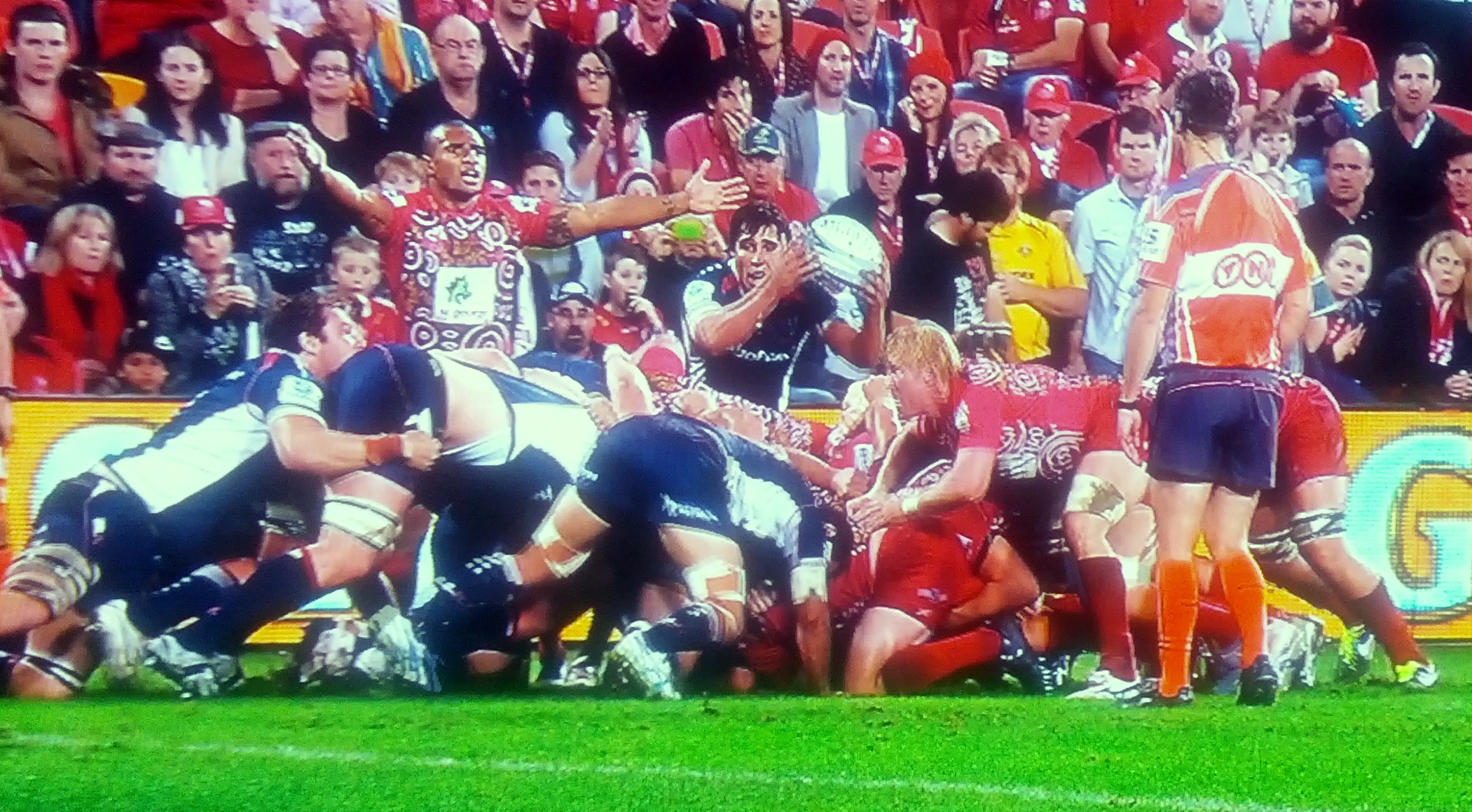 This match was highly anticipated due to the direct match up of the Wallaby 10, James O’Connor, and the player many were saying should have been, Quade Cooper. It was also Scott Higginbotham’s first game at the venue since moving South. 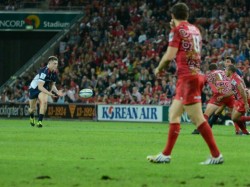 The Rebels got the first points when James O’Connor kicked a penalty goal. These were clearly both teams’ tactics and three-pointers were the only points to come out of the first ten minutes. The kicking duel clearly being won early by the Rebels as the Reds were starved of possession and territory.

It took until just after the ten minute mark for a game to break out, and it came from a kick. Ben Tapuai putting a grubber through after noticing there was no fullback. The Rebels secured the kick, but it put the Reds deep into Rebels territory. They camped there until earning a penalty, which Quade Cooper took and leveled the points at three all.

The game degenerated into hangbags 21 minutes in, with the two opensides throwing a couple each. Beau Robinson threw the first punches on camera and for his troubles he was rewarded with a ten minute rest. With the Rebels enjoying an extra man it was all there for them to do.

The Rebels wasted no time and went straight onto the attack, with Cadeyrn Neville barging over the line before being held up. The Reds camped out on their line, defending stoically through scrum after scrum. This played into the Reds’ hands as they were keen to wind down the clock with a player in the bin.

Eventually it cleared the scrum and a loose pass from O’Connor to Inman was collect by Anthony Faingaa and kicked down field, relieving the pressure. the Rebels secured the ball again, but the Reds had their tails in the air. James O’Connor lost the ball in contact and the Reds turned it over, playing with advantage, Will Genia box kicked and on the return Rory Sidey threw a pass that Luke Morahan intercepted to run in under the post. Quade Cooper added the extras. Beau Robinson returned to the field with the Reds leading 10-3.

Perhaps he was not bringing them any luck. The Reds kicked the ball out after taking it back into the 22 giving the Rebels some field position. They wasted no time and showed great enthusiasm with Scott Fuglistaller charging down a kick that took an eternity to get to Quade’s boot and scored the try. James O’Connor added the extras and it was back drawn, at 10 all.

The Reds worked their way back down to the right end of the field and slotted a drop goal to give the Reds the lead, and it looked all they had to do was wind the clock down before half time. The Rebels had other ideas, with Rory Sidey making up for the intercept he threw charging down another slow Quade Cooper kick to put regather and put the ball down under the posts. James O’Connor added the extras and the teams went to the sheds with the visitors leading 17-13.

The Rebels continued where they left off, earning a penalty straight in front, James O’Connor converting it to extend the lead to 20-13, three minutes into the half.

Other than a Quade Cooper miss, there was no more scoring opportunities until the Rebels were penalised for a trip on Saia Faingaa. The Reds too a lineout five metres out from the line. James Horwill took the ball down and they set a maul, driving the ball over for the try to Jake Shatz.

Play was stopped for the referee to look for some foul play in the melee, eventually a penalty was awarded to the Rebels on half way. The break must have put Quade off, with him missing the conversion making the score 20-18. The Rebels took a shot at goal from halfway, with Jason Woodward getting the distance but not the direction. Shortly after the Reds were awarded another penalty, Quade again lined it up, this time he didn’t miss and the Reds were in the lead again, 21-20 with 15 minutes to go.

Quade then stepped up. With the game in balance he did a pick and go and despite the traffic, reached an arm out to put the ball down on the line. Mike Harris took the conversion and it sailed over the black dot. the Reds were taking control, leading 28-20 going into the last ten minutes.

The Reds spent the rest of the time chasing another try and a crucial competition bonus point. This paid off when the Reds were picking and driving on the Rebels line before Will Genia saw a gap wide on the blind and sent the ball to Ben Lucas who crossed untouched to put the ball down for a try. Mike Harris missed the conversion but it didn’t matter, the Reds winning the match 33-20

Quade’s elasticman effort, reaching his mit out somehow to manage a try, right as the game was in the balance. He’s a big game player and he knew he needed to step up.

Jake Shatz. In what is becoming a typical day’s work for the young back rower, he was everywhere and tackling everything. Even dotting down at the back of the Maul to get his name on the scorers sheet.

Hugh Pyle and Scott Higginbotham both left the field with shoulder issues, Higger’s looking particularly bad. Nick Phipps made a last ditch attempt to show he was worthy of the Wallaby squad final 6.