WINNERS: pair of tickets to Tahs vs. Force

WINNERS: pair of tickets to Tahs vs. Force 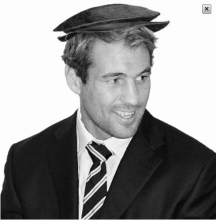 To be in with a chance of winning, just tell us below in 25 words or less how you think Waratahs captain Rocky Da Vinci will be psyching his team-mates up for this Aussie derby. The 3 entries that we reckon best capture the essence of Australian rugby’s polymath will get the tickets!*

We’ll announce the winners on Wednesday morning, so get them in by midnight Tuesday 13th March.

*Note – Green and Gold Rugby are the sole judges of the contest and hold the right to change or withdraw this competition at any time. All travel to and from the game is the entrant’s responsibility. One submission per entrant only.

AND THE WINNERS ARE….

First of all you had to represent what a modern renaissance man like Rocky would impart (some others were good though), but the winners are:

Thanks for everyone else for entering. I’m sending emails to the winners.