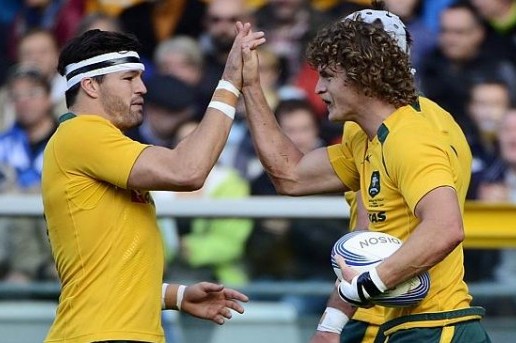 Tuesday’s rugby news has the Honey Badger’s dad emphasising the winger’s sacrifice, the Sevens squad selected, some Aussie forwards out for the final Super Rugby Round and Ben Smith hospitalised in Sydney.

Nick Cummins’ single dad Mark has emphasised that his son’s decision to sign with Japanese rugby was a “remarkable family first” sacrifice to help his seven siblings. “He’s no mercenary. He treasures playing for the Wallabies,” Cummins’ father said. “He told me that in his heart he couldn’t enjoy himself when he could be doing more for the kids.”

Two of Cummins’ siblings have cystic fibrosis and Mark was diagnosed last year with prostate cancer. A season in Japan would allow Cummins to alleviate health costs and give him more time off to return to the family. The conditions of the release may allow Cummins to play with the Force again next year.

Wallaby Liam Gill and breakout Super Rugby star Sean McMahon have been selected in Australia’s 12-man sevens squad for the Commonwealth games, the only additions to the team playing throughout the IRB world series which concluded in May. Welsh-born coach Geraint John has taken over from Michael O’Connor, only arriving in Australia to lead the squad in late June.

Gill believes that his involvement with the Sevens team will help his ambitions of returning to the Test team. “I certainly think there’s an avenue through sevens,” Gill said. “Sevens presents a chance for me to knuckle down on my fitness, my skills in space and my ball skills.”

Aussies suspended for final round

Scott Higginbotham will miss the final Super Rugby game of the Rebels season after receiving a one-week suspension from SANZAR. Higginbotham was punished after being shown his third yellow card of the 2014 season last week, with judicial officer Nicholas Davidson asserting, “These incidents are an indication of persistent offending which after scrutiny warrant further sanction.”

Likewise, Hugh McMeniman has pleaded guilty to a striking charge after deliberately dropping his knee into Reds flyhalf Ben Lucas, warranting a one week suspension, missing this weeks vital Super Rugby match with the Brumbies.

All Blacks star Ben Smith has been been admitted to St Vincent’s Hospital in Sydney with an infection after his Highlanders were soundly beaten by the Waratahs 44-16. The Highlander’s co-captain is now in doubt for the final round clash against the Crusaders, although the franchise think that there is a good chance that he will be discharged and return to Dunedin tomorrow.

The timing of the illness is unfortunate for the Highlanders, currently sitting at fourth on 42 points. A win would guarantee their advance into the finals but if they lose and cannot secure a bonus point they could be overtaken by the Brumbies, Force or Chiefs.