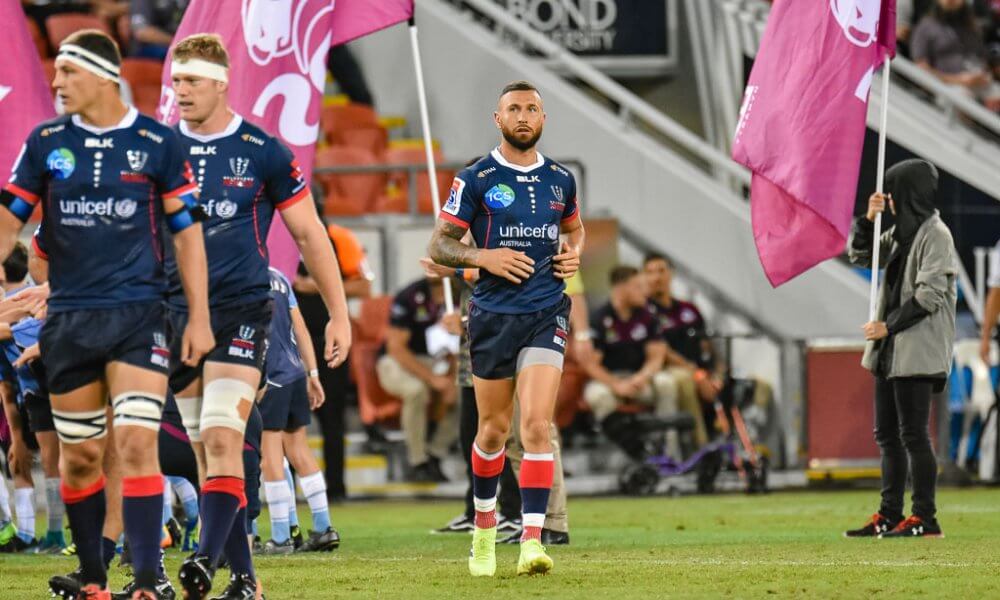 The Melbourne Rebels host the Queensland Reds in a battle to decide who will top the Australian conference.

The teams met earlier this year, with the Rebels handing the Reds a considerable spanking 32-13.

The Rebels come off two losses to the Waratahs and Hurricanes.  In both matches, the Rebels played a fabulous 40 minutes of Rugby but somehow forgot that Rugby is an 80-minute game.

They started well against the Waratahs, but allowed their opponents to control the game in the second half, and eventually lost by 3 points.  Against the Hurricanes, they were blown off the park in the first 20 minutes, with four massive tries. To their credit, they fought back and nearly snatched an unlikely victory.  Sadly, the fairytale comeback was not to be, and they remain winless at the cake tin.

The Reds come off an excellent tour of South Africa, beating the Sharks in a tight contest 21-14. They returned home to host the Sunwolves in the infamous “house of cards” match, winning in a surprisingly tight game 32-26. They now sit two points behind the Rebels and Brumbies on the Australian conference ladder.  If there is one thing that Reds fans can take from both matches, their team can grind out a tough win.  It might not be pretty, but a win is a win.

The Rebels welcome Billy Meakes at inside centre, shifting Reece Hodge to outside centre. Luke Jones switches back to blindside flanker, with Ross Haylett-Petty moving into the loose lock role. Richard Hardwick has recovered from his head knock and takes his place on the reserve bench. Tom English joins team rehab with a calf niggle.

As an aside, I love seeing Pone Fa’amausil named as a reserve loose forward.  There is nothing better in this world than watching a tighthead prop go charging up the fill, at speed and ball in hand.  I’m hoping he can emulate his effort last week, which set up the try for Meakes.

For the Reds, Angus Blyth has his first starting cap at lock, covering for the suspended Harry Hockings. The experienced JP Smith comes in for Harry Hoopert, adding some starch to what looks like a good front-row battle.  Its interesting to see Issac Lucas, fresh off Austrlain U20 commitments, is back on the bench for the Reds.  He might have earned a rest this week, but it appears the Thorny one has other ideas.

Who should we keep an eye in this match?

The different playing styles of Kerevi (bash & crash) and Meakes (agile dancer) will make for an entertaining context in the midfield. If it wasn’t hard to stop him, Samu has added some fancy footwork to his game, making the job even more terrifying for the defending team.

Contrast this against Billy Meakes. He’s building a great combination with Quade, and mixing up crash ball with an amazing knack to find gaps through the gain line.  The impact he made of the bench against the Hurricanes not only confirms why he needs to start but the standard he must play at against Kerevi, if the Rebels are to win the midfield battle.

I think all Victorian Rugby fans were sad to see super Sefa head north, but for me, I’m glad to see him playing some great Rugby. The pace and handling seen in his first season of super rugby is coming back, making him an irresistible choice  for a spot in the RWC squad.

He will have an enormous challenge against Maddocks this week. The mad dog of Melbourne can match him in pace, but poses a more dangerous option across the back three.  Look for Jack to unload his massive boot, and even a slips catch for another try.  Equally, Jack must be aware of Sefa’s line speed and ensure he doesn’t get caught out, as has occurred a few times this season.

Tate McDermott is the rising star of Australian halfbacks. Since he secured the starting halfback role, he’s played a key role in recent Queensland success, through his service from the forwards, or scoring tries. He’s now described as the premier Australian halfback under 30. A big call, but can he be number 1?

The man standing in his way is Will Genia, Australia’s premier scrumhalf for nearly a decade. It’s quite simple; when he plays well, well when the Rebels pack give him front-foot ball, the Rebels do well. On top of his deft skills, his ability to communicate and inspire (rev-up) his teammates play a big part in the Rebels success.

Whatever halfback can get their forward pack humming will go a big way to deciding the winner.

The prize is simple here; win, and you lead the Australian conference. Lose, and you will probably struggle to earn a wildcard. The Reds picked up a win in the republic and survived a card fest against the Sunwolves, but they’re facing their biggest match in weeks.

The Rebels return to the stockade, ready to get their season back on track. The Rebels have way too much class on the field and on the pine but must click early to earn the win. Given the stakes at play, I think the Rebels will rise to the challenge, and win by 7 points.