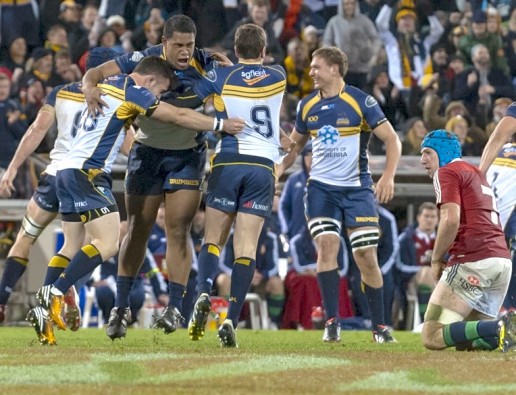 How could we not do Brumbies player ratings after a win like that over the British and Irish Lions? With this historic victory, there’s even a 10 on offer (which may be the second time ever on G&GR)!

Before you go with the Lions supporters who write this off as a sideshow and of little importance, remember that the Lions fielded 550 caps against the Brumbies 28 (between two players).

The one problem is that it was such an ensemble performance, it’s hard to single players out. But OK, if I must.

Monstered Matt Stevens at one stage in the first half. Just managed to pull it back after the Lions bench was emptied. Also strong around the park. 7

Good solid match – lineout throwing only went wonky when he left the field. 6

You’re a Super Rugby rookie anchoring your scrum against an international front row. Did well until Lions emptied their bench. 6

Played his part in getting into the Lions faces – didn’t take a step backwards. 6

The Cart-horse delivered again. Bashed his way with ball in hand and in defence. Works in the darkest places. 7

One of Australia’s best breakdown forwards. Playing at six again gave him the chance to shine, and he did. 8

This guy has taken his chances with both hands – to the point where I believe he may be the most rounded openside we have in Australia. Was a handbrake on the Lions breakdown. 8

Whatever deal he did with the devil for this form he’s had, it was worth it. Rory Best will be seeing his face in lineouts for years to come. Even his grubber kicks came off. Led with passion. 10 G&GR MOTM

Gotta think the occasion may have gotten to the usually solid scrummie’s service. Did get away with some outrageous scrum feeding though. 4

Everything about this guy says “test match 10” including the poise and decision making. Twelvetrees spent a night behind the gain line thanks to his excellent defensive timing. In gold soon. 9

While not a big night for Brumby winger participation, he lived up to the 92 per cent of the Brumbies test caps he brought to the table. Valued impacts. 7

His outside partner will get the plaudits for the try, but Smith’s deft first touch started Wade’s tailspin. Key block in the midfield wall. 7

From the moment he told Wade to speak to his hand, Kuridrani had a belter in both attack and defence. Surely making international selectors take notice? 8

Like Clyde, didn’t get a bundle of touches and maybe got too eager once or twice when they appeared. Still worked hard all night chasing kicks and hitting rucks. 6

With Nic White out, all kicking duties fell to him and he stepped up manfully, taking on goal kicking as well. That final “check-side punt” (steady Marto) was a thing of beauty. 8