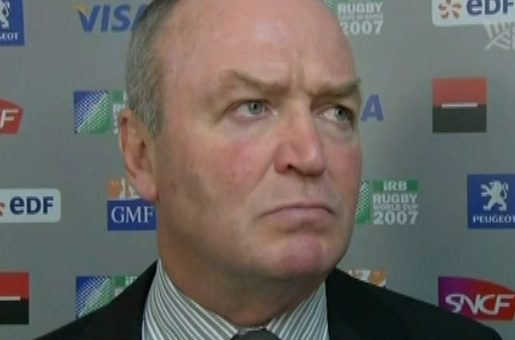 Graham Henry’s recently released book includes the revelation that Henry thought the refereeing of New Zealand’s quarter final loss to France in the 2007 Rugby World Cup was so bizarre that there may have been matching fixing involved, and that watching footage of the decisions in the match had made him physically ill.

Whilst the history books show that France won the match 20-18 and the penalty count was 8-2 in favour of France, Henry now claims that France committed a significant number of infringements in that match that were not penalised, and that had the most obvious of those been penalised, the score would actually have been no worse than 42-6 to New Zealand.

If you were able to go back in time and change one decision in a series of events could you really be sure what the effect would have been on the remainder of the series of events? How could you know for sure that a penalty attempt would have been successful? How could you know that from the lineout after a penalty the attacking team wouldn’t have dropped the ball before scoring a try? You couldn’t, so in my opinion any recreation of the score in a game is invalid.

There are numerous infringements in every match that do not get penalised at all levels of the game. If every infringement was penalised in a match there would be very little rugby played apart from shots at penalty goal. I think a referee has to make a judgement about the impact an infringement has on a match – if there is no impact on the play, then play on.

In our game decisions are made on the run by the officials – they don’t have the luxury of stopping play and going back over the footage in slow motion or frame by frame (unless it’s a decision regarding a try). I don’t think there’s much point in analysing decisions by officials post-match on a different basis to the way they have to make them.

Graham Henry obviously sees it differently – he’s identified every infringement by France based on his extensive analysis of the footage, which he says allows him to conclude what the score would have been in the match – that’s some crystal ball he has! 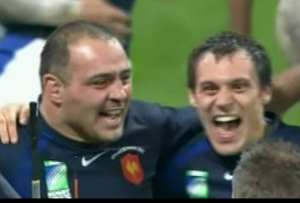 I hadn’t watched the match in full before Henry’s comments were reported. Sure, I’d seen the furore over Wayne Barnes’s refereeing and I’d seen the highlights including the missed forward pass in France’s final try, but I found it hard to believe that the officials could have been as one-sided as Henry believes. When I did watch the match in full I saw plenty of mistakes made by the officials, but I saw a lot more than Henry claims.

I decided to examine the match in detail, and whilst Graham Henry only focussed on infringements by France I made sure that I considered infringements by both teams. Having completed that exercise I looked at what impact all of the decisions or non-decisions had on the match, even though, as I said, I think any such recreation is invalid.

This article summarises the findings of my analysis but you can download the full report here. For those who question my findings, I hope you take the time to read the full report to see the detail supporting my summary.

Of course the laws in 2007 were slightly different to those of today and interpretations were also different. My references to laws in this article are to the current laws (unless the law has changed) so that you don’t have to go searching for a 2007 law book.

In conducting my analysis I first cut up the match footage into clips of every play. Then I examined each of those clips frame by frame – that’s 25 frames per second, which allows you to see a lot more detail than you do watching an event in real time or even in slow motion. Whilst most of the footage only has one camera angle there is also plenty of footage where the three camera angles Henry says he used in his analysis are also publicly available.

So, even though I only found 32 infringements by France that were not penalised, there’s no doubt that Henry’s claim regarding France not being penalised for numerous infringements is correct. If you think you know the extra eight infringements Graham Henry might have found, let me know. 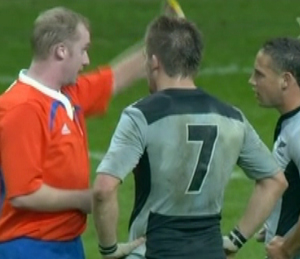 That’s 37 infringements by New Zealand in the match that weren’t penalised – that sheds a different light on the match, doesn’t it!

How does Henry calculate his revised French score?

The first penalty from which France kicked a goal was awarded in the last play before halftime when Ali Williams was penalised – infringement number 45 in the table below.

The second penalty from which France kicked a goal was awarded when Luke McAlister was penalised for deliberately obstructing a French attacker and was subsequently given a yellow card – infringement number 54 in the table below.

I agree with Graham Henry’s assessment – these were both infringements that should have been penalised.

My full report includes a detailed assessment of whether France’s two tries should have been awarded. There are problems with both, but the alleged forward pass in France’s second try wasn’t as clear-cut as it may have seemed at first.

Rule out both of those tries and France would have scored a maximum of six points, as claimed by Graham Henry.

New Zealand scored 18 points from two tries, one conversion and two penalty goals. So we need to find another 24 points to get to the 42 points Henry claims they should have scored.

The most likely explanation for those 24 points is an additional two tries, one of which would have been converted, and four penalty goals. My full report details the six most likely plays Graham Henry might claim led to those possible penalty goals and tries.

How many infringements did each team commit that occurred first in a possession sequence?

I’ve established that if the earliest infringement in a possession sequence had been penalised there are infringements that occurred later in the same possession sequence that would not have resulted in penalties. On that basis, instead of the 79 infringements I found by both teams, the total for the match would have only been 44. New Zealand infringed 28 times in the match and were penalised for five of those whilst France only infringed 16 times and were penalised for two of those.  So New Zealand infringed first nearly twice as many times as France!

As far as I’m concerned the claims by Graham Henry of refereeing bias against New Zealand in this match are not balanced or credible. They completely ignore the infringements made by New Zealand that were not penalised, which I’ve shown could have had a significant impact.

Yes, the officials made mistakes and missed plenty of infringements, but it was France who was disadvantaged most when it came to infringements not being penalised.

Perhaps Graham Henry thought no one would take the time to examine his claims more closely. I would have hoped for more from a man with his standing in the game!