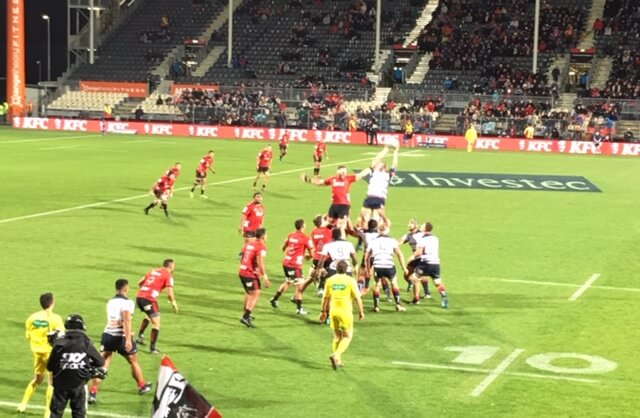 The Rebels crossed the ditch in an effort to keep their dwindling finals hopes alive.

The Rebels come into this match after a close loss to the Waratahs the previous week. A win would have been an almost certain ticket to finals footy for the first time, but now the road is a lot harder.

Meanwhile, the Crusaders return from Fiji, wounded after suffering a shock loss to the Chiefs. This was also Ryan Crotty’s 150th Super Rugby game, so they wanted a win even more.

The match started off fairly evenly with a fair bit of to’ing and fro’ing. The Rebels actually had the first opportunity to score via a penalty kick attempt by Reece Hodge, but it sailed wide and with it the only chance the Melbourne boys had to get first points on the board.

Come the ninth minute and Sevu Reece strolled over for what would be the first of eight (count ’em, eight) tries for the Crusaders back three. Richie Mo’unga converted and the Crusaders were well and truly on their way. Tries followed for David Havili and Braydon Ennor to keep the scoreboard ticking over. If things weren’t looking grim enough for the Rebels, Adam Coleman was substituted off in the 33rd minute with a shoulder injury.

On the half-time siren the Rebels tried to keep the ball alive, which they did, straight to the Crusaders who finished off the half with a try to Ennor, his second for the night.

Isi Naisarani – one of the few Rebels who shone.

The teams headed off to the sheds with the Crusaders holding a commanding 26 to nil lead. The Rebels needed to turn things around and fast.

Sevu Reece bags a hat trick for the Crusaders.

It couldn’t get any worse, could it? It could and it did.

Without going into too much detail (because it is late and my anger hasn’t subsided) the Crusaders piled on another 40 unanswered points in the second half via six tries, most of them out wide, exposing the weaknesses of the Rebels’ wing defenses. The Rebels did have their chances, but too often they blew them by trying to be clever and play like the home team. Only problem is, they aren’t anywhere near as good as the Crusaders.

The icing on the turd cake was a try at full-time to Ryan Crotty, celebrating his 150th game. It was like it was a Hollywood script, even going so far as Crotty having an attempt at converting his celebratory try and… well, bugger me he kicked it. The final siren sounded and it was off to the pub to celebrate (if you were a Crusaders fan, that is).

Back to the drawing board for Rebels head coach Dave Wessels.

66 to nil. Let that sink in for a moment. The Rebels have had their fair share of big losses before, but to be held scoreless against such a big score really bites.

Sure, Genia was being rested, with Cooper and Koroibete coming off the bench, so the task was always going to be tough, but no one would have thought it was going to be this bad for the Rebels.

A bloke sitting next to me at the match snugly said to me “hey bro, if you happen to make the finals, it is likely you will have to come back over here to play the Crusaders”.

Not sure there was one, really. I guess after Sevu Reece’s try in the ninth minute it was all downhill from there and the Rebels never got a look-in.

Who do you pick? From the Crusaders, obviously. Their back three were responsible for 8 of the Crusaders (gulp) 10 tries, so I am giving this to the Men of the Match; Braydon Ennor, Sevu Reece and David Havili.

Seriously, this is difficult. Despite the horrific loss, Isi Naisarani and Jordan Uelese had decent games in a well-beaten team. Naisarani, especially, had some strong carries and his tackling was far superior to that of his teammates.